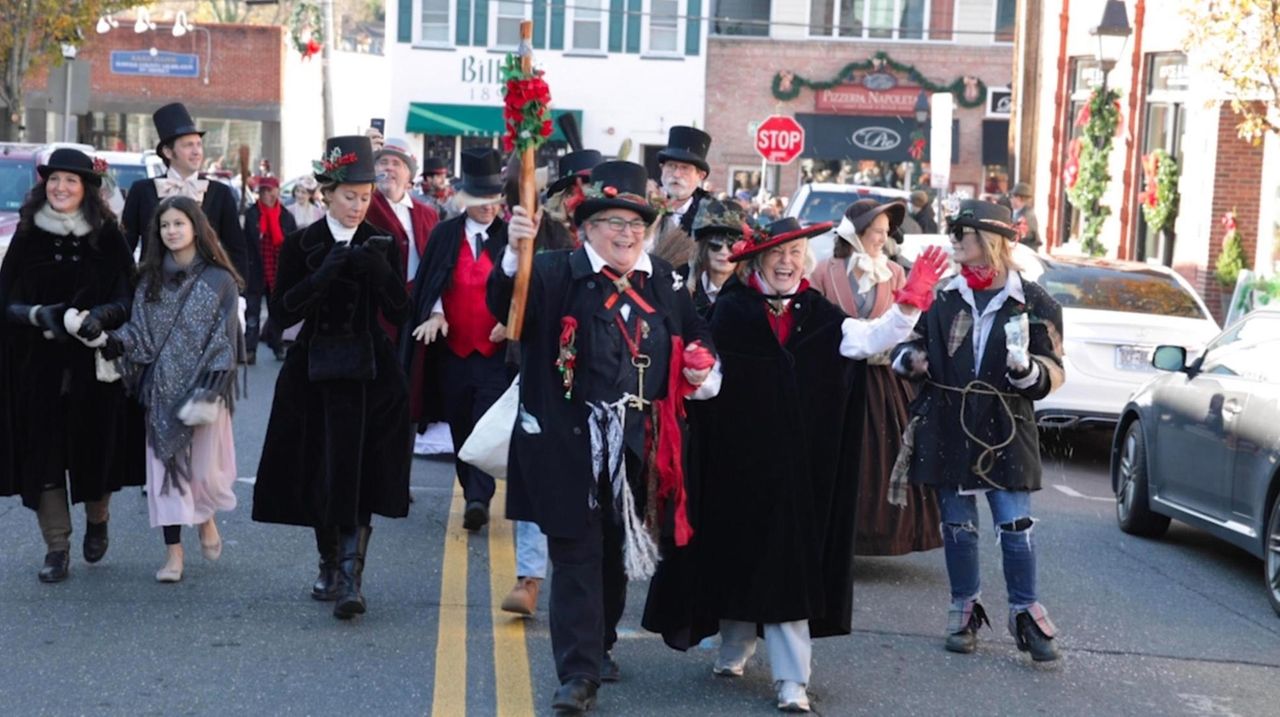 Ready to have a Dickens of a good time again strolling the Port Jefferson harborfront? The Charles Dickens Festival returns on Dec. 4 and 5 with 129 events including magic, train and craft shows and a ghostly puppet parade saluting the life and works of the celebrated Victorian author.

"Everybody wants to get back to normal, and this is a giant, happy celebration that people are ready to come on out and enjoy," says Allan Varela, festival producer and chair of the Greater Port Jefferson-Northern Brookhaven Arts Council.

"Post-pandemic, it was imperative to reinstate our beloved Charles Dickens Festival," says Mayor Margot Garant, whose mother, former mayor Jeanne Garant, created the festival, now in its 25th year. Garant says village streets will be decorated with ribbons and garlands, restaurants will be serving holiday menus and carolers will be roaming the streets on festival days.

With downtown parking expected to be scarce, a free jitney will be running in a loop service all day making stops at the Port Jefferson Long Island Rail Road station and downtown, Varela says. He adds festivalgoers are encouraged to wear masks at indoor activities.

The colorful, multilayered exhibition by the Port Jefferson Station-based Reed Family Train Project is back on track after the death in March of Marie Reed, of cancer at age 57, says her husband, Charles Reed.

Reed decided to continue in his wife’s memory with the elaborately decorated tables of O- and HO-gauge model trains, including "the biggest display, which looks like a wedding cake, with trains going in three different directions." Younger railroad buffs can marvel at The Polar Express, Snoopy’s Christmas and NASCAR themed layouts, says Reed, who is assisted by his son, William and local Boy Scouts.

The pandemic seems to have lit a creative fire under Lisa Seckler-Roode of Mount Sinai, a weaver and the organizer of this annual showcase of 19th-century artisanship.

"I spent the entire pandemic knitting in my house, and I have 46 hat and scarf sets that I’m going to be selling," Seckler-Roode says.

Seckler-Roode adds that with a Victorian-style hat-maker also on hand, festivalgoers will see "how clothing was made during the Dickensian era."

A sparkling panorama of 25 six-and-a-half-foot tall artificial trees adorned with white lights will be decorated by local merchants and nonprofits with traditional ornaments, seashells, gingerbread, sunflowers and more, says Barbara Ransome of the Greater Port Jefferson Chamber of Commerce.

"They are very clever," Ransome says of themes such as "Gnome for the Holidays" with gnome figurines surrounding the tree.

"A Christmas Carol" and Street Characters

The heartwarming Christmas classic can be seen on the street or inside a theater, with either a hand-operated or real live Tiny Tim.

If you want your Dickens short and al fresco, a troupe of 115 locals costumed as flower girls, chimney sweeps and other street characters, are performing 10- to 15-minute street plays of "Oliver Twist," "The Pickwick Papers," "Bleak House" and "A Christmas Carol" — the latter with a local five-year-old boy playing Tiny Tim. Troupe members will also be caroling downtown.

This year’s festival will march into history with the second appearance of a quartet of giant puppets, which debuted in 2019. Ten feet wide, mounted on carts, with frightening faces and puppeteer-operated hands, Jacob Marley and Ghosts of Christmas Past, Present and Future were created with 3D computer technology by Gen Varela of Port Jefferson and Vin Blangiardo of Port Jefferson Station.

"The Ghost of Christmas Past has a candle flame head," Allan Varela marvels.

Two new cheese stores open on LI
5 things you need to know about Winter Restaurant Week
10 events, things to do this weekend on Long Island
Food critic tries fast food's spiciest new sandwiches
Didn’t find what you were looking for?