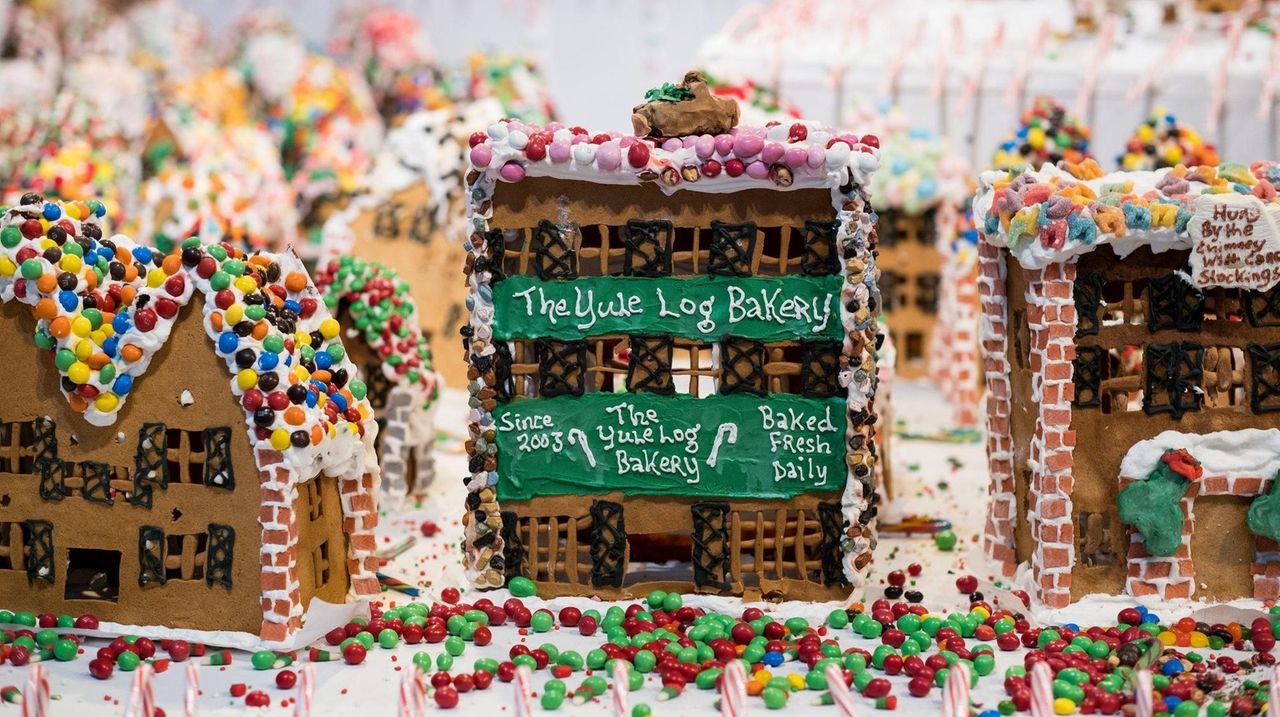 The Guinness World Record holder for the biggest gingerbread village made entirely of edible ingredients has created a village for the Long Island Children’s Museum — 500 structures incorporate more than 1,400 pounds of icing, 2,000 sticks of gum, 900 candy canes and 8,000 jelly beans.

GingerBread Lane features stores such as The Yule Log Bakery, Frosty’s Sno-Cones and Prancer and Dancer’s Academy of Dance. Creator Jon Lovitch of Forest Hills, Queens, says he also included buildings with meaning for him, such as a pumpkin spice latte coffee shop, because he can’t get enough of that drink, and the Everyday's Thanksgiving Café, which serves his favorite holiday meal year-round.

This is Lovitch’s 47th GingerBread Lane display, so he works in the number 47 that visitors can search for. For instance, the Fire House holds Engine 47 and Frosty’s Sno-Cones has 47 flavors. And all the clocks say 7 o’clock — because when Lovitch was a kid, that’s when his favorite TV shows aired.

"If you’re a kid, it’s very whimsical, it’s very fun," Lovitch says of GingerBread Lane. "It’s like something out of their imagination."

Lovitch hooked up with the Garden City museum after the New York Hall of Science in Queens, where he had a holiday season gingerbread display for the past eight years, couldn’t reopen due to COVID-19. "That left us homeless as it were," he says. Lovitch, who has a 2-year-old daughter, remembered a trip he and his wife, Judy, a veterinarian, took to the Long Island Children’s museum to entertain Cecilia, and he thought the museum might be interested in taking on the exhibit instead. "They were like, ‘Absolutely. We’ve been looking for an anchor holiday attraction,’" Lovitch says.

With so many holiday activities on Long Island canceled, the museum jumped at the chance to host a display that is joyful but not based on touch, as many of the museum’s interactive exhibits are, says Maureen Mangan, museum director of communications and marketing. "It’s been a challenging year; we wanted to do something for a sweet ending. People need something to focus on that’s happy and positive," Mangan says. The exhibit smells like gingerbread and holiday music is playing. "It’s a feast for the eyes and ears."

Katherine Klement, 35, a stay-at-home mother from Port Washington, visited the display recently with her children, Lilliana, 3, and Aiden, 1, and said they were "in awe." Matt Korsky, 40, a business owner from Levittown, took his children, Madison, 7, and Liam, 3, and recommends going through the exhibit twice, once to see the overview of the village and again to focus on individual buildings. "I was blown away with how much work and detail went into each one," Korsky says.

Lovitch, a former executive chef at locales including the famed Algonquin Hotel in Manhattan, pivoted to making GingerBread Lane displays full time about five years ago. He bakes all the GingerBread himself in his kitchen; he shops for candy after every major holiday when stores slash prices. It takes him the entire year to design and execute his villages. In a typical year, he’s displaying villages at various venues nationwide. He has broken his own world record mulitple times, most recently in 2017 with 1,251 structures, and he still holds the title.

GingerBread Lane will be at the museum through Jan. 3, 2021. This year’s display is a pilot test, and if it goes well, the village may be back for the holiday season of 2021, Mangan says. If that happens, Lovitch says he will add Long Island related, nautical theme gingerbread creations including a lighthouse, boats and more.

The museum is operating at 25% capacity, capped at 325 people at once, Mangan says. Visitors sign up for a time slot between 10 a.m. and 3 p.m. Thursdays through Sundays, with the hour from 10 to 11 a.m. reserved for museum members.

On Saturdays and Sundays, from 10:30 a.m. to 12:30 p.m., a pop-up activity will offer children activity sheets on which they create a gingerbread house using stickers. They can complete the project at socially distanced tables at the museum or take it home to do.

Inspired to make your own gingerbread house at home? Jon Lovitch offers these three tips:

1. “The biggest tip I offer is don’t try to get it done in one day. If you try to get it done in one day, it’s just going to keep falling apart and breaking.” Lovitch recommends putting the house together using icing and allowing it to harden until at least the next day before decorating it — make it on Saturday and decorate it on Sunday for a fun weekend activity. “The icing takes time to dry. It’s like concrete. I don’t ever decorate anything until it’s several days or several weeks old. I want these things to be as solid as they can be before I decorate them.”

2. Buy or make extra icing if you are using a kit. “They never give you enough icing.”

3. Just have fun. Don’t put pressure on yourself to achieve a preconceived notion of what your house should wind up looking like.