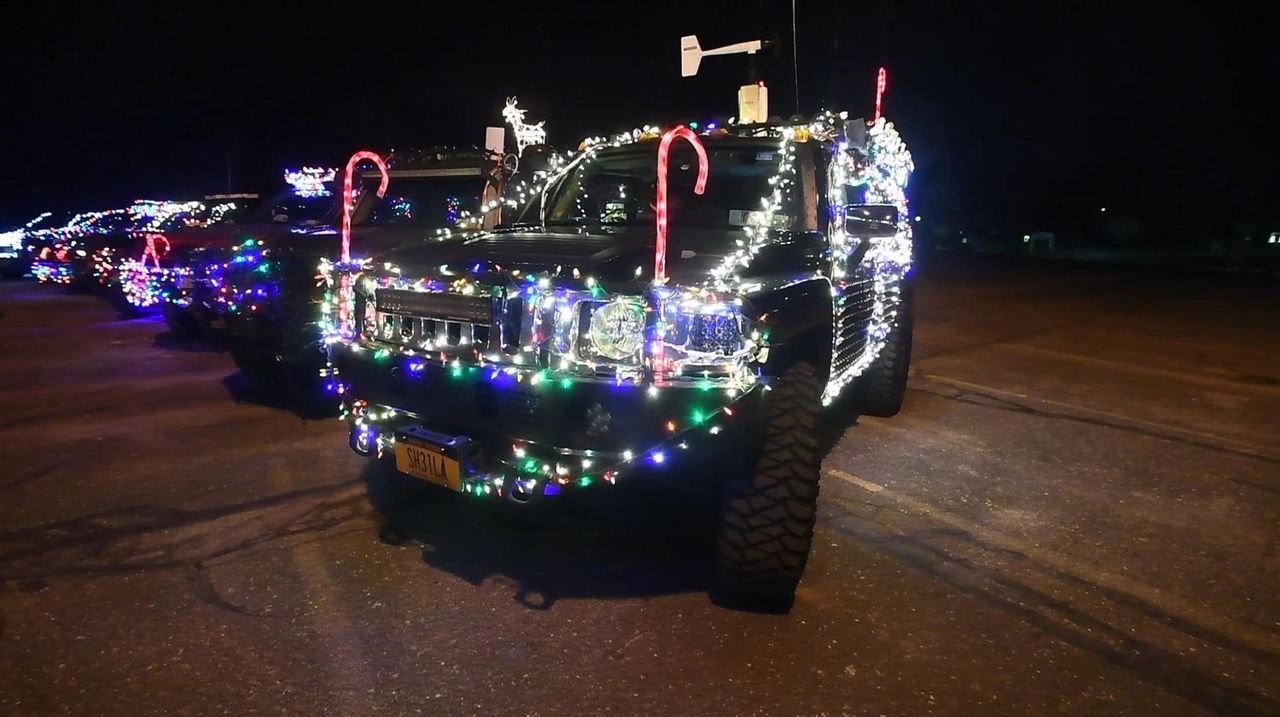 A group of holiday enthusiasts has covered their trucks and SUVs in multicolored lights and created a 20-vehicle holiday convoy that travels around Long Island in an effort to spread the spirit of the season through illumination. Raymond Schettini started the convoy 10 years ago and the group travels, one to two times a week, visiting charity runs, tree lightings, fire department parades and holiday fundraisers, and putting on a show. Credit: Newsday / Thomas A. Ferrara

Never mind Santa's sleigh, see if you can spot the Christmas Convoy traveling around Long Island. This group of holiday enthusiasts has covered their trucks and SUVs in multicolored lights in an effort to spread the spirit of the season through illumination.

“This is literally all just for fun,” says Raymond Schettini, 27, of Smithtown. “We want to light up Long Island.”

Schettini started the convoy 10 years ago when he decorated his Hummer while he was a student at Smithtown West High School. “I wanted to get festive and put a strand of lights on my front bumper,” he says. “The next year I put on four strands, then I just kept adding lights.”

Throughout the decade his friends began to join the convoy, trying to outdo each others' light displays. Today they travel around in a pack, one to two times a week, visiting charity runs, tree lightings, fire department parades and holiday fundraisers, and put on a show.

“People really get a kick out of it,” Schettini says. “They wave and cheer us on.”

But Schettini doesn’t just have regular Christmas lights on his truck — he has digital screens with lights that move in sync to music being pumped out of the speakers atop his vehicle. There’s even a pyrotechnic canister that shoots out flames on the roof.

“I can scroll text messages and pictures across the screen,” Schettini says. “I blast Christmas music as well as country and rock in order to  mix it up a bit.”

Brian Sheridan, 22, of Smithtown has been friends with Schettini his whole life and joined his convoy five years ago by covering his 2006 Honda Ridgeline with 500 lights and an inflatable penguin in a Santa hat.

“I think the adults enjoy it even more than the kids,” he says. “It’s something completely different from lights on a house.”

Meanwhile fellow convoy member John Leslie, 35, of Selden says, “I don’t put any Christmas lights on my house, they all go on my truck!”

Leslie has a wheelchair accessible 1992 Dodge Grand Caravan that he draped with 1,000 lights plus a special green bow representing cerebral palsy because he works as certified nursing assistant caring for Darrell Little, 13, of Selden. Despite Little’s condition, he rides along with Leslie.

“Darrell loves it,” Leslie says. “He even takes videos for his own YouTube channel.”

Chris Botto, 26, of Selden was the first to join Schettini’s convoy covering every door and quarter panel of his 2000 Nissan Xterra with 4,000 lights.

Working as a plumber in Hicksville, he has a daily hour commute and often finds himself stuck in traffic when he turns on the lights getting honks and thumbs-up along the way.

“It’s such an overwhelming feeling to make people happy during the holiday season,” Botto says. “I’ve never had anybody not react positively when they see my truck.”

In addition to the lights, the convoy packs candy cane "cannons" that allow their trucks to shoot out the holiday treats from a distance.

“We are just trying to drum up some Christmas cheer,” Schettini says. “Everyone could use a smile on their face this time of year.”

What to eat (or not) at LI's first Topgolf
Gourmet grilled cheese spot closes after 5 years
Families can paint outside together at 'Draw Out' at LI park
Great places to get ice cream on LI
This apricot chicken recipe will please a crowd
10 events, things to do this weekend on Long Island
Didn’t find what you were looking for?