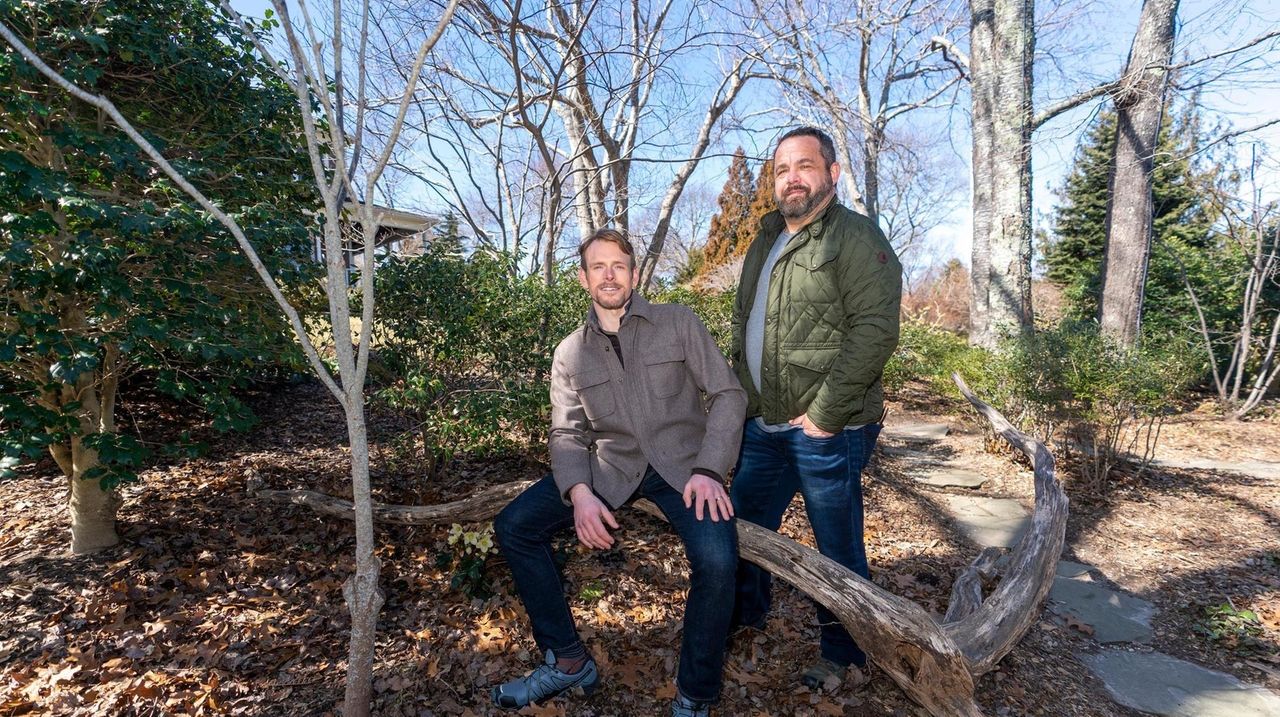 Adam Bundy and James Marshall share the secrets of their Shelter Island garden, where things bloom all year long. It's a therapeutic environment for themselves and others, they say, melding past and present and celebrating wabi-sabi, the Japanese view of the impermanence of life. Credit: Randee Daddona

Home gardens come to life in spring, when tulips and daffodils bloom alongside the occasional rhododendron or forsythia and the inevitable dandelion. Summer brings a burst of color that typically is enjoyed until mums and fleeting ornamental cabbages are planted alongside ubiquitous pumpkins — then all goes dormant. But there’s a special garden on Shelter Island that never sleeps.

From a distance, the ribbonlike flowers of witch hazel command attention: ‘Jelena’ is the first variety to bloom, its blazing copper waxy blossoms wrapped around bare branches. ‘Aurora’ is next, its yellow-orange flowers perfuming the frigid air with a scent reminiscent of freesia transported through the garden by winter’s perennial winds. Both were strategically placed to be viewed through the home office and kitchen windows.

"It’s important to put plants that have the most interest where you will see them the most," explained James Marshall, who shares the center-hall Colonial on this 1-acre property with his husband, Adam Bundy. Enjoying the garden from indoors "can help take away some of the stress of Zoom calls and meetings during winter," he added.

Marshall, 40, grew up on a horse farm in Michigan where he became fascinated with plants at an early age, his interest nurtured by a hobby horticulturist neighbor who taught him how to graft trees when he was 5. After moving to New York City to study the bassoon at The Juilliard School and later, New York University's Tisch School of the Arts, Marshall became passionate about climate change. He altered course, pursuing a master's degree of public administration in environmental science and policy at Columbia University and working in information technology to help companies use data to develop climate-change strategies.

Clockwise from above: In fall, blazing colors light up the arboretum, anchored by a large weeping European beech tree; in spring, the wild and informal "woodland walk" comes to life; in summer, a "cottage garden" fills the property's fenced-in pool area with color. | Photos by Adam Bundy

Marshall rented a small cottage near Coecles Harbor, on the eastern side of Shelter Island, during the summers of 2008 and 2009. Later in 2009, at 29, he said, he bought a nearby house and left the city entirely for "this bizarrely magical island."

At the time, much of his property was inhabited by "deformed vine-covered trees, cat briar and weeds," Marshall explained. So he removed them, along with much of the lawn, but retained the mature black and Yoshino cherry trees, red maples, black oaks, Japanese cedars, spruces and rhododendrons as a foundation. He also kept a rose garden that surrounded the fenced-in pool area and poured sweat equity into building a stone staircase to that area from the driveway, losing a few fingernails in the process.

"It was a liberating time of clearing and cutting by hand, where I intimately got to know the property through blood, sweat and the joy of hard labor," he said.

Yet it soon became clear this was not a job for a lone gardener. Marshall hired Kevin McCafferty, a local arborist and designer, and together they developed a woodland walk garden on the property.

"Like a chess game," Marshall said, "layer by layer" the pair strategized the planting of trees, shrubs and perennials into beds lined with raw wood chips upon which a mushroom colony would be nurtured. Eastern red cedars and broadleaf evergreens, like native hollies and inkberries, were planted "to provide a green background," he said.

Marshall began researching and read "Dirr’s Encyclopedia of Trees and Shrubs," a gold-standard reference written by University of Georgia horticulture professor Michael Dirr. The book led Marshall to "the magical discovery that there were plants that could bloom in all four seasons in the Northeast, especially the winter-flowering Hamamelis genus of witch hazels. I decided then and there that this garden would be designed to have something in bloom every month of the year," he said, "unlike the typical Hamptons garden that focuses mainly on summer-blooming" plants.

While designing the garden, Marshall became fascinated with how "moonlight revealed new elements of the garden" and strove to replicate that natural effect on his property. That interest led him to found Corinthian Design Group, a landscape lighting design company.

Clockwise from above: James Marshall, left, and Adam Bundy savor the quiet of a grove of Japanese cedars in their Shelter Island garden with their dog, Layla; their home sits on an acre on Shelter Island; Bundy, seen here amid giant pussy willow and witch hazel, has taken to photographing their gardens to share on social media. | Photos by Randee Daddona (grove and Bundy) and Adam Bundy (home)

One lighting job in 2018 serendipitously took Marshall to Lexington, Kentucky, where he reconnected with an old colleague, Adam Bundy, a former Marine who works as a cloud computing executive. Bundy, too, loved the outdoors, having grown up in woodsy western Pennsylvania, and the two hit it off. Marshall invited Bundy to visit him — and his gardens — on Shelter Island, and the couple were married in July 2019.

Today, the gardens comprise separate "rooms" and paths that encircle the property, encouraging a stroll from one to the next. The woodland walk, which boasts Christmas roses, hybrid witch hazels, inkberry and winterberry holly during the darkest months, greets visitors in front of the house with a blooming Cornelian cherry dogwood in early spring.

Turning the corner reveals an Asian garden with an American spin: Franklin trees, which have not appeared in the wild since 1803 (and are named for Benjamin Franklin), lend camellia-like white flowers with egg yolk-colored centers from August to November, when a rainbow of fall foliage takes over. A succession of witch hazels blooms there over winter, and Natchez crape myrtles light up the space in summer, their white blossoms punctuated by a dry Japanese stream bed made with white beach stones.

Continuing on, one encounters the pool area with its cottage garden, where Marshall and Bundy allow spent seed heads to remain on plants during winter to be enjoyed by birds — and those inside taking a work-from-home window break. A Harry Lauder’s walking stick, with its bare, mangled and twisted branches, and catkins provide eye candy in late winter, and large boxwoods, "cloud pruned" to create layers and paths within them, are a spectacle any time of year.

Beyond the pool area is a small path that leads to a grove of three large Japanese cedars in the arboretum. Their shedding branches and burgeoning cones create a winter display against an evergreen backdrop. As one emerges from that grove, a Persian ironwood, blooming at the beginning of March, takes center stage. And as if its bright, burgundy blooms weren’t enough, it delights with four colors of exfoliating bark and oddly fused branches.

Marshall and Bundy’s garden also includes sculpture. Embracing the garden "as a form of personal storytelling," Marshall said some pieces are a nod to his family having been in the scrap-iron business in Michigan. Among others is "The Prophet," created by Shelter Island sculptor Hap Bowditch.

"People back home in Kentucky and Pennsylvania cannot believe where we live," said Bundy, 49, who has embraced his new home by making friends with everyone from neighbors to shopkeepers and servers in nearby restaurants whom he enjoys taking on walks through the property. "We had our wedding reception here, and people saw the garden," he said, adding that before long, "people were asking friends of friends to see it, and word got out." The Shelter Island History Center will be holding its garden party on the couples’ property at the end of May.

Bundy also has embraced photography, gaining local acclaim for his talent. His photos of plants, the moon, sunsets, harbor seals and other goings-on in the natural world have been published in Newsday, including with this story, and Shelter Island Reporter. He routinely pairs his images with "sayings or proverbs to help people" and posts them in the Shelter Island Local Facebook group. "People come to me and are so grateful," Bundy said. "They tell me, ‘I didn’t know such intense beauty existed over the winter until I saw your photographs.’ "

Among his subjects are the wildlife that visit the property. "In the winter, we have the blue jays, the cardinals, tufted titmice, woodpeckers and squirrels all around. And we have fox and wild turkeys on the perimeters," said Bundy, who feeds the birds multiple times a day.

Since moving to Shelter Island, Bundy has discovered another talent: floral arranging — with a twist.

"Adam brought me back to a connection with the garden and of the story it could tell by bringing it indoors," explained Marshall. He doesn’t "get rid of everything that isn’t fresh or new. He brings in dry stems and wispy seeds." Explaining his viewpoint, Bundy added, "just because it’s dead, doesn’t mean it isn’t beautiful."

"That’s the gift of aging with your garden," Marshall said. "The joy of studying nature is that there is always a discovery to be made, whether scientific or spiritual, and it's often a mirror back onto oneself. If you let them, gardens teach you wabi-sabi — [the traditional Japanese view of accepting] imperfection, impermanence, not to fear death or decay but embrace life’s cycles. There is a lesson and beauty in weathering, in rust, in patina, in a dead branch, in lichen and moss."

James Marshall and Adam Bundy nurture gardens that provide "peace and mindfulness" year-round, with special attention to extending those benefits through winter. Here are some of their favorites for four seasons of interest. If you’d like to enjoy them in your own garden next winter, you’ll need to plan ahead with spring planting.

Clockwise from above: Autumn Brilliance fern unfurling with mature fronds behind it, Christmas fern, new frond unfurling, and 'Sulphureum' Barrenwort at the base of center small Carolina Silverbell tree. | Photos by Adam Bundy

Clockwise from above: The red bark of the ‘Natchez’ crape myrtle, a Paperbark maple branch with exfoliating bark and a Persian Ironwood tree. | Photos by Randee Daddona ('Natchez' and ironwood) and Adam Bundy (paperbark)

Unusual or colorful stems and berries

Clockwise from above: The kitchen window frames seasons of color, with a view into the Asian Garden and the ‘Natchez’ crape myrtle; a blue jay is attracted to Adam Bundy's feeder; a winter arrangement using dried flowers from the garden — PeeGee hydrangea, agapanthus and Japanese anemone. | Photos by Randee Daddona

Check out Jessica Damiano's take on planting your own "victory garden."

Play games at a pinball arcade, more things to do this weekend on LI
8 places with new outdoor areas to eat at right now
0:57
Chef at Organic Corner in Massapequa talks vegan eats
0:57
LI eateries serving stand-out vegan dishes
Holbrook brewery teams with musicians to raise suicide awareness
1:22
Car meets are back for spring
Didn’t find what you were looking for?