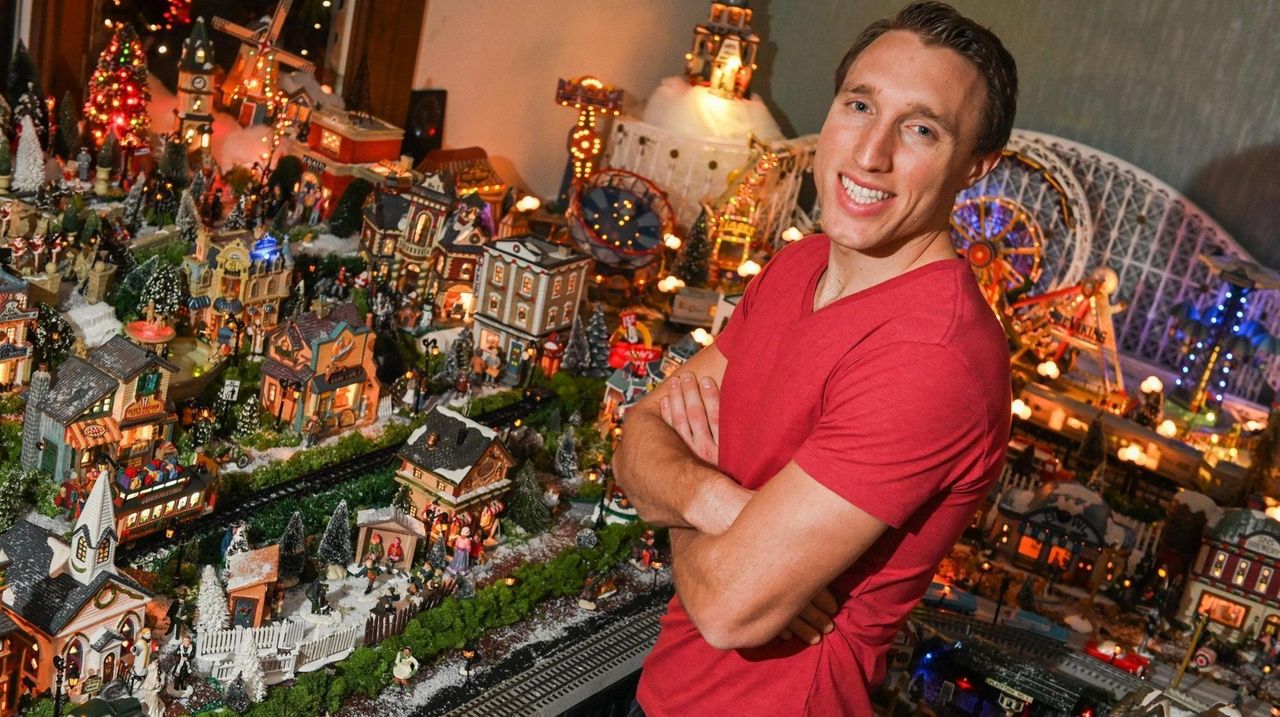 For some Long Islanders, a dream world comes to life every holiday season with their elaborate village setups. On Sunday, Nov. 17, and Saturday, Dec. 7, Farmingdale's Alex Woloshin talked about his miniature village and how he keeps it up to remain connected to his late grandfather, who inspired him. Credit: Morgan Campbell, Steve Pfost

Twinkling towns, merry ice skaters and cheerful shoppers: It’s a fantasyland Christmas few of us get to see IRL.

But for this trio of Long Islanders, the dream world comes to life every holiday season with their elaborate village setups. Their miniature burgs rival the most sprawling of suburbs, taking over tables, floors, cabinet tops and entire rooms. Their idealized towns help to connect them to precious childhood memories and keep cherished traditions alive.

Alex Woloshin’s building tradition started in childhood, with an annual visit to Fortunoff’s basement Christmas display with his grandfather. “We would get one new piece for his village that he had, which was an 8-foot-by-4-foot board,” said Woloshin, 27, who lives in Farmingdale.

Woloshin’s grandfather bought him a miniature house and train, which he arranged under the Christmas tree. “And then every single year since that time, I just kept buying more stuff and it's grown to what it is today,” Woloshin said.

What it is today: A spread that fills the entire living room of his mother and stepfather’s Farmingdale home. To put it together, “I started November 1st and I finished the day before Thanksgiving,” Woloshin said. “Eight hours every weekend, I was working all day Saturday and Sunday, and then sometimes late at night after work.” In the living room, there used to be room for a small couch, but this year, Woloshin added a new 6-foot section to the village, which meant the couch had to go — at least for the weeks the village is displayed.

“What's funny is I actually just got engaged in October,” said Woloshin, who has his own web development company. “So we started looking at houses and we keep joking because we're going to have to make sure that the house can accommodate the village.”

His village includes an amusement park with working rides. When a gear broke in his pirate ship figurine, he contacted the company for a replacement. They couldn’t help him, so he used his 3D printer to create a new gear. Now, the pirate ride swings the way it’s supposed to.

And his grandfather’s original houses have a privileged place in the town.

Peter Goodman and Becky Brooks-Goodman’s holiday tradition centers in their kitchen, but it’s not a special meal or dessert. It’s the giant Christmas village that unfolds each year across the top of their kitchen cabinets. “It has a town, houses, light-up trees, a train and Santa on a sleigh on top of ‘snow.’ It’s huge!” Brooks-Goodman wrote in an email.

“My wife and I are mixed marriage. I'm Jewish and she's Christian,” said Peter Goodman, 49, an attorney. “She's always said that one of the reasons I married her was I got a chance to celebrate Christmas, which I will neither confirm nor deny.”

Their celebrations have included creating the village every year with their son and daughter, both in their teens. “It is a labor of love,” Goodman said. “It’s a special thing I've been doing for my kids since they were little, so they look forward to it every year.”

As Brooks-Goodman, 51, an interior designer, prepped their home to be on the Sea Cliff holiday house tour this year, the village seemed like it would be too over-the-top. “Every year, it gets a little bit bigger and a little more evolved, and my wife always complains a little because it gets a little much,” Peter Goodman said.

“She originally said no Christmas village until the house tour is over,” Goodman said. “Then she caved in and she said, ‘You know what? I think the Christmas village will look awesome.’ She gave us the go-ahead and my daughter and I spent last weekend putting up the village, and we went and bought some new stuff, and it's even bigger and better than ever.”

Goodman said he has four or five vignettes spread out along 18 to 20 feet of a Dickens-themed village, all nestled in cotton, for make-believe snow. A space near the range hood turned out to be the perfect landing stage for Santa and his sleigh.

“I know that my kids are going to want me to hand down some of the pieces to them, so hopefully continue to do with their kids,” Goodman said. “It’s a way to hold onto the memory of people and places and things, and it’s a very nice tradition.”

Nina Solis of Huntington began her Christmas village collection in 1997, the year she married. Her collection predates her oldest son, Robert, 20, who was born in 1999. A house here, a building there, and pretty soon, she had a little town.

“I have a church, I have a hotel, I have a post office. I have a Yankee pub,” said Solis, 48, a legal secretary. Another son, Alex, 14, the family’s sole Mets fan, isn’t perturbed. “It doesn’t bother him. He loves it,” said Solis.

Solis’ pieces are set in cotton batting to mimic snow. “I display it at my tree, on a table, one of the big 6-foot tables,” she said. “My husband sets it up for me every year. He has his certain way of making sure everything looks fine. It kind of looks like streets, the way he does it.”

And in the streets, there’s people. “You have a little photographer taking a picture of a family outside,” said Solis, who also has a 12-year-old daughter, Gabbie. “You have a dog. You have some kids by the church.” Peek into Santa’s house, and they’re baking cookies. “I like it. It brings me peace.”

Solis gets to enjoy her village until the week after Christmas. “I just sit there and enjoy the month that we have the tree up. I usually take it down after Three Kings Day because I’m Spanish,” she said.

“It just brings peace to me. It’s very relaxing, the lights are really pretty. It looks like a miniature town,” she said.

Solis stopped collecting for a while because the pieces take up a lot of storage space. But after a Newsday photographer visited, she decided to pick up collecting again. “I told my husband, ‘I want to start up again. We’ll get another table and we’ll figure out how to store it.’”

“I love it. It looks really pretty.”

Miniature Christmas villages, made mostly of ceramic pieces, are a tradition that dates back centuries.

In “Merry Christmas! Celebrating America’s Greatest Holiday,” Karal Ann Marling traces its origins to the Moravian Church, whose followers brought the practice of building miniature landscapes known as putzes to Pennsylvania from Germany in the 18th century. Displayed around Christmas trees at churches or homes, a putz would feature religious scenes such as the Nativity or Noah’s ark, but also often incorporated little houses and other buildings. By the 1860s these could be quite elaborate, with moving parts to flour mills and mechanical dogs that barked and jumped.

The Moravian tradition inspired others to set up their own Christmas villages, and inspired stores to sell the miniatures. Collector’s Weekly writes that golden age of the “American Dimestore Christmas” took place between the world wars, when tiny cardboard houses made in Japan became a holiday sensation. They were cheap at the time, but these days vintage sets can sell for $100 or more.

Today, companies including Lemax and Department 56 sell a dizzying array of miniatures to design your dream Christmas village. There are thriftier options as well: Dollar Tree offers a set for $13.