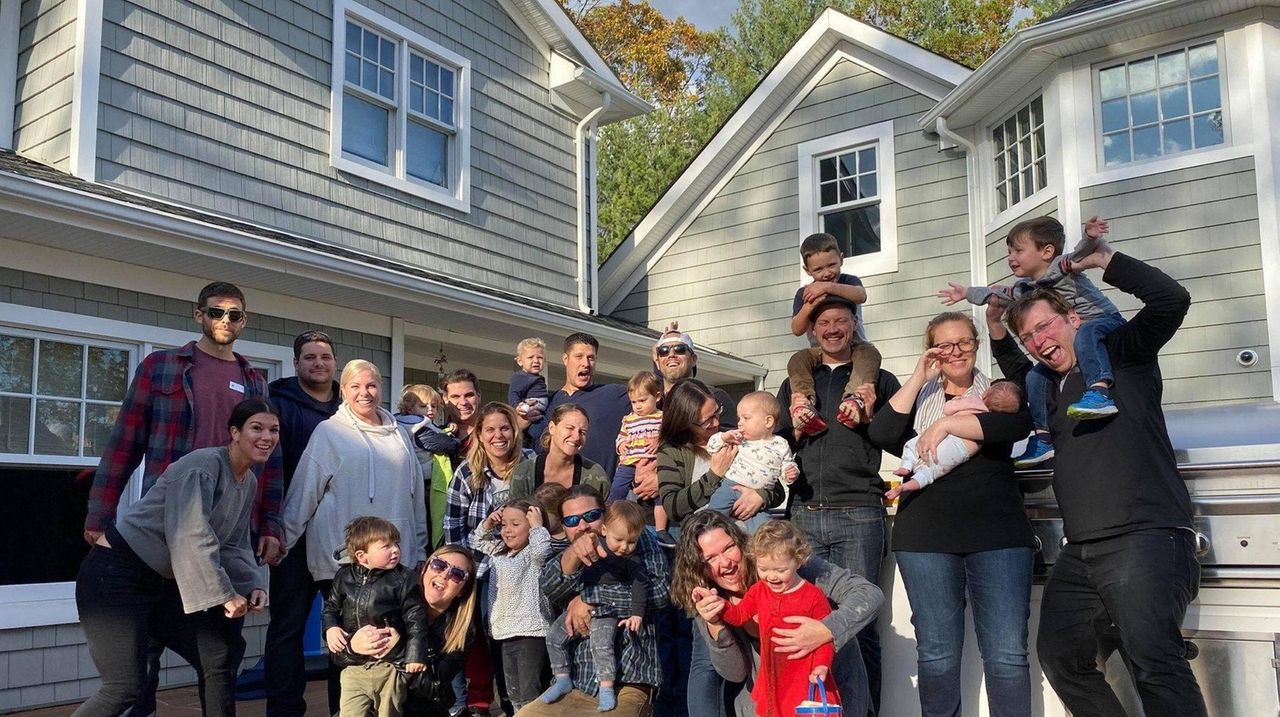 Friends all over Long Island gather to celebrate their own version of Thanksgiving called Friendsgiving. On Nov. 9, some childhood friends got together in Smithtown for Friendsgiving. Credit: Morgan Campbell

November's biggest turkey-based holiday has some competition, as friends all over Long Island gather to celebrate their own version of Thanksgiving called Friendsgiving.

"At family Thanksgiving, maybe there's a relative talking about politics, or there's some family drama," says Julee Ann Marazzito, 33, a speech therapist who lives in East Islip and attended her first Friendsgiving on Nov. 9 at her friend's house in St. James. "Friendsgiving is just friends getting together to have a good time."

A new tradition for old friends

For some Long Islanders, Friendsgiving is a welcome alternative to the more commercial aspects of the season. "I abhor Black Friday shopping," says Nicole B. Brewer, 45, a digital media specialist at a real estate agency who lives in Cutchogue with her husband and two teenage daughters and has been hosting Friendsgiving on the day after Thanksgiving for the past five years. "This way, we're just extending Thanksgiving with friends who have become family."

Others say they see it as a way to start celebrating early. "We host ours the night before Thanksgiving every year," says Ashley Behrens, 30, an assistant animal shelter director who lives with husband, Mike, and friend Allyson in Selden. "We find that even friends who don’t live locally come to our Friendsgiving, and then crash at a family member's house and go to their family Thanksgiving next day."

The tradition goes back almost a half-century in one Long Island household. "While the word 'Friendsgiving' seems to be a fairly recent thing, having a second Thanksgiving dinner with friends is something that I have done my entire life," says Anita Lalor, 50, a pharmacy technician and trainer from Farmingdale who lives with her husband, Rob, and two adult children. "My parents' closest friends celebrated their wedding anniversary in late November, and hosting them for dinner was a way of sharing the holiday with the family that they had chosen." Anita refers to her annual event as "Thanksgiving Sunday." "It's one of the few good china/crystal/silver sit-down dinners I host each year," she says.

The best thing about the day is the company, of course, but the second-best part is the food, say revelers. But lest you think it's all instant noodles and Pringles Turducken chips (yes, that's a real thing this year), these meals can get quite elaborate. Lalor spends weeks preparing a menu with her daughter, Steph, 25, and hosts as many as 18 to 30 guests. Now, she likes to focus meals on vegetable side dishes based on local produce from a co-op farm in Bethpage, adding homemade breads, ham, baked pasta and even roast beef, she says. She has, however, elected to forgo the big bird. "Everyone is sick of turkey by now," she says.

Lots of Friendsgivings skip turkey. "It used to be just Thanksgiving food, but no one really likes Thanksgiving food," says Kamryn Mogul, 27, a planning manager for Estée Lauder who lives in Massapequa Park with husband, Blake, whose circle of friends has been hosting their Friendsgiving for almost a decade. Her event, which usually brings between 15 and 18 people, is held on Dec. 7 and takes advantage of the catering packages at a local Italian restaurant. She serves chicken parmigiana, pasta and salad.

"Everyone chips in for the meal so it's actually really cheap," she says. "Last year, it cost about $15 per person." She says her dinner guests, who often stay until 2 a.m., also bring their favorite beverages, appetizers and desserts.

Brewer, whose potluck dinner consists of Thanksgiving leftovers brought by her almost 40 guests, says Friendsgiving is a great way to cut down on food waste. "We say to our friends, 'Come over and let's clean out the fridge and have a cocktail,'" she says. It also means there's a wide assortment of food. "One year we had four sides of Brussels spouts, and eight pumpkin pies that had one slice each taken out of them," she says.

Some Friendsgivings aren’t even dinners. Caitlin Holtslag, 33, a stay-at-home mother and part-time yoga instructor in Kings Park who lives with her husband and two kids, attended her first Friendsgiving — a brunch — on Nov. 3. Food was half savory and half sweet, and everyone was there from about 11 a.m. until midafternoon. "It was  a nice start to the tradition," said Holtslag. "It's important to actually see your friends face-to-face even if you're talking or texting every day." The event was attended by a core group of 16 friends, some of whom have known each other since elementary school, plus 12 children.

Not about the food

Reena Temburni, 34, an operations producer who lives in Levittown, says her annual Friendsgiving, which brings about 20 people together, is about kicking off the holidays with her favorite people. "It's about the camaraderie," she says. "It also becomes an unofficial start to the holiday season and spirit. It really gives that warm fuzzy feeling and keeps it going through the New Year."

Behrens says her Friendsgiving, which usually boasts between 40 and 50 guests, is also very budget-friendly. "Everyone brings a dish, so it’s not one person slaving over a stove all day and stressing out," she says. "And because everyone participates, and that lessens the financial burden of throwing a party." Ashley hosts and is responsible for cooking the turkey and ham every year, as well as supplying the plates, cups, and silverware. "Everyone else brings their signature dish or an item requested by us, like ice or rolls," she says. "It makes it very easy. We usually don’t spend more than $200 with everything."

What you need to know about Friendsgiving

• Bring something. The host generally cooks the main dish, and coordinates the meal. "The guests all bring a side or appetizer or drinks or dessert," says Reena Temburni. "We have a Google spreadsheet that we use to sign up and coordinate."

• Make it special. Nicole Brewer has a signature cocktail every year. "Last year, it was a bourbon cranberry sangria," she says. "This year, it's apple pie margarita." Anita Lalor says that this year she'll be serving wine she made with a friend.

• Keep it relaxed. "Thanksgiving is with your family," says Kamryn Mogul. "It's a lot more formal, and you wear a nice outfit and have conversations about work. For Friendsgiving, you can come in an ugly sweater and sweats. Some people sit on the couch and the floor and it's a lot more laid back."

• Involve the kids. Lalor says daughter, Steph, 25, loves to set a beautiful table for guests, while Brewer says all the younger kids at her event hang out in the basement and host a Wii video game tournament.

• Get some inspiration. Movie theaters will be airing two four-episode Thanksgiving collections of the classic television series "Friends" titled "Friendsgiving." Check local listings to attend one of the limited two-night screenings on Nov. 23 and 24 .

Try something new: Recent LI restaurant openings
3:29
See how vegan ice cream gets made at this LI shop
3:29
James Beard-trained chef creates must-try vegan ice cream at LI shop
LI drive-in, outdoor movie and concert schedule for summer
The dish you need at your next summer party
10 events, things to do this weekend on Long Island
Didn’t find what you were looking for?