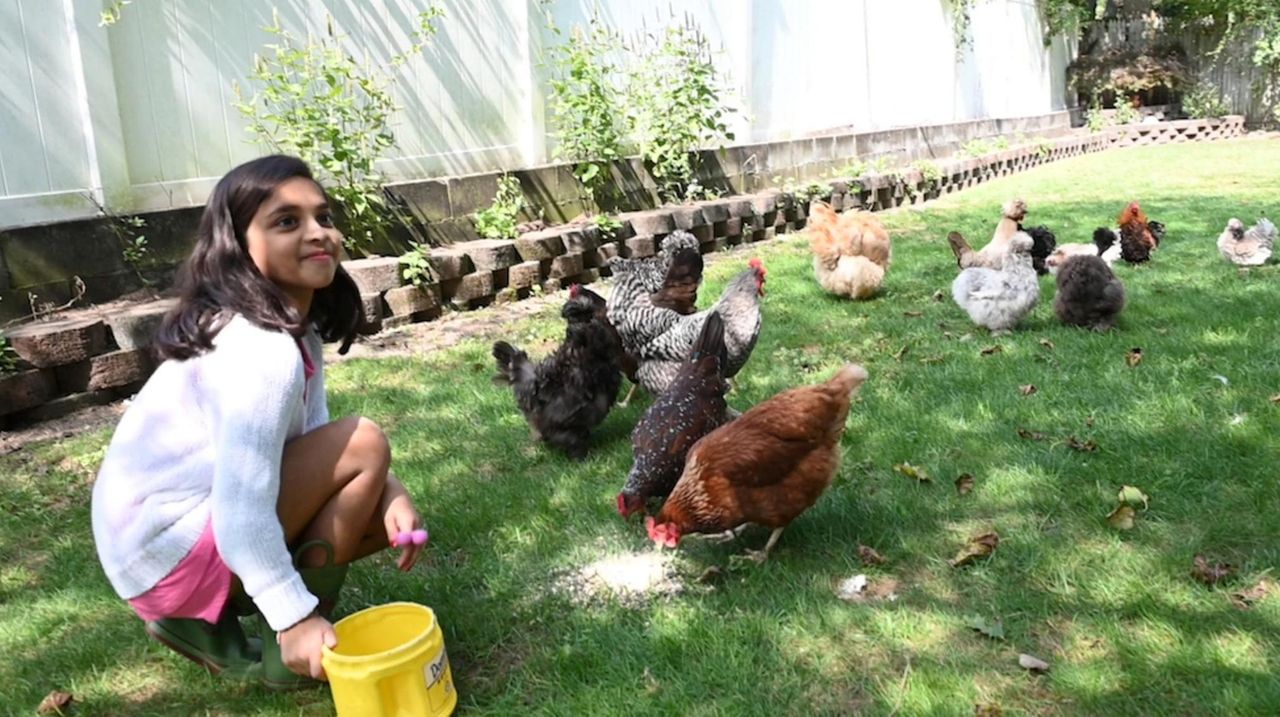 When Anna Maria Ramsuchit, 37, from Mastic, needs honey or other fresh ingredients, she heads to the Long Island Homesteading Forum, an online community of residents looking to learn more about gardening, swap products, get canning ideas or identify that thing growing in their backyard. On Sept. 14, she showed Newsday her chicken coop and more. Credit: Corey Sipkin

More specifically, the 37-year-old stay-at home mother from Mastic heads to the Long Island Homesteading Forum, an online community of residents looking to learn more about gardening, swap products, get canning ideas and try to identify that thing growing in their backyard.

“Within seconds, I can find local gardeners and get fresh, unique stuff, just by asking,” Ramsuchit says. “The group is especially great around the holidays because you can always ask for a recipe or get feedback on an ingredient and where to find it, even if it’s on short notice.”

A growing movement, homesteading is a form of self-sufficiency, with individuals striving to grow their own produce, make their own herbal remedies and essentially live off their land. Though the lifestyle is rooted in independence, the Facebook group has provided Long Island homesteaders a vibrant, supportive community, filled with knowledgeable experts and generous growers.

Like many forum members, when Ramsuchit joined the page in 2016, she says she was looking for advice. She asked the group for help on understanding why her apple tree was blooming irregularly, and was soon connected to a specialist who came to her house for a free consultation and identified exactly what the problem was. As a chicken farmer, Ramsuchit has also used the group’s expertise on caring for her flock.

“I’m very grateful to have found this group,” says Ramsuchit. “It’s filled with so much knowledge and so many interesting and unique people.”

The page was started in 2013 by Rachel Maris, 34, an East Moriches resident and passionate gardener who began homesteading after the birth of her five children.

“Homesteading is so close to people’s hearts because food fuels your body and your spirit,” says Maris. “I love sharing the things I’ve learned. I’m learning as I go and a lot of people are like that. We learn together as a community.”

Maris, an executive director at a banking consulting company, says she decided to start the Facebook group after seeing how many people were posting about gardening or topics related to homesteading on various other pages. She says her hope was to give people one central source of information where they could have their questions answered.

“People started joining so quickly,” Maris says. “I didn’t expect it to take off like it did.”

What initially started as the Suffolk County Homesteading Forum soon became the Long Island Homesteading Forum, as people from both counties as well as New York City and beyond began joining. Today, the group includes more than 4,400 members — a number that grows by roughly 25 members each week.

The topics covered by the Facebook group run the gamut from the best time to plant seeds, to tips for raising chickens, to recipe requests to plant identification. Links to educational articles are shared, as are photos of vegetable victories, fowl fails and everything in between.

The most common resource exchanged is information, as members will often pose questions such as what a particular insect is or the best method to preserve a specific fruit. Within minutes, members will chip in with an answer.

“Anytime a question rises, the first place I’ll ask is the local people on the homesteaders,” says Nick Sarin, 37, a Manorville resident who joined the Facebook group in 2014. “People have their specialties. If we have a fermenting question, we know specific people who have that information. For canning questions, you get to know the people who are expert canners.”

Bartering also is popular within the group, as members will swap extra produce for local goods or services. Sarin recently traded a beekeeping lesson in exchange for a pony ride for his daughter, and he and Maris often share produce, seeds or yogurt. Some homesteaders are also happy to give away their bounty for free, such as one member who recently invited others over to help her get rid of 20 yards of composted manure and hay. "This stuff makes awesome fertilizer for pumpkins and gardens and soil in general," the member said.

While active in the group, Maris takes a hands-off approach as an administrator, opting not to moderate comments but focus primarily on approving new members, whom she tries to limit to Long Island. And unlike other pages, which can often quickly descend into divisive vitriol and unrelated tangents, she says that the forum stays supportive, giving members a peaceful space to learn and share, as well as provide opportunities to connect outside of the screen.

“I’ve made several friends through the forum I would never have known otherwise,” says Sarin, adding that several members recently got together to assist another member who needed help cleaning out his nursery. “As self-sufficient as I want to be, humans are social creatures. We do rely on each other.”

Looking toward the future, Maris says she is hoping to grow the offline Homesteading community even further. While the group has had several gatherings — dinners, seed exchanges, gathering at a town hall to protest restrictive chicken laws — members are usually more active on Facebook than in real life.

“I want people to not just be on the internet but talk more and maybe do some volunteer things,” Maris says. “I want to get people more involved in person. That’s definitely my goal for the future, to have more of a physical meeting and community.”

The Long Island Homesteading Forum is just one of a number of local Facebook pages aimed at helping area residents get in touch with nature and where their food comes from. Here are a few more groups connecting Long Islanders with the power of their homestead.

The idea for the Long Island Gardening Group germinated in the Farmingdale garden of Jim Swatko, who says he found himself at a loss when trying to plant some soybeans. With the best source of information available being an overly descriptive 25-page manual, he says he realized the need for a forum for like-minded gardeners to be able to share information and ask questions. “I invited eight friends and little by little it started growing,” Swatko says of the group that began in 2015. “We have almost 1,800 people this year. It’s completely organically grown.” Members, comprised of individuals throughout the tristate, can post a question — such as what a particular flower is, where to buy plants, and the best way to attract butterflies — and have several responses within minutes. The page is also a great place to show off the fruits of your labor. “Gardening can be a solitary thing. Unless you’re planning on having garden parties all the time, people don’t usually see what you’re working on,” Swatko says. “It’s fun that you get to show it off without hosting a great big group of people.”

The idea for the Long Island Chicken Keepers was hatched in 2015, and since then, the group has grown to include nearly 2,100 egg enthusiasts. Among them is Amy Pross, 42, from Ronkonkoma, who owns 15 chickens. “It has been a great resource,” says Pross. “My friends on Long Island Chicken Keepers often recommend local feed stores, good veterinarians and also post about what has worked best for them in terms of cleaning, vitamins and setups.” Chicken parents — which include those who keep fowl for pets and food — ask for advice, share their expertise and trade funny anecdotes. And photos — of chicks, hens, coops and bounties of eggs — are plenty.

Try something new: Recent LI restaurant openings
LI drive-in movie, concert schedule for the summer
A princess celebrates her birthday this weekend and you're invited
3 LI restaurants to try this weekend
2:54
10 events, things to do this weekend on Long Island
1:29
Old Bethpage Restoration to host WWII Encampment June 19-20
Didn’t find what you were looking for?