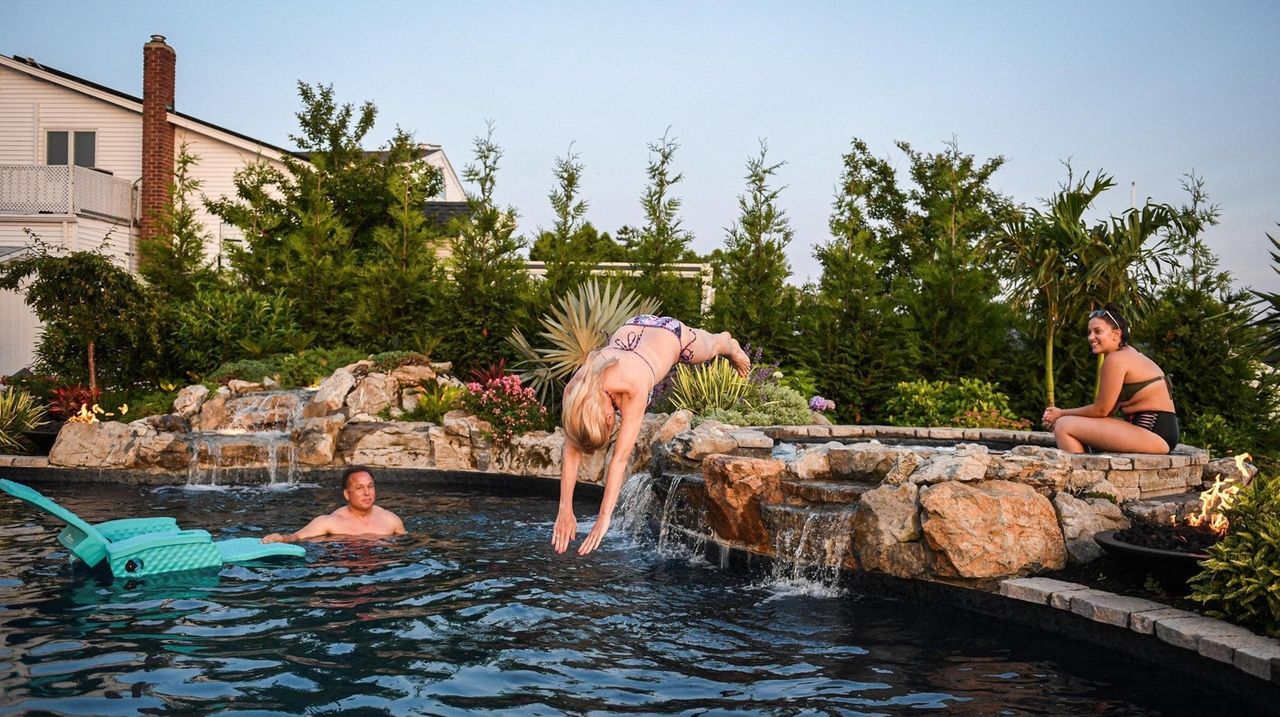 Spectacle, luxury, ease and energy saving are among the latest trends for homeowners looking to put in an inground pool or update an old one, experts say. On Saturday, June 22, the Gumpel family of Massapequa showed off what they called their "backyard oasis" — an in-ground pool with three waterfalls, two fire pits and a hot tub, all overlooking the water. Credit: Newsday / Steve Pfost

Ray Beck and his wife, Lori, decided to take the plunge 32 years ago. By adding a pool, that is.

Choosing to install one on their Baywood property was a bit of a whim at the time, but they say they considered it a good way for their young son and daughter to learn water safety and how to swim. Their in-ground model had a waterslide, and Ray, now 71, and Lori, 69, envisioned summer parties on the surrounding deck.

There were indeed parties. But years passed and the kids left. Gathering around the pool with friends became less appealing for Beck, a retired New York City police detective, after he had a scare with melanoma from sun exposure. Finally, keeping up with the chemicals, cleaning the pool and paying the tax bill became too much.

Yvonne Murphy, 50, decided to take the plunge a year ago when she bought a home in Oceanside with a semi-in-ground pool. Murphy grew up with a pool at her family residence in Coram and loved every minute of it. Their house was a neighborhood magnet for her friends. She and her siblings often spent their musical instrument practice time around the pool, then jumped in afterward. Now, at the Oceanside home, her own three daughters use the pool constantly and, just like at Yvonne’s childhood home, their friends show up, too.

“We’re serious about our pool,” says Murphy, the owner of a geriatric care management agency. “Now, I get to be in the position of my mother, where everyone comes over and has a good time and I get to watch.”

A swimming pool is a dream come true for some. For others, not so much.

“I tell people it’s kind of like getting a boat,” says Lou Russo, of RemoveYourPool.com, whose East Meadow company removes and fills in pools of those disillusioned with their watery pleasure. “The most exciting day of your life is buying a pool -- and getting rid of the pool.”

A study last year by the National Association of Realtors examining the appeal of remodeling and landscaping projects ranked having a new pool 12th out of 13 outdoor attractions. When it came to adding value to a home for resale, it came in last, at number 13. (Lawn care and landscaping were at the top.)

In the same study, less than 1 percent of Realtors suggested sellers add a pool before attempting to sell their home and only 2 percent said the project sealed the deal. Also, the value recovered from adding a pool was less than 50 percent of its price, they said.

But the study showed another side of the coin. Ninety-two percent of the consumers who put in a pool said they had a greater desire to stay at home once it was installed. And 83 percent said they were happier sticking around the ol’ homestead.

There is no denying that for some people having a swimming pool is a fantasy come true, says Greg Darvin, owner of Pristine Pools in East Hampton, which specializes in high-end projects. “It’s a symbol of success and something they’ve dreamed about all their lives,” he says.

Throw in a diving board, a Jacuzzi, an outdoor kitchen with a grill, maybe a slide for the kids or an extended shelf where the adults can sip drinks while undulating in the water, and it’s the good life come true.

Yes, pools come with chores, but consider this, Darvin says. A backyard pool is private. You don’t have to drive to the beach, and the overall cost is more palatable if it replaces a gym membership.

“Some people get in a workout before they have their morning coffee,” he says.

That was sort of what Fran Burke, a director of a community residential rehab agency in Suffolk County, had in mind when he put in his pool 15 years ago at his Port Jefferson home. He says he figured it would become a focal point for his two children. What he didn’t count on was that they would join the high school swim team, requiring them to spend six days a week training.

“The last thing they wanted to do when they got home was jump into a 20-by-40-foot yard pool,” he says.

He and his wife, Linda, used it occasionally, but the children moved away and eventually the pool deteriorated to the point it would have cost $20,000 to fix up, he says. If he did, it would be back to square one with the upkeep.

This was when he contacted Lou Russo, who has been deconstructing swimming pools on Long Island for 18 years. Russo says he removes 50 to 80 a year, mostly for people whose pools have languished for years and would be quite costly to repair. Most pool-removal jobs cost around $10,000, and a town permit may be required, he says.

“Sometimes I take out pools that are perfectly fine,’’ he says. “People are just done with the maintenance.”

Parting is sweet sorrow for some pool owners. One couple in Lynbrook had a dilapidated pool but didn’t want to take it down. So, they kept it and put in goldfish to keep down the mosquitoes, Russo says. It didn’t work, and they finally conceded it had to be removed. His crew lowered the water level, scooped up the goldfish in buckets and gave them away to people with ponds.

That isn’t going to happen to Phil Trugman, a Plainview man who has had a pool for 34 years. For him, the pool life is the only life. His family grills all summer by the water. They have parties, they watch television outdoors. Recently, he held a bridal party for his daughter in the backyard.

“Basically, we’re out here every weekend from Friday to Sunday,” says Trugman, 65, a retired sales manager. “Everyone comes over. It’s like a resort out here.”

Yes, there are expenses, he says. Also, danger. But he taught his son and daughter to swim at a young age and makes sure adult supervisors are on watch whenever friends bring over their children. Also, his pool alarm alerts him if anyone tries to sneak in at night. It’s all good.

Yvonne Murphy doesn’t disagree. “We love everything about it,” she says. “We’ve got the pool, the BBQ grill, the water. It’s a beautiful life.”

THE COSTS OF OWNING A POOL

The bottom line for the cost of a swimming pool is there is no bottom line. Above or semi-above-ground versions can mean an outlay of a few thousand dollars up to something in the teens. In-ground types can run hundreds of thousands of dollars. Add waterfalls, fountains, Jacuzzis and multicolored fiber optic lighting and you’re talking hedge fund money.

“Costs are all over the place, depending on what you want,” says George Kazdin, president of Kazdin Pools & Spas in Southampton.

Here are some ballpark figures for pool upkeep tallied by talking to several Long Island retailers:

MAINTENANCE Generally, this means chemicals such as chlorine, pool “shock,” test kits for pH and alkalinity and water conditioner. Do it yourself and the bill can range between $300 to $400 for the season. Having the pool serviced can cost $50 to $150 an hour on a weekly basis.

SAFETY CONCERNS New York State requires pools be enclosed by a fence at least 4 feet high with childproof gates and an alarm system. For an average-sized yard, this can cost between $3,000 and $7,000, depending on whether the fence is chain link or plastic. Also, be aware that pool contractors must have some knowledge of engineering, plumbing, landscaping and electrical work, so check if they have a license from the county consumer affairs department.

INSURANCE AND TAXES An average-sized pool is covered as an “other structure” in most instances, insurance agents say, but an extravagant pool could add $200 to $300 annually to a policy. As far as property taxes, owners with above-ground pools may not be affected since they are not considered as adding value to a home. But in-ground pool owners likely will see a jump. How much varies from town to town. In Huntington, for example, putting in a 20-by-40-foot pool would increase property taxes by about $1,300 a year, according to a town spokesman.

THE TOTAL As far as the initial cost of the pool, fences, alarms, etc., it all depends on your dreams and pocketbook. As far as maintaining one in good working condition, pool retailers generally agree it runs between $3,000 to $5,000 for the season.

Visit the Cradle of Aviation Museum, more things to do this weekend on LI
Didn’t find what you were looking for?