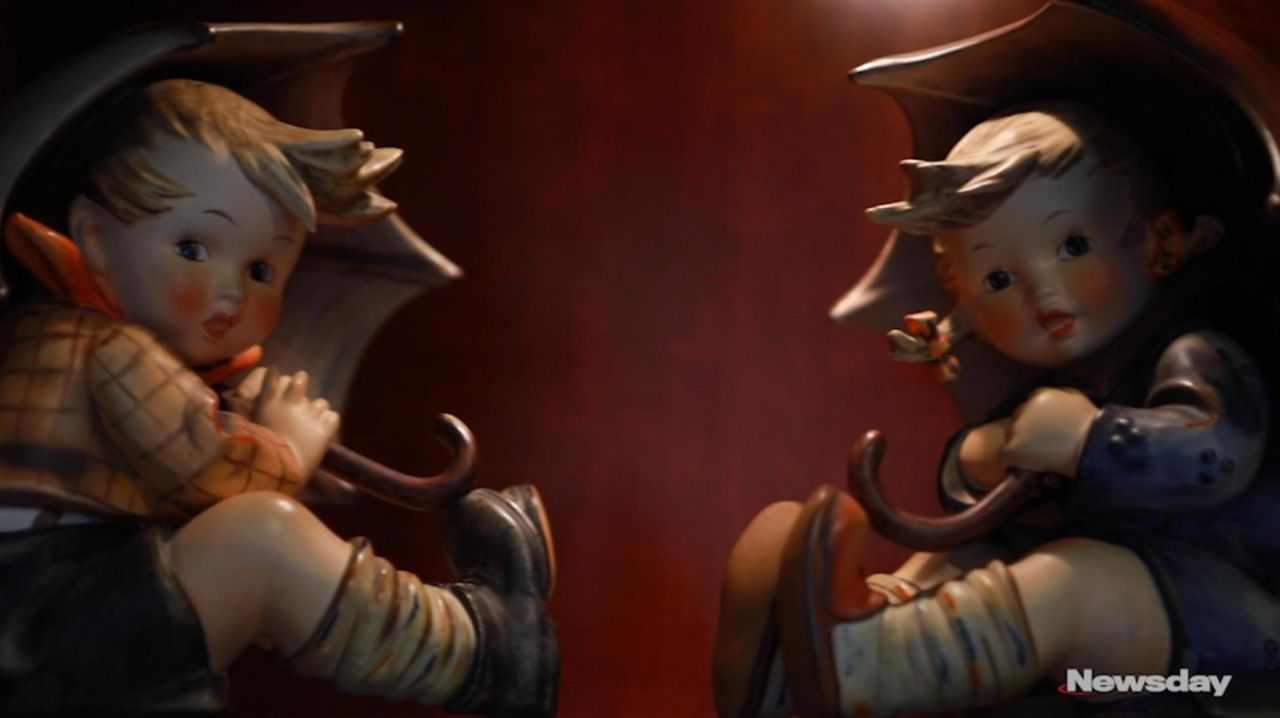 Maria Ciringione Deegan of Huntington shared the Hummel collection left by her mother and took Newsday along on Thursday as she got the ceramic pieces appraised by Funk & Swagger Antiques in Huntington. Credit: Newsday / Shelby Knowles

Midcentury Modern ceramics manufactured after World War II and through the 1970s have been strong for years with no end in sight, says Michael Hubert, 51, owner of Funk & Swagger, a Huntington antique shop. Larger or more intricate pieces of any period always command a good price, even if the market is filled with the more common items of the same company, he says.

“In the end, if it attracts your eye, there is a good chance that there is someone else who feels the same way,” says Hubert, who has appeared on HGTV’s “Flea Market Flip” and National Geographic Channel’s “Flea Man” cable TV shows.

Hubert says that the market value of an item comes from its scarcity related to demand, condition and size. “Making sure it isn’t a fake is important when buying or selling as well,” he says. All Goebel Hummels, for instance, are inscribed with the name “M I Hummel” unless the work is too small to hold the insignia, he says. “Fakes can sometimes have a dull sheen or a white over-glaze that was not original to the piece,” he adds. “The safest thing is to familiarize yourself with the trademarks, model numbers, etc. Through the years, some Hummels have been released with variations in their design, so researching your piece is worth investing the time or asking an expert.”

Long Islanders wanted to know what their vintage treasures might be worth in this market. Here’s what Hubert had to say about each piece.

Huntington Station resident Erica Zimmerman, 37, a freelance hairstylist, used this Florence Ceramics 1940s-era mermaid as her wedding cake topper. Such a piece is “super hard to find,” says Zimmerman, who purchased the 4½-inch-long piece in 2012 for about $60 on eBay.

THE APPRAISAL Florence Ceramics was founded in the early 1940s in Pasadena, California, says Hubert. Founder Florence Ward started the company as a hobby and turned it into a successful business, focusing her talent on detail and accuracy in the execution of each piece, he says. “That kind of passion and technique went into all of the items that were offered, from candle holders to boxes, but the most popular items were figurines,” Hubert says.

Deborah Santaito Lovaglio, 54, a Glenwood Landing real estate agent, says her husband, Joe, got these “Lady and the Tramp” figures from his mother, who got them from a friend who collected figurines.

THE APPRAISAL The Disney set is from occupied Japan, circa 1945-1952, and was made for American export, Hubert says.

Aimee Fitzpatrick Martin, 56, of Hampton Bays says that when she was a girl, her mother gave her a ceramic figurine depicting a girl praying. “I’ve always treasured it, and it’s traveled with me through all my moves, from Long Island to Boston to Albuquerque to Connecticut and back to Long Island,” says Martin, a real estate broker.

THE APPRAISAL The F & W Goebel company was founded in 1871 to make marbles and slates but started making porcelain products soon after. William Goebel owned the entire company by 1893 and its main focus was porcelain. Franz Goebel began production of the Hummel figurines in 1935. “They were an instant hit,” says Hubert. “There is still a collector’s market for the rosy-cheeked children but the modestly priced smaller figurines are what you mostly find.”

“My father used to surprise my mom in the early years of their marriage with these Hummels,” says Huntington physical therapy firm owner Maria Ciringione Deegan, 52, of her figurines. The pieces, purchased in New York, were given to mark events such as the birth of her siblings, Deegan says.

THE APPRAISAL Franz Goebel of the German porcelain company came upon the artwork of Sister Maria Innocentia Hummel and acquired the rights to turn her pastoral scenes of children into figurines, beginning production in 1935, says Hubert. “Soldiers were big buyers of them, sending examples home as gifts, and their popularity is still strong, though the market has slowed in recent years,” he says. Deegan has “some good ones,” says Hubert.

Lisa Freedman’s father, Edwin J. Freedman, was an attorney and village justice in her family’s hometown of Freeport. He was given this mug as a gift, either in the late 1950s or early 1960s, says Freedman, 63, who now lives in Shelter Island Heights and owns a public relations firm. “It has been cherished in my family ever since,” says Freedman. “I inherited it with his estate, and continue to cherish it because I see my father in the expression on the face of it.”

THE APPRAISAL Established in 1815 by John Doulton, the Royal Doulton company began with practical utilitarian items such as stoneware drain pipes and then branched out in the 1840s to include an assortment of household wares, says Hubert. The company’s novel character jugs started production in 1934 and lent themselves to tobacco jars, ashtrays, teapots, even music boxes, he says. The popularity of these jugs allowed the company to explore more than 600 different characters, he adds. With so many out there and with such a long production life, it’s best to research such mugs well, Hubert says. “The range can be from a few dollars for common ones to a few thousand dollars for the more exceptional and rare ones,” he says.

This vintage ceramic piece was displayed in Gary Lewi’s mother’s home in North Merrick for decades. The bottom says it was made in “Occupied Japan,” says Lewi, 66, who lives in Syosset and is a media relations executive. “I have never seen another example of artwork inscribed that way,” he says. “I held onto it after she died as a keepsake and memory — and then I turned it over.”

THE APPRAISAL These two items were hand-painted and made between 1945 and 1952, says Hubert. “They are most likely of a bisque material and were made for tourist export,” he says. “The market is not particularly strong for collecting this item at the moment, but it will always be a wonderful family memory.”

"Make the value secondary and enjoy the piece without having anxiety over the price," he says. "If you feel you will always see a number in front of the item, let it go."

But if you do purchase a ceramic piece as an investment, make sure the condition is excellent (no chips, cracks, repairs) and that you are purchasing under market value (do your research), he says. "If you have a gut feeling about the piece, pull the trigger," he adds. "Even if you make a mistake, it’s always a good learning experience and you will most likely still admire the piece and keep it in your private collection."

Valerie Kellogg, a Huntington resident, is an editor at Newsday.