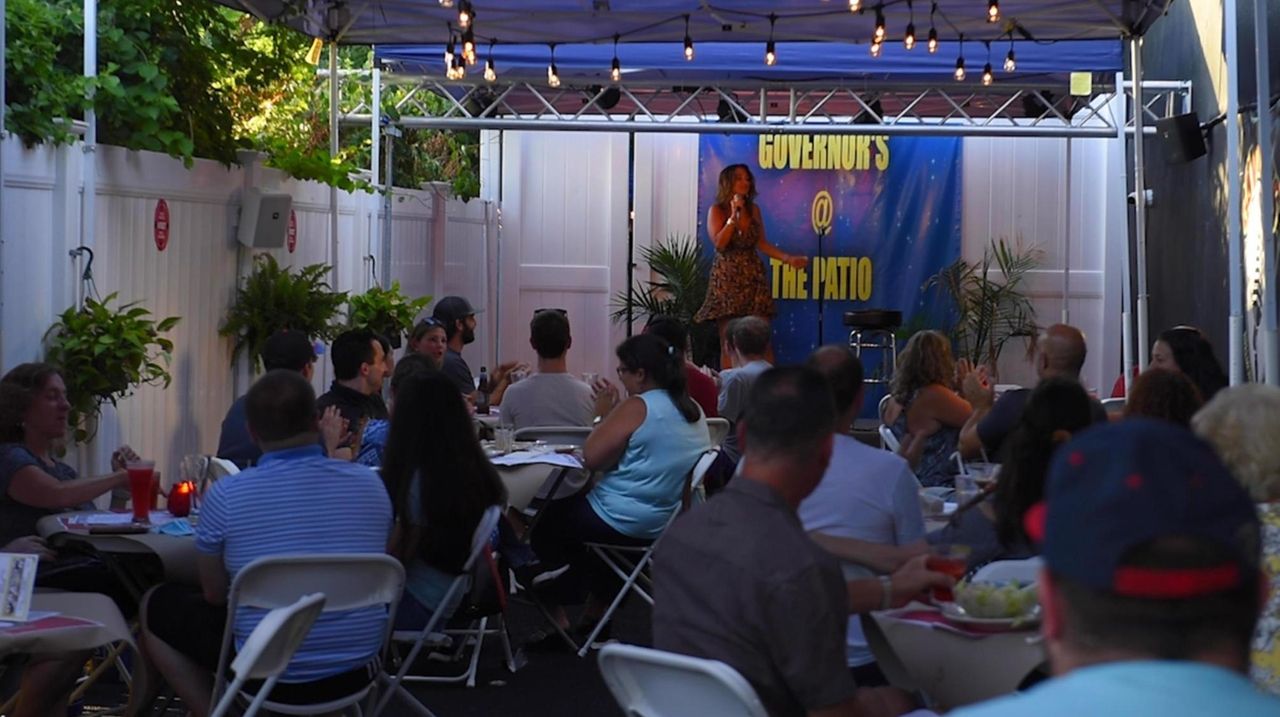 Governor's Comedy Club in Levittown has opened an outdoor patio, with about 20 tables that are socially distanced. Many safety precautions were made due to the pandemic including food served with covers and a germ-killing blue surgical lighting at the entrance. Credit: Johnny Milano

Coronavirus hasn’t conquered comedy at Governor’s in Levittown. The legendary comedy club recently opened a new outdoor venue, Governor’s @ The Patio to accommodate its customers during the pandemic.

“I put together an outside area on the side of the building,” says owner James Dolce. “I tented the top, blacktopped the floor, put up fencing, plus added a stage with lighting and amplification. The sound is clear, you would think you are inside.”

The area is 15 feet wide x 145 feet long holding 80 people at 20 tables of four. Safety is taken seriously as everyone is expected to wear masks until they are seated.

“We stagger the tables to keep the 6 foot distancing in place,” says Dolce. “All our staff wears masks and gloves, each menu is dated so it’s freshly new and every dish is served room service style with a cover.”

The first comedian to christen the stage was Joey Kola of Bellmore, who traditionally opens all of Governor’s clubs.

“I couldn’t wait to get back,” says Kola, who jumped on stage wearing a mask and sprayed the mic with Lysol. “When you get on a roll, there’s nothing like seeing people double over with laughter. You just don’t get that on Zoom.”

“I’m not really open to performing inside right now,” she says. “There’s not a lot of clubs doing this. But, I felt safe at the Patio. I wouldn’t have done it if I didn’t.”

Olga Namer was happy to be at an actual club as she has been performing at public places in Manhattan.

“I’ve been doing shows in Central Park without a microphone,” says Namer. “You really have to pro-JECT!”

Host Michele Fox of Melville takes the stage on a recent night at the Patio to warm up the crowd but she avoids any COVID  or political humor.

“I try to stay away from things that are controversial and have negative connotations,” she says. “If the crowd wants to hear that, they can turn on the news.”

Richard Gluck of New Hyde Park treated his wife Clare, his son Richard Jr. and his son’s girlfriend to an evening of comedy.

“We like this concept and needed a couple of laughs,” says Gluck, 53.

Clare, 51, added, “It’s a nice break to see live entertainment for a change.”

Comedian Mike Keegan of East Meadow came on stage with high energy and a big smile.

“I joined Planet Fitness for $10 a month so I never feel obligated to go,” says Keegan. “I like to go on the first Monday of every month, which is pizza night! The membership only costs $10 a month, I eat $30 worth of pizza so I’m making $20. It’s awesome.”

Theresa Minieri of North Bellmore and her husband Tom were just happy to be out of the house.

“No kids tonight! We are free for the weekend,” says Theresa, 60. “It’s nice to be outside in a new setting doing comedy a different way.”

Comic Tom Kelly grabbed the mic with excitement as this was his first show back.

“This is my corona avatar people,” he says. “I went into corona looking like Dawson from ‘Dawson’s Creek’ and came out looking like Doc from ‘Back to the Future.’ ”

Some people in the crowd said the live comedy took some pressure off everyday life.

“You release endorphins when you laugh. It’s a great healer,” says Kola. “When I can relieve an audience of stress by making them laugh, there’s no greater reward.”

RODIA ON THE RISE

Anthony Rodia is blowing up. The 39 year-old comedian from Franklin Square saw his social media followers triple during quarantine and now he’s selling out multiple shows at The Patio.

“Just to be out and doing shows is a bonus. It’s better than staying home,” says Rodia, who just released his Quarantine Comedy special filmed with no audience. “My goal is to always try to be funnier than I was yesterday.”

According to Governor’s owner James Dolce, Rodia is becoming one of the club’s hottest comics today.