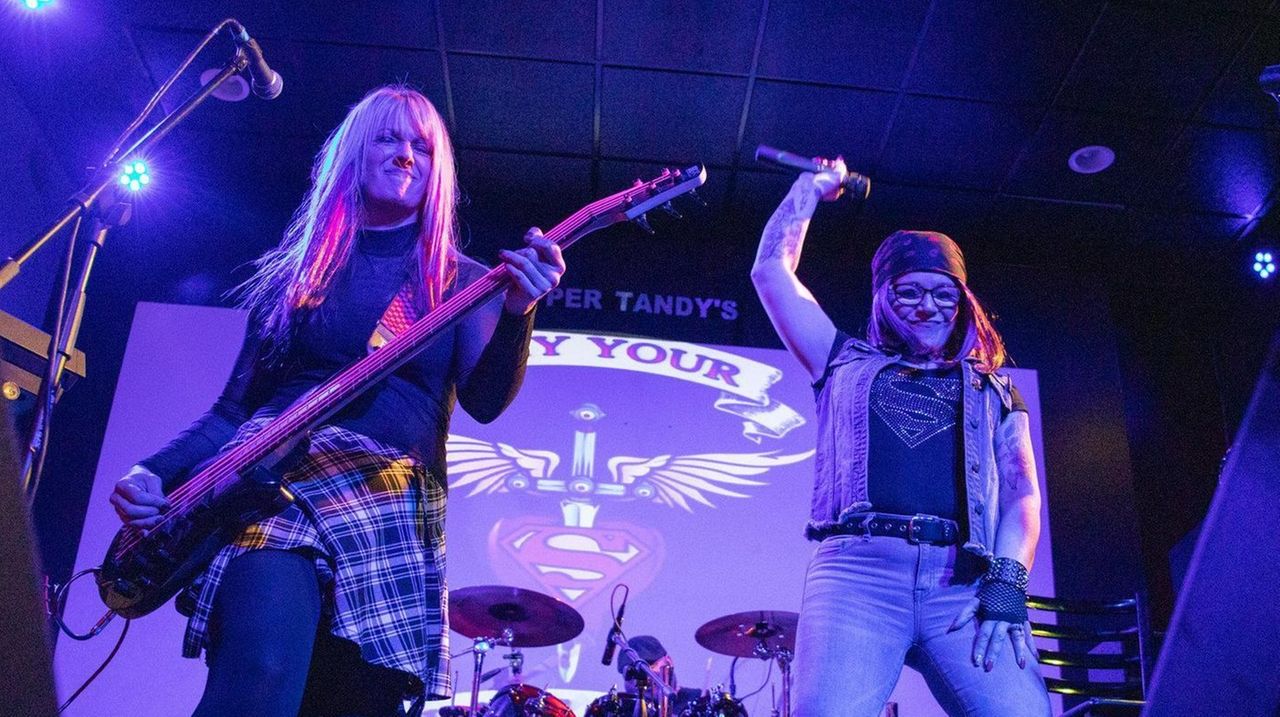 Pat Benatar, Joan Jett, Amy Schumer and Rosie O’Donnell are some of the Long Island women who have conquered the stage in music and comedy, respectively. They helped pave the path for local female comedians and rockers who are making their way through predominantly male-dominated fields. These ladies will be coming to a venue in Nassau or Suffolk near you.

"I believe comedians are the messengers of our society," says Locke, 45. "They tell you what's really going on and put a funny spin on it so it's more palatable to take."

Currently, she sees opportunities opening up for women.

“There used to be an unwritten rule that you only have one female on a bill. Now, I do a show called ‘That’s What She Said’ where there are five female comedians and we sell out,” says Locke. “Things have really opened up for us.” She is expected to play upcoming gigs at McGuire’s Comedy Club (1627 Smithtown Ave., Bohemia) on March 20 and 21.

“Women can rock just as hard as guys. Maybe even harder,” says Rose, 37, of Mastic Beach. “When a female pulls off these male-oriented songs, it adds a new dimension because it’s more interesting. Female rock singers are becoming more accepted now. I hope to see more women out there.” She has an upcoming gig set for March 21, at Junction (20 W. Park Ave., Long Beach).

Karavas is an in-your-face comic who tells it like it is and doesn’t hold back any punches.

“It’s so much harder being a female. Comedy is such a boys' club,” says Karavas, 54, who grew up in Bethpage. “Now, the tables have turned. Women have something to say. It’s time to pass the baton.”

In her new comedy special, "Men, Flaws and Menopause," it's clear just how much she loves the stage. "Making someone laugh is a euphoric feeling because you are bringing people joy," says Karavas. "It’s definitely a natural drug.” Her upcoming March 27 gig at Argyle Theatre (34 W. Main St., Babylon) has been postponed (new date to be announced).

Jett signed this female power trio to her own label Blackheart Records and opened up for Cheap Trick, Murphy's Law and Chad Smith of the Red Hot Chili Peppers.

“We’re rock-n-roll with a punk attitude — picture Black Sabbath meets Rancid with women,” says singer/guitarist Annie Stoic, of Babylon. “We are excited to be out on tour making roadway for other ladies. But, there’s a long way to go.”

The band will release its first full-length album, “Chronicles of Jane,” later this year. Currently, their new single "Drama King" is making waves. They're expected to play an upcoming gig at Long Island Puppet Theater (10 Heitz Place, Hicksville) on March 28.

Those aged 20 to 40 may know O’Brien from her hit podcast, “Be Here For A While,” and she’ll make her Long Island debut with a hybrid show including her friend Kristen Doute of “Vanderpump Rules.”

“I’m combining 20 minutes of stand-up followed by an interactive live podcast,” says O’Brien, 34. "We will bring one of the VIP ticket holders up and have them tell a funny dating story then play 'Never Have I Ever.' "

O'Brien is addicted to stand-up and is fully enjoying her moment in the spotlight.

“There’s something about that instant gratification and connection. It’s very much a rush. The entire experience is the thrill of 'this could go horribly or wonderfully,' ” she says. “I think this is a great time for female comics. At certain points, I’ve gotten more opportunities for being a girl.” O’Brien has a March 28 gig set for The Brokerage Comedy Club (2797 Merrick Rd., Bellmore).

Dressed in her signature gown, this veteran comedian will deliver a well-crafted set of her nonpolitical jokes.

“Female comedians are all very distinctive,” says Rudner, 66. “For example, I would never be able to say the same jokes as Amy Schumer. Every one of us is very unique.”

Rudner makes a point to stay away from blue material.

“It’s more comfortable for me and comes naturally,” she says. “The more honest I am with myself, the more the audience believes it.” Rudner's March 28 show at Patchogue Theatre (71 E. Main St., Patchogue) has been postponed (new date to be announced).

LAY YOUR HANDS ON ME

“This is a band of grounded, educated musicians who are also friends outside of music,” says guitarist Heather Faulkner, 43, of Shoreham. “We are all moms who work. It’s all about time management and keeping everything on a schedule.”

Lead singer Michele Miller, 42, of Lindenhurst recently recovered from a bout with breast cancer which included four months of chemotherapy and a double mastectomy causing the band to pause performing for a year.

“My band and my kids were a huge support system,” says Miller. "Not being able to be out there gigging makes me antsy. I want to be in front of a crowd with people singing, dancing and smiling."

This five-piece female cover band focuses strictly on the hits of women artists ranging from Blondie to The Pretenders to The Bangles to The Go-Go’s to The Cranberries.

“We wanted to do something not everybody was doing,” says lead singer Michele Meech, 44, of Suffolk County. "On stage we all dress in a theme and do our best to engage the crowd by being as entertaining as we can."

But, the collective goal of the band is to shine a light on the music of legendary female rockers.

“It’s really inspirational when a woman totally owns the stage,” says Meech. “We want to share our love of their music with the public who might not be aware of how powerful these female artists are.” The band is slated to come to 89 North Music Venue (89 N. Ocean Ave., Patchogue) on June 26.

LI drive-in, outdoor movie and concert schedule for summer
2:02
Rockaway Beach has much to offer summer daytrippers
2:44
10 events, things to do this weekend on Long Island
2:44
Eternal Con returns and more: Here's what's happening on LI this weekend
3 places to try over-the-top fries this weekend
A big pop culture convention is coming to Hofstra this weekend
Didn’t find what you were looking for?