Khalid Gallant’s love of dance came through some persuading.

In 2011, during his sophomore year of high school, Gallant was in the hallway of Uniondale High School when the head of the school’s show choir sought his help. The choir director, Lynette Carr-Hicks, was short a body for a dance routine. Despite his disinclination, she believed Gallant would be a good fit for the nationally ranked Rhythm of the Knight Uniondale Show Choir.

“I was like, I don’t dance. I don’t want to dance,” says Gallant of his reluctance to perform with the group that acts, sings and dances competitively. “But she just threw me in there.”

Gallant learned a few steps and enjoyed it. In no time, he came to love performing and joined the troupe. 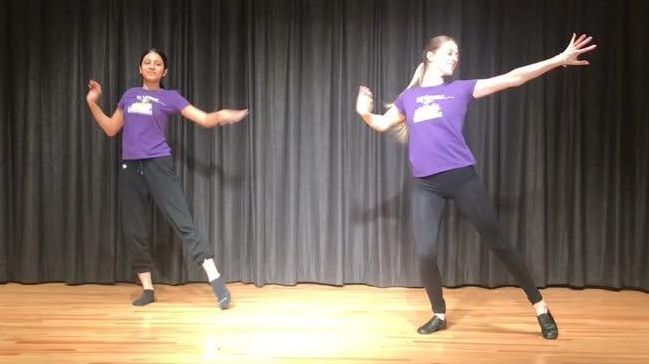 “If it wasn’t for that day that I happened to be in the hallway doing homework and she grabbed me up, I don’t know if I would have found the passion that I have for dancing and entertaining in general,” says Gallant, now 22.

That passion inspired him to launch KG Group Entertainment at age 19 to provide a creative outlet for other youngsters. The 10-member dance and vocal group consists mostly of Uniondale-area students who range in age from 9 to 24 and two other alums from the Rhythm of the Knight choir and band.

KG Group Entertainment performs across Long Island at churches, talent showcases, fundraisers and local libraries voluntarily and for pay throughout the year. This month is among their busiest, because they participate in several Black History Month celebrations.

It’s not uncommon for performers from the Rhythm of the Knight show choir to graduate to Broadway or other major stages. Gallant, who is majoring in forensic psychology and minoring in computer science at John Jay College of Criminal Justice in Manhattan, has become a mainstay locally. His group performs at venues including the Uniondale Public Library’s annual talent show and the Cradle of Aviation’s Festival of Trees.

KG Group Entertainment practices every Tuesday and Thursday. In the week preceding a performance, the group rehearses every night.

Gallant’s mother, Lorraine Gallant, says her involvement with the group has gained her 10 additional children. As the appointed “momager,” she secures their gigs, donates her living room as a rehearsal space and helps shuttle group members to and from practices and performances.

At their Black History Month interactive programs, the group’s youngest member, Aaliyah Dupree, will sing Louis Armstrong’s “What a Wonderful World” while the remainder of the troupe dances behind her on stage. The program will also feature poetry from Kayla Sessoms, a student at Long Island Lutheran Middle and High School in Brookville.

“Words are really powerful,” says Sessoms, 15, a Hempstead resident who has been writing poetry since age 11. “I feel honored to be able to express myself through this group.”

KG Group Entertainment has provided a creative outlet where there was none before for students like Sessoms and Joshua Boucicaut, a tenor saxophonist and former show choir band member.

Boucicaut, 20, of Hempstead, began playing the saxophone at age 7 at the encouragement of his mother, a Kenny G fan. Boucicaut spends 20 to 24 hours a week practicing. He has been able to continue his passion while enrolled in Hofstra University through his involvement in the entertainment group. He will perform the jazz standard “Afternoon in Paris” at this month’s scheduled performances.

Gallant says he finds fulfillment in providing young talents the opportunity to start performing at a younger age than he did and teaching them the discipline that excelling in the arts demands. The importance of discipline — and the joy of performing — were his biggest take-aways from his participation in the Rhythm of the Knight Show Choir family.

“After I graduated, I was no longer able to be a part of that, but I developed a new family,” Gallant says. “An extended family.”

ADMISSION All shows are free to attend.