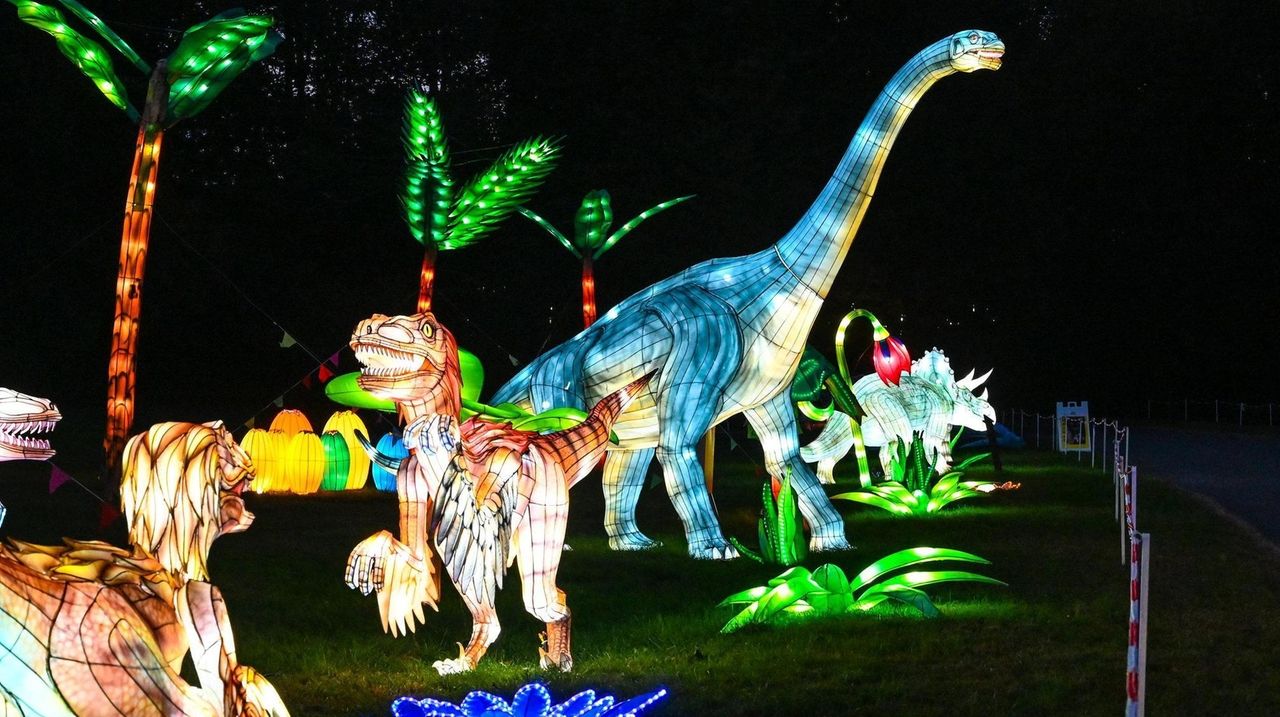 "A Bug's Night: A Drive-Thru Adventure," makes its way to the Nassau County Museum of Art in Roslyn. The themed lantern festival began Friday and runs through Jan. 9. Credit: Newsday / Thomas A. Ferrara

Imagine your car is a beetle crawling through the jungle during "A Bug’s Night: A Drive-Thru Adventure," a themed lantern festival happening at the Nassau County Museum of Art in Roslyn for the first time Friday through Jan. 9.

Pass tropical, colorful, larger-than-life flowers, glowing lizards and enormous dinosaurs while rolling through the exhibit; gawk at pandas and a tiger and a crocodile. "You are tiny and everything else is big," says Sarah Jordan, marketing assistant for the New York City Winter Lantern Festival. Cars will also pass through a light tunnel with video projection lighting that will reflect off the trees.

The lanterns aren’t like those a person would carry around at a campground. Instead, elaborate sculptures are handmade in China, and artists come over from China to assemble them, Jordan says. Steel frames are covered with colorful silk fabric; LED lighting is placed inside the displays to illuminate them.

"It just goes on forever," says Charles Riley, museum director. "It's epic. It's an illuminated fantasy. I love to see that this is a celebration of Chinese culture."

‘GIFT FOR OUR EYES’

The event is an expansion of the walk-thru New York City Winter Lantern Festival launched in 2018 at Snug Harbor Cultural Center and Botanical Garden on Staten Island by Haokun Liu, who was then a 25-year-old recent sports business graduate of New York University. While he was studying in Manhattan, Liu noticed other types of holiday light festivals happening in November and December and wanted to bring the Chinese lantern festival to New York City as well.

In China, the lantern festival is a celebration in February or March, shortly after the Lunar New Year. Houses are decorated with colorful lanterns and the holiday’s hope is for reconciliation, peace and forgiveness for the coming year.

Lui, now 28, says he thought bringing the Chinese tradition to New York during the holiday season here could give families something happy to experience together. "I made a decision to bring the traditional handmade lanterns from China to New York City because I thought people would love it," he says, and he was right. Over the past few years, the event has drawn 150,000 visitors, he says. "They say, ‘Your lanterns are a beautiful gift for our eyes,’ " Liu says.

It was a challenge to get venues on board the first year, he says. "I was a young international student. Nobody really trusted me," he says. And nobody really knew what a lantern festival was, he says; he had to explain it.

But the first festival drew so many people that it was brought back in 2019. The pandemic canceled the plan for 2020, but this year the festival is back in Staten Island, and has been expanded as a walking event in Queens and the drive-thru here on Long Island, Liu says.

The museum was eager to bring the festival to the museum grounds, Riley says. "This is one great way to bring thousands of families to this beautiful 145-acre property. This goes with the idea of bringing life to the museum and its grounds, more excitement, more inspiration."

Coming out of 2020, many people still want to social distance, Jordan says. The drive-thru lets them take in the event from the comfort of their cars; the exhibit makes a loop on the museum grounds. Visitors must purchase timed entry tickets in advance; event is only canceled if there is heavy rain, Jordan says. "A little bit of rain actually makes the lanterns really pretty, because the light reflects off the water," she says.

A Bug’s Night: A Drive-Thru Adventure

INFO Book a time and date slot in advance only at nycwinterlanternfestival.com