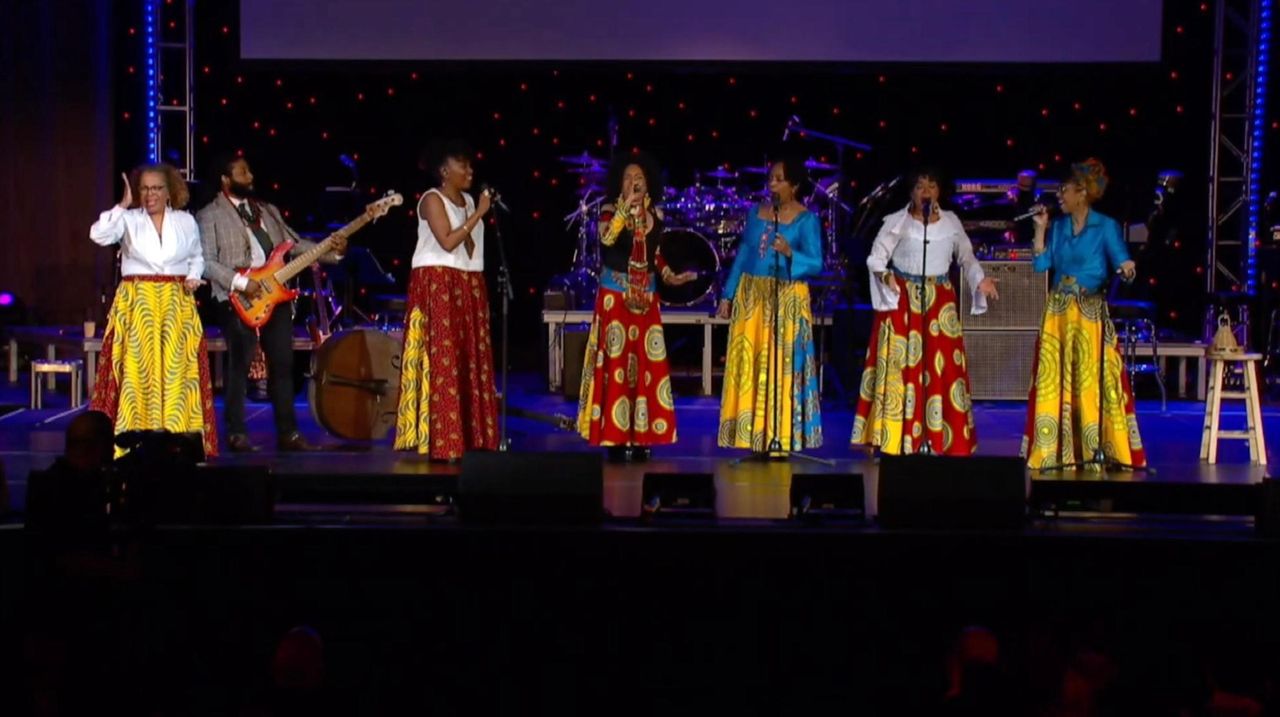 It might be the dead of winter with live shows still shut down, but that won’t stop a soulful music celebration for Dr. Martin Luther King Jr. Landmark on Main Street — Jeanne Rimsky Theater in Port Washington will present two virtual concerts from female African-American a cappella group Sweet Honey in the Rock on Jan. 17 at 3 and 8 p.m.

"Our goal is to preserve and utilize music from the African-American experience — bebop, jazz, gospel, rap and R&B," says vocalist/founding member Carol Maillard. "We empower, entertain and inspire people to be positively active in whatever way they want to uplift the planet."

This six-piece vocal ensemble began in 1973 when it was spawned out of the D.C. Black Repertory Company in Washington, D.C. Since that time, the group has toured annually across the globe.

"We’ve been all over the place experiencing all kinds of musical cultures," says Maillard. "We have been to every continent except Antarctica and we are working on that one."

Their 100-song repertoire is a blend of originals ("Ella’s Song," "I’m Gon’ Stand," "Give Love") and covers (Marvin Gaye’s "Mercy, Mercy Me," Stevie Wonder’s "Love’s in Need of Love Today," the Isley Brothers’ "Harvest for the World").

"We aim to be as expressive, present and contemporary as we can," says Maillard. "We deal with whatever’s on the table politically and socially at the moment."

The name of the group is directly reflective to the identity of its members.

"The name ‘Sweet Honey in the Rock’ represents the energy of Black women," says Maillard. "We have to be strong on the outside but there’s so much sweetness in us."

The strength of the group lies within its six singers plus bassist Romeir Mendez and sign language interpreter Barbara Hunt. "Each person brings in various flavors," says Maillard.

The Dr. Martin Luther King Jr. Celebration will be shot at the Lincoln Theatre in Washington, D.C., a legendary venue that has featured icons like Duke Ellington, Billie Holiday, Louis Armstrong and Ella Fitzgerald on its stage.

"This is a legacy moment. It’s an honor and a privilege to play there," says Maillard. "Our MLK Celebration will pull people back together during these trying times. The loving and fighting spirit of Dr. King will be addressed. We want people to leave uplifted and inspired."

"Although there won’t be a live audience in front of us, we will be able to see some viewers, who order the MLK Day Concert Bundle, through four large monitors on the stage," says Maillard. "The concept is really amazing because we can reach people all over the world, which is beyond awesome."

Sweet Honey in the Rock last performed on Juneteenth (June 19) as a benefit for the Equal Justice Initiative, which also took place at the Lincoln Theatre.

"We are keen on presenting a loving vibe," says Maillard. "Music is a self-expression in terms of your joy, grief, sorrow and expectations. All that you might be needing you can find in our songs."

SWEET HONEY IN THE ROCK

ADMISSION $15 per show (extra $5 to watch on-demand for one week), $50 MLK Day Concert Bundle (both day and evening concerts plus a virtual meet & greet with the group)