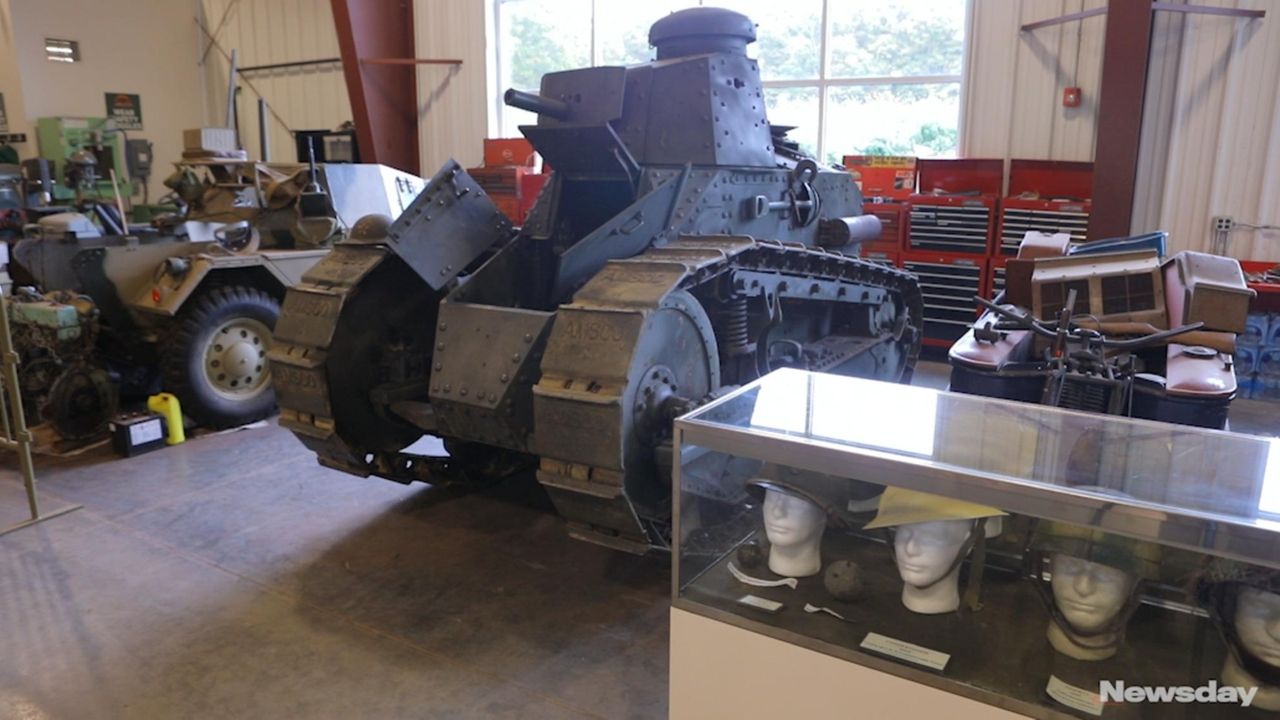 The Museum of American Armor in Old Bethpage is celebrating 100 years of tank technology on Veterans Day with an exhibit of World War I, World War II and contemporary tanks. A 100-year-old M1917 tank on loan from the Collings Foundation of Stow, Massachusetts, will be on display. Credit: Newsday / Jeffrey Basinger

Sing a rousing chorus of “Over There” because the tanks and the Yanks are coming to the Museum of American Armor in Old Bethpage on Veterans Day, with a 100-year old M1917 WWI relic leading the way.

To commemorate the 100th anniversary of the U.S. entry into World War I in 1917, a 100-year-old M1917 tank will lead a parade of three other tanks and a WWII artillery tractor at the museum on the grounds of the Old Bethpage Village Restoration.

On Saturday the tanks will be driven through the museum’s camouflaged doors, then run in formation in an adjacent field. They’ll be driven by museum volunteers, many of whom are veterans of recent military conflicts.

“People lived or died in these vehicles,” says Renton, a trained mechanic who fixes vehicles from the museum’s tank collection and will be driving one of them in the Veterans Day parade.

Many of the spectators are expected to wear their campaign hats and bring their families to see the display of military might. “The grandkids are becoming aware of the fact that they are living with heroes in their family,” Lewi says. In the event of rain or other inclement weather, the vehicles will be driven around inside the museum building.

Here are tanks scheduled to be in the lineup.

The 6-ton M1917 was the United States’ first mass-produced tank. It was built by Americans from a French design, according to the Collings Foundation. It’s considered the forerunner of every successful tank that followed for the next 100 years, according to the Museum of American Armor.

The M1917’s angular armor was intended to deflect small-arms fire and artillery shrapnel. It was equipped with a single 37 mm machine gun and a turret with a hatch at the top.

The M48 was named after Gen. George S. Patton, commander of the U.S. Third Army in WWII. It “was a Cold War tank mostly associated with Vietnam,” Renton said. The museum’s example served with the Israeli Defense Forces and fought during the 1973 Yom Kippur War along the Suez Canal. A version of this tank was used in Vietnam and would also have been found in Europe during the Cold War, according to Lewi. “It is the largest tank in the collection, and was a main battle tank that the army depended on for decades,” Lewi says.

Renton says the museum’s tank is equipped with an automatic transmission and power steering. “It drives beautifully,” he says.

One of the most recognizable tanks in history, the M4 Sherman is the kind of tank featured in the Brad Pitt WWII movie “Fury” (2014). The U.S. built more than 50,000 of what became one of the most dependable and rugged tanks of World War II, Lewi says.

The Stuart reconnaissance tank was used in the Pacific, often by Marine units during World War II. In Europe it was deployed as an armored scout to spot the enemy and then report back so reinforcements could be brought to the front.

“It had a light 37 mm gun, and while it was outclassed, literally, from the beginning of the war, it was used in Pacific Island campaigns,” Lewi says. “And also used by the British in North Africa, against Rommel.”

A Century of Tank Technology