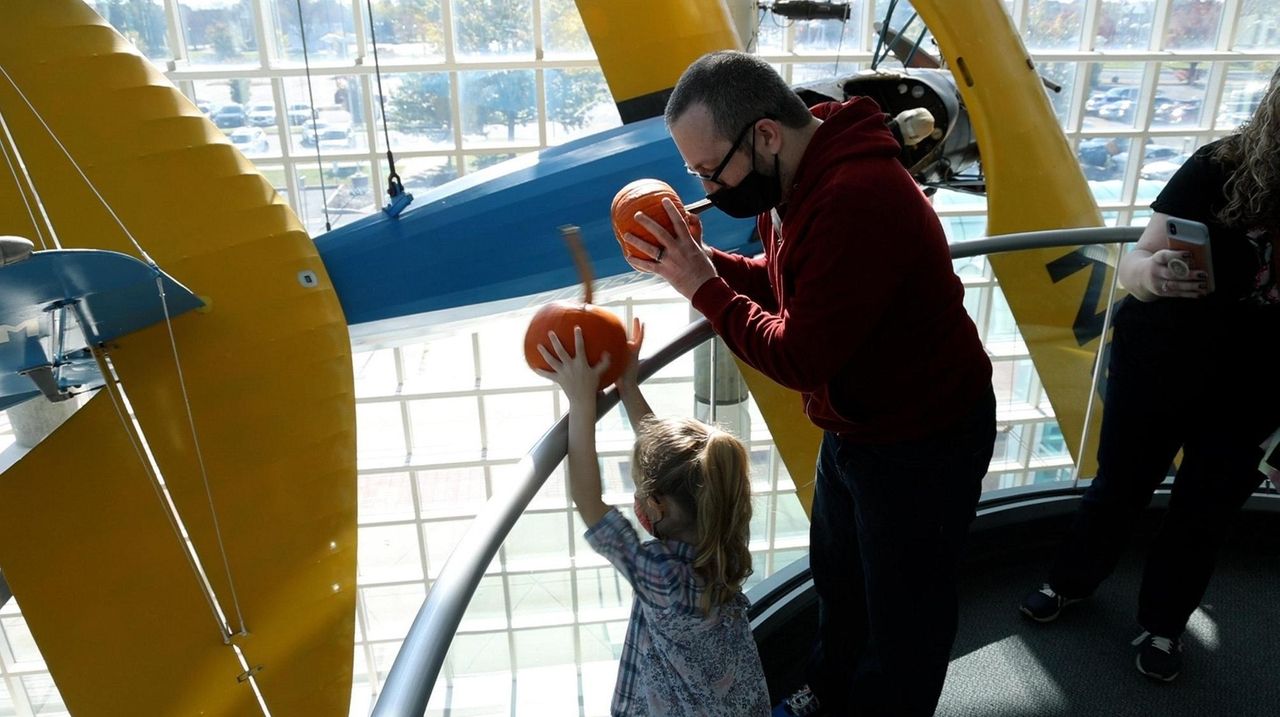 After missing a year because of the pandemic, the Cradle of Aviation Museum once again hosted its annual "Pumpkin Drop" on Saturday. Newsday's Faith Jessie reports. Credit: Newsday / Howard Schnapp

Once Halloween is over, pumpkins are out. However, the Cradle of Aviation Museum in Garden City has a solution. On Nov. 6, Long Islanders can bring their unwanted jack o’lanterns to the 10th annual Pumpkin Drop, where pumpkins are not carved but rather crushed.

"This is everyone's favorite fall activity here. We drum up some excitement around rotting pumpkins everyone is trying to get rid of," says education director Catherine Gonzalez. "It’s an epic ending to the Halloween season."

The event, which runs 11 a.m. to 2 p.m., involves one family (up to five people) at a time enjoying their collective toss from the second level, approximately 20-feet up, to the first floor.

"Every family gets a five-second blastoff countdown," says Gonzalez. "The amount of speed and the height from which they are dropping their pumpkins play into scientific principles. We do tell them to toss each pumpkin high and far out so it picks up some speed on the way down. You can even target a little bull's-eye."

The big draw is experiencing the smash as the pumpkins free fall to the floor and explode.

"People love the big splat at the end. It makes a nice thud depending on the size of the pumpkin," says Gonzalez. "The kids love to watch their pumpkins end up on the floor with the pieces all over the place. Sometimes, they don’t quite smash the way you want. If they are still intact, we let them bring them up for a second try so they can really get that splatter."

The end result is … a big orange mess.

"We tarp the entire floor and gift shop," says Gonzalez. "Pumpkin guts tend to spew all over the place so we section it off and we have a cleaning crew on the side that comes in between pumpkins. The splatter can go as far as 4-feet out."

"People can take video, pictures and hashtag themselves on social media," says Gonzalez. "They can even get shots on the splatter map before we clean it up."

If you don’t have a pumpkin, the museum will provide you with one for $2 (while supplies last) or bring your old one, even if it’s rotting. The event serves as a way to lure in visitors to the museum while offering a way to discard their old pumpkins.

"Very often, the families have built their jack o’lantern together and now they get to watch it disappear," says Gonzalez. "It’s a good feeling kind of activity that’s lighthearted. We want people to have a fun morning and then enjoy their visit to the museum."

WHEN| WHERE 11 a.m.-2 p.m., Nov. 6, The Cradle of Aviation Museum and Education Center, Charles Lindbergh Blvd in Garden City