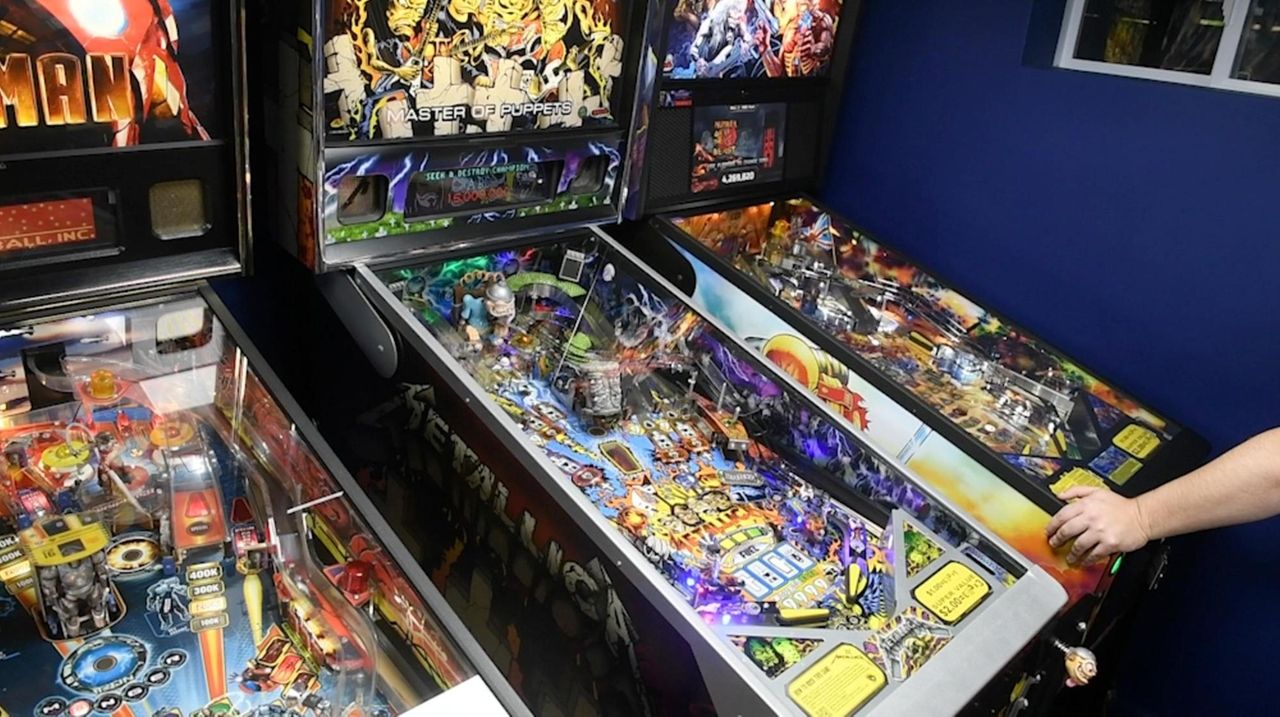 On July 24, Suffolk County's Dennis Cole spoke about his longtime love for pinball machines, of which he has a plethora in his basement. Cole spoke about the resurgence of the game and his plans to loan some of his machines to the LI Retro Gaming Expo tournament at the Cradle of Aviation Museum in Garden City the weekend of Aug. 10. Credit: Newsday / Steve Pfost

Many competitions have gone on involving football, baseball and basketball, but consider — pinball. The classic arcade game will be celebrated at the 5th annual Long Island Retro Gaming Expo at the Cradle of Aviation in Garden City on August 10-11.

“Pinball was something I always wanted to have as part of the expo since it’s such a big part of retro gaming,” says Joel Albino, co-founder of the event, which also features more than 60 video arcade games, 100 home gaming consoles and 40 role-playing games. “They are big, heavy, complicated machines that are not easy to come by. But we needed the right person to spearhead it.”

“Right now pinball is making a resurgence,” says Cole, 51, who is overseeing the new pinball branch of the expo. “We are all looking for our childhood because we want to go back in time. Plus, there are more younger people getting into the game.”

Devotees know the object of the game is to score as many points as possible once the metallic ball is launched from a side cannon. Two flippers are all you have control over. Each game has its own theme and set of obstacles.

“Pinball is all about timing and reflexes,” says Cole, who competes in tournaments and attends pinball conventions quarterly. “There’s a very small percentage of luck involved. It’s more skill.”

This weekend's expo features a free play area in an airplane hangar with 18 pinball machines, which are open for all attendees to use.

Things will get competitive when players go to battle in the inaugural Long Island Pinball Open on Saturday at 10:30 a.m. Forty players will be divided into groups of four at 10 machines in a match-play-style tournament.

“There will be newer games like Star Wars, Guardians of the Galaxy, Iron Maiden and Deadpool. Plus, older machines with more bells, whistles and chimes from the '70s,” says tournament director Greg Poverelli, who is ranked among the best pinball players in the world. “The top 8 players face off in the finals to play for a pinball machine. I think this should draw some excitement. We want to make this an annual event.”

There will be other divisions for women and children. Those entered ($60 fee) receive a tournament T-shirt, plus there are cash prizes and trophies for runners-up.

Pinball machines can range in value from $500 to $20,000. Cole owns 30 machines, which fill his basement, family room and garage in his home. But he doesn’t buy them new. “I mostly buy broken ones and fix them,” says Cole. “It’s like restoring an antique car.”

Cole gets charitable with the game through Project Pinball, a nonprofit organization based in Florida, which places pinball machines in children’s hospitals. He recently donated one to Stony Brook University Hospital’s cancer ward and regularly maintains it.

“I’ve been blessed so I like to give back,” says Cole, who donated the pinball machine going to the Open winner.

The good news is pinball is not just this year’s special feature. The LI Retro Gaming Expo wants it to be a regular part of its annual repertoire.

“We are looking to bring a pinball presence to Long Island,” says Albino. “We plan on building this pinball element to be bigger and better every year. I mean … who doesn’t like playing pinball?"