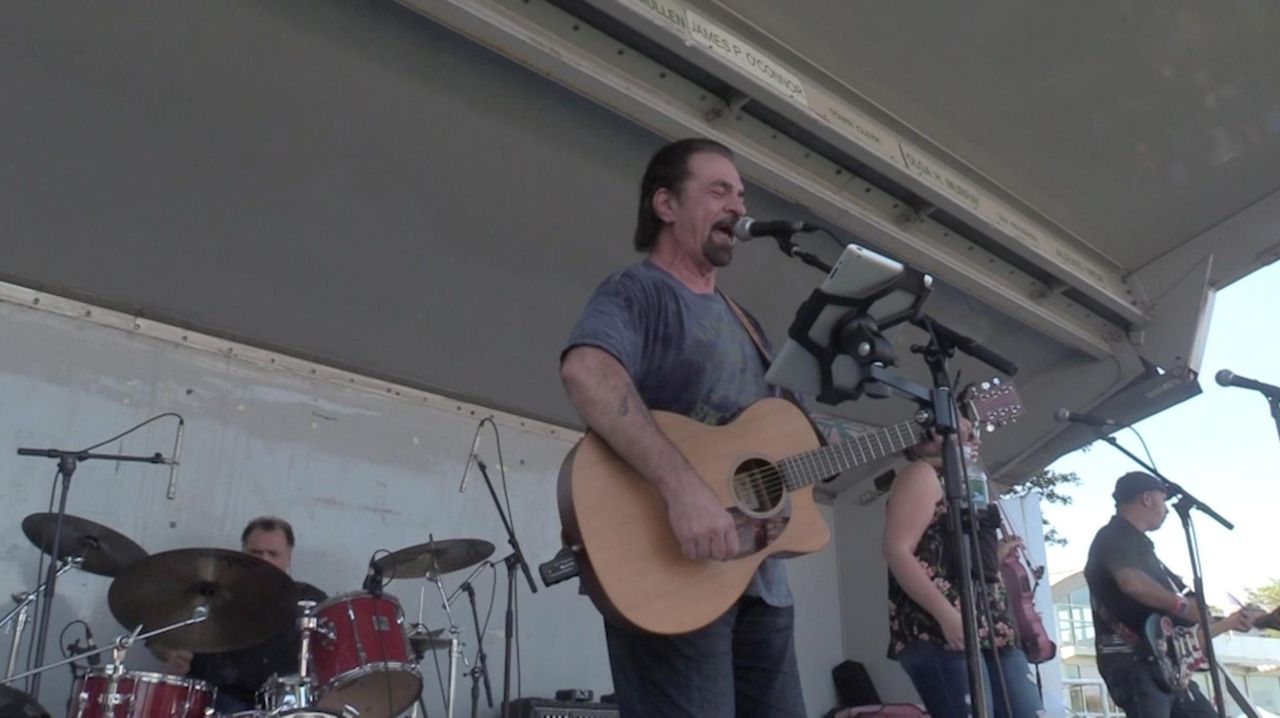 Joe Spena founded country rock band SixGun almost 40 years ago. On Nov. 16 they will perform their last concert at the Long Island Country Music Association's monthly dance. Spena launched the band in 1980, naming it SixGun during an early meeting because there were six band members. Credit: James Carbone

That’s how long it took to sell the 200 tickets for the final Nov. 16 concert of the Long Island country rock band SixGun.

The Long Island Country Music Association had planned to sell tickets during both its monthly September and October dances at the Sons of Italy Hall in Deer Park. But at the September dance, “We had a line out the door waiting to buy tickets,” says Jim Teeple, association president. “We really didn’t expect them to sell out instantly.”

Bandleader Joe Spena is retiring, and taking the SixGun name with him.

One bout with throat cancer, two grandchildren and three hernias made Spena, 66, of Middle Island, decide it was time to stop leading a six-piece band with guitar players, bass player, fiddle player, keyboard player and drummer, he says during an interview at the Suffolk Palace Diner in Centereach on a recent afternoon. “I would much rather go out with people saying, ‘We love your music. Don’t [retire],’” Spena says. “I’d rather be remembered that way.”

The band’s dissolution is a loss to the local country western scene, fans and fellow musicians say. “The country music scene today, you’re missing that old-time country music. A lot of it is mixed with disco, mixed with rap,” says Robert Buffolino of Lindenhurst, who is part of the country duo UnWined. “To get that solid storytelling, old country is just a great feeling. They have a good soul to them, a good country soul.”

Spena, the lead singer and guitarist, launched the band in 1980, naming it SixGun during an early meeting because there were six band members. “He’s had the band ever since I’ve been alive,” says Spena’s only child, Wesley, who is now 39 and a building inspector for the town of Brookhaven. “I remember coming downstairs when the guys were rehearsing in my feetie pajamas.”

At the beginning, the band played a lot of Eagles and Alabama. “That whole southern rock sound was what was becoming country,” Spena says. They also performed original songs, the majority of which Spena wrote.

Some SixGun highlights: The group won third place in a battle of the bands competition in Nashville in the 1980s, competing with about 1,600 bands by writing and performing an original song that had to do with Seagrams 7. What was the song called? “Oh gosh,” Spena takes a minute to remember that the band’s then guitar player Tony Noto wrote. “Forever You’re Mine.” Its chorus: “We go together like 7 and 7, angels and heaven, country music and Tennessee.”

The band opened for Charlie Daniels at Westbury Music Fair several times; it opened for Alabama at an outdoor concert in Connecticut with 35,000 people. The group performed in the Olympic Stadium in Helsinki during an international rodeo that brought worldwide rodeo and country stars to Finland. “It was quite a hoopla,” Spena says. SixGun opened for shows at the Lone Star Café in Manhattan in the venue’s heyday, and the group performed every Friday night for 10 years from about 2000 to 2010 at the defunct Matty T’s in Deer Park, Spena says.

The band has recorded six albums, even though it was never signed by a label. “It’s been a long run, a good run,” Spena says. “The whole thing is bittersweet.”

A HARLEY, A CONDO AND GRANDKIDS

Spena made the decision to retire about a year ago, he says. A number of factors contributed to the choice, he says, kicked off by his bout with throat cancer in 2015.

“I was a smoker on and off my whole life. I had throat cancer on the back of my tongue and lymph nodes,” Spena says. He had 35 radiation treatments. “I couldn’t swallow. I lost 67 pounds. I had a feeding tube.” The day he was declared cured in December 2015, he added his fifth tattoo to his body in gratitude. A cross saying “Never Give Up” was added to his left forearm; it joined tattoos of a musical eighth note and a tattoo of SixGun. “Once you have cancer you look at things a little differently. I think I want to enjoy myself more, which is how I came to this whole decision.”

He also had his third hernia operation in December 2018. “I think I’m pretty much done moving speakers and amplifiers,” he says. And doing the bookings and the contracts and all the other behind-the-scenes work has become too demanding, he says. “If I went back to playing, it would be a solo or duo instead of a six-piece band. It would be a varied type of music, not just country, because I really do appreciate all different types of music.”

When Spena started SixGun, he was a company director of loss prevention. But along the way, after his son graduated from college, Spena became a chorus teacher at Selden Middle School in the Middle Country School District, where he’s been for 18 years. “I teach at the school I went to,” he says, leading the sixth and eighth grade chorus, pop choir and after-school chorus. “I took a major hit in salary to do it. I consider myself to be a really lucky guy because I get paid to do what I love to do during the day and at night.”

He's been divorced once and is now legally separated. He owns a condo in Myrtle Beach, South Carolina, and hopes to eventually spend eight months a year here and four months there. He rides a Harley-Davidson motorcycle, and his son has had two children — Cassie, 3, and James, 11 months — in the past four years. “I think that he’s opening that next chapter in his life, which is probably going to be about his grandkids and some time for himself, relaxing and traveling,” son Wesley says.

The band wound down this summer, Spena says, doing only about a dozen gigs in July and August, when normally they would do 18 or 20. “I am totally, totally upset,” says Carol Ruggiero, 77, of Commack, who has taught dancing for and been a fan of the band for more than 25 years. “I’m going to miss them tremendously. So will a lot of other people.”

Spena specifically planned for their final performance to be at the Long Island Country Music Association dance because SixGun played the LICMA’s inaugural dance in 1985. “They’ve been very good to us,” Spena says.

The feeling is mutual, according to Teeple. “The bands have been a big part of keeping country music alive on Long Island,” he says. SixGun is so great because they play great dance music and they vary the rhythm of their sets to keep it interesting, he says. Others agree. “We always had dancers in front of the stage, on the grass, enjoying their music,” says Kay Manley, music coordinator for the West Islip Country Fair, where SixGun performed for decades. Ironically, Spena says in all these years, he’s never participated in the line dancing. “I never have,” he says, laughing.

Not all the band members are ready for a breakup. “I’m one of the originals with Joe, so obviously I don’t feel very good about it,” says Ed Jennings, 64, of Smithtown, the band’s bass player for all but two years when he had to take off due to work demands. “I wanted to continue on, so I’m not happy about it at all. For him, he feels it’s time to end. I don’t. I’m probably the most sad. It’s kind of like a shock to me.”

Jennings says he plans to look for another established band to join. A few of the other band members say they may organize to form a new band. The members won’t continue as SixGun. “Joe is the leader of the band,” Jenning says. “He formed the band, he incorporated the band. SixGun is Joe. He’s the original member. It wouldn’t be right to take the name and do it without him.”

"The Devil Went Down to Georgia" by The Charlie Daniels Band

"Beg, Steal or Borrow," a SixGun original written by Spena (“It’s a story song about two people who meet right after World War II. They lose their son to Vietnam, she develops Alzheimer’s, but they’re still together,” Spena says.)