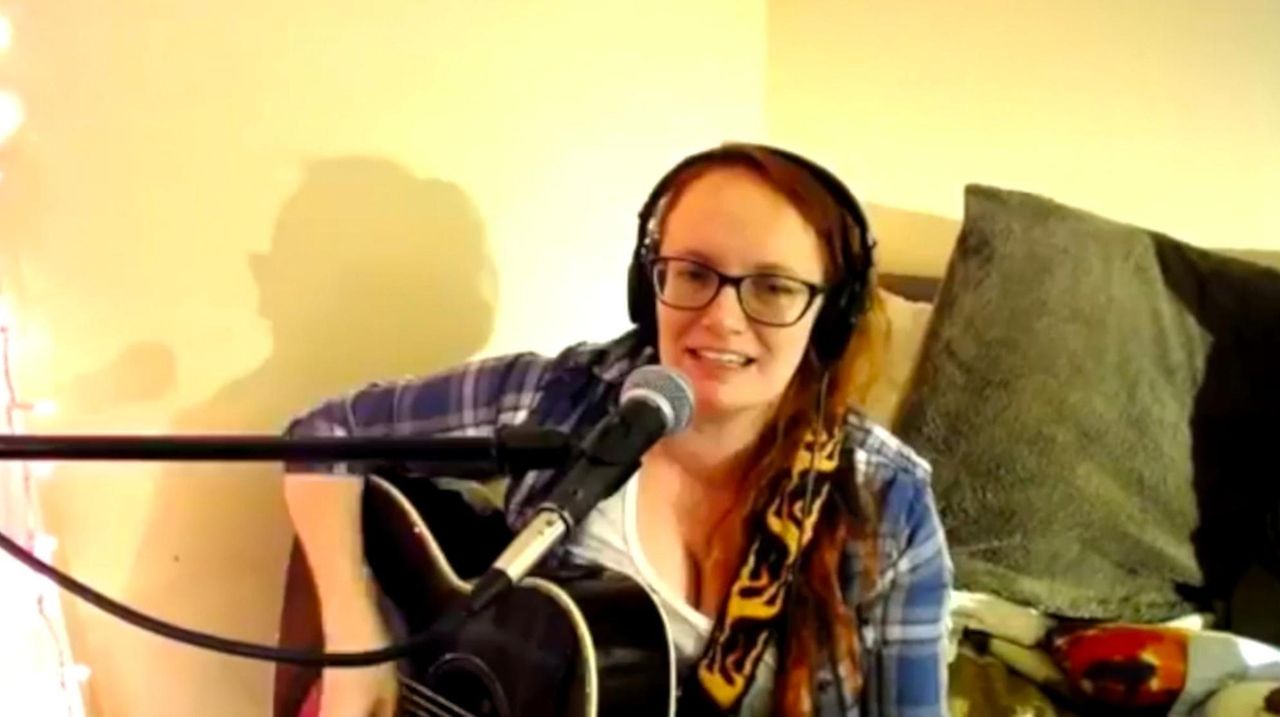 Rorie Kelly, a musician from Sound Beach, performs in her home now that her gigs at bars and restaurants have been canceled due to the coronavirus. She spoke to Newsday about how she is making ends meet.  Credit: Alex Pinheiro

Without Long Island venues as their stages, these millennial performers are keeping the flame alive by holding livestream concerts from their homes. Here are five rising female singer/songwriters to check out.

The indie singer/songwriter is used to playing four to six gigs per week, and in early March, she had dates booked all the way to October. But since the coronavirus hit, everything has frozen. “My income literally disappeared overnight,” says Kelly, 35, of Sound Beach. However, in place of in-person gigs, she has been holding Facebook Live concerts twice a week.

“Watching a livestreaming gig makes you feel less isolated,” says Kelly. “You see people’s comments in real time creating that back-and-forth vibe you get at a live gig.”

This performer takes requests from her 350-song catalog of covers as well as original compositions like crowd favorite, “If You Teach a Bird to Sing.”

Years ago, Kelly started the Lady Musician Brunch Group, which is a support system for female performers from Long Island who help each other get gigs and cross-promote.

“I really believe in community not competition,” she says. “By working together we all rise.”

Padden calls herself “a one-woman folk-rock riot” performing three to four gigs each weekend throughout Nassau, Suffolk and Manhattan. Now, she strictly gigs Sunday nights at 7:30 p.m. on Facebook Live, dubbing it her “House(bound) concert” series and performing covers as well as originals like “White Flag” and new song “Pirate Queen.”

“These livestreams have really become a port in the storm for me during this crazy pandemic,” says Padden, 34, who grew up in Farmingdale. “I enjoy the interactive element. You can’t talk back to your favorite performer on Netflix. But, the trick is not getting too distracted as you are trying to sing.”

Despite the miracles of modern technology, Padden feels people will be craving in-person contact.

“I think people will get back to live events because they are missing it so much,” she says. “You don’t feel that vibration in our bodies with the livestream. That definitely gets lost through a screen.”

Although she misses playing live gigs, Sweeney, 32, of Copiague has found an extra benefit to livestreaming her blend of blues, pop and R&B.

“The nice thing is the life span of the livestream exists beyond when you are actually performing,” says Sweeney, who recently released her single, “Coyote.” “You can get engagement even after you are done because people can share it.”

Through each performance, a virtual tip cup is available for viewers to show their support monetarily.

“People are sensitive to what artists are going through,” says Sweeney. “They are recognizing that our jobs are entirely based on being able to create and share what we do. Everyone has been generous and I plan to continue it even after the quarantine.”

Just as the pandemic hit and the quarantine began, Bella released her new self-titled EP featuring the single, “Jack Honey.” “It deferred everything I planned in terms of promotion,” says Bella, 36, of Merrick. “This was after two years of preparation.”

She had 27 gigs booked in April at places like The Irish coffee Pub of East Islip, West Hampton Beach Brewery, Tres Palms of Babylon, RHUM in Patchogue and the Campagne House in Bethpage. All of them got scrapped.

Immediately she brought her music, described as “folk-pop with a rock edge and a twist of R&B,” to Facebook on Tuesdays and Thursdays with some streams drawing over 2,000 viewers.

“This platform allows you to interact with people you might not have otherwise from the stage,” she says. “It’s not just local. People can watch you from all over.”

In order to not compete with other livestreams, Creus, 31, of Farmingdale recently got in her pajamas, lit some candles and performed chill music for night owls at 1 a.m. and 2:50 a.m.

“I’m trying different times for different moods,” says Creus, who has been playing cinematic R&B on both piano and guitar around Long Island for 10 years. “People seem to feel comforted by the live music. I’ve been playing feel-good songs with uplifting messages.”

Despite playing remotely, she still gets that performance buzz.

“The second some people showed up on the livestream I felt that same gig energy well up inside me,” says Creus, who was about to film a video for her song, “This Time” before the quarantine. “I actually got emotional that we were still able to connect because we are all going through this together.”

LI drive-in movie, concert schedule for the spring and summer
Take a nature walk at Sands Point Preserve, more things to do this weekend
Top LI chef sells pasta, sauces at farmers markets
Didn’t find what you were looking for?