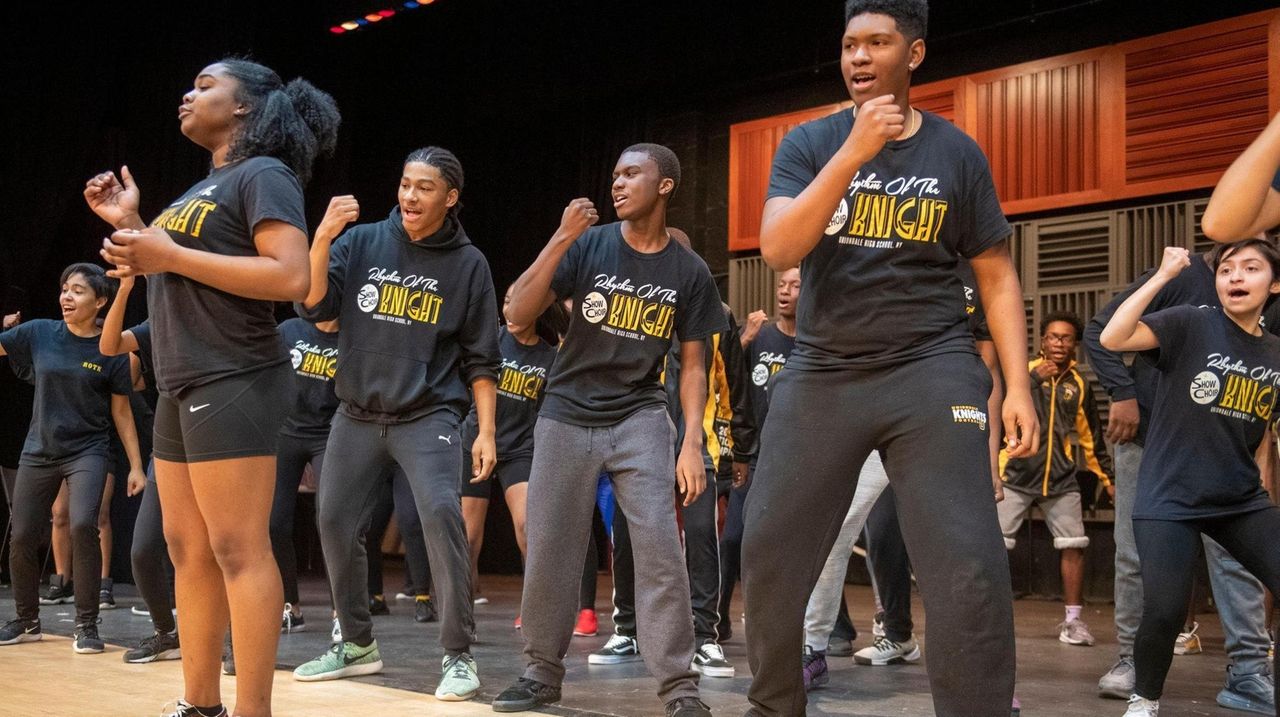 Jabalie Mitchell had a bad feeling in his stomach as he walked home from school.

"I got this vibe, something was off," the 17-year-old Uniondale High School student says. "My house, it used to be really loud. That day it got really quiet."

On the night his father died, Mitchell was the first to arrive home. "I opened the door, walked upstairs and he was gone. He was gone on the floor and I had nobody.”

Grieving a profound loss, Mitchell is slowly finding solace — and strength — in an unlikely place: his school's show choir. And he's not alone. He's one of three students — Mitchell, Renand Accius, 17, and Deomiee Scales-Melvin, 16 — who turned to the renowned Rhythm of the Knight choir this year after the deaths or illnesses of family members uprooted their lives.

During a recent rehearsal held in preparation for their upcoming Holiday Spectacular concert Dec. 13 and 14 at Uniondale High School, Mitchell, Accius and Scales-Melvin stand out in the group, swaying in unison to the tune of “Feliz Navidad.” Their grief is replaced  by smiles and songs.

“I believe [being in the choir] has helped each and every one of them,” says director Lynette Carr-Hicks, 50. “Whatever they went through, or are going through, in the choir you just don’t see it.”

‘Music was the only thing keeping me together’

“I was a person that didn’t care about anything,” Mitchell, a junior, says through a sigh as he describes the young man he was before joining Rhythm of the Knight. "My grades were just down. I just was lost." He turned to the choir after the deaths of his three guardians: first his grandmother in 2012, his father in 2016, then his grandfather two years ago.

"I told myself when those three passed I wasn’t going to look down on myself anymore. I want to be the person everyone knows I can be.” Noticing himself slipping down what he calls a dark path of grief with little motivation, Mitchell says “music was the only thing keeping" him together. He picked up a passion for R&B tunes from his father, a love of Classical music from his grandfather, an interest in religious tracks from his grandmother, and channeled it all into the show choir.

"I told myself when those three passed I wasn’t going to look down on myself anymore. I want to be the person everyone knows I can be.”

After seeing Rhythm members walk the halls with “such pride” last year, he decided to audition. “They put something in my eyes that I wanted to put in everyone’s. I thought, why can't I be like that?”

His decision to join a group activity after experiencing loss is not uncommon, according to Michelle Graff, clinical director at Roslyn Harbor's COPE Foundation, which focuses on grieving families. Teens, she explains, tend to rely heavily on their peers and social structures for support. “Teenage years are tough enough as it is. To add a loss, it can be really devastating,” says Graff. “They want a sense of normalcy and inclusion.”

Carr-Hicks' choir students spend anywhere from three to five hours after school on Mondays, Wednesdays and Fridays practicing musical numbers, doing homework and having meals together. "It's really like a big old family," she says.

It's all in the family

Longing for his own sense of inclusion, Deomiee Scales-Melvin tried out for the choir not long after checking his mother into Cliffside Rehabilitation & Residential Health Care Center in Flushing, Queens.

“I came from a traditional musical family,” says the soft-spoken sophomore who balances singing tenor with a spot on the football team. Leaning by the piano in Carr-Hicks’ classroom, he credits his mother for his intense connection with music. “Once I heard her voice, it triggered [me].”

On March 6, 2018, his mother was taken away from his household in Florida after she suffered a series of strokes that left her without motion on the right side of her body. She was experiencing complications from diabetes and kidney failure, Scales-Melvin says.

“I found her and she was lying on the floor. We went to the hospital the next day and found out she had two strokes. Two strokes,” he says. “At that time, she lost her whole right side … Ever since then, she’s just been the same.”

After that, Scales-Melvin went to live with his “two amazing, beautiful aunts” Ulisa Melvin and Deanna Weeks in Uniondale, who both attended Uniondale High School and sang in the choir before Rhythm of the Knight was established in 2010. “I’m the last of the family to come to Uniondale.”

In the choir, Scales-Melvin is not only finding strength in family tradition, but creating a path of his own. Carr-Hicks boasts of seeing Scales-Melvin and the other young men come out of their shells when they hit the stage.

Choir 'opened something up inside me'

Renand Accius describes his younger self with one word: quiet. But three months into his show choir career, that's slowly changing. "I still am a quiet kid, but I'm a little bit more open," he says. "Something opened up in me when I joined."

Like his peers, Accius joined the group after experiencing personal hardship. It was the death of his aunt, with whom he shared a love of music, that nudged him toward finding the courage to sing on stage. "My aunt died Aug. 5. This year, it's different," he says. "She's proud of me. She would have loved it."

For Accius, speaking about his loss is still raw. The choir helps him express himself. "There are some songs that can help you speak out loud without having to say it."

"The choir lets you just let go and be free," Carr-Hicks says.

As Accius and his peers find their footing with the group’s more than three dozen other members, the choir is becoming more than an after-school activity; it’s a family, they say. “Everyone can lean on each other,” says Mitchell. “It's a crucial part of my life. Whatever happens outside the school, it doesn’t really matter; whatever happens in this choir boosts me up.”

The Rhythm of the Knight show choir will perform holiday tunes like "Feliz Navidad" and "Ring Silver Bells" to celebrate the holiday season.