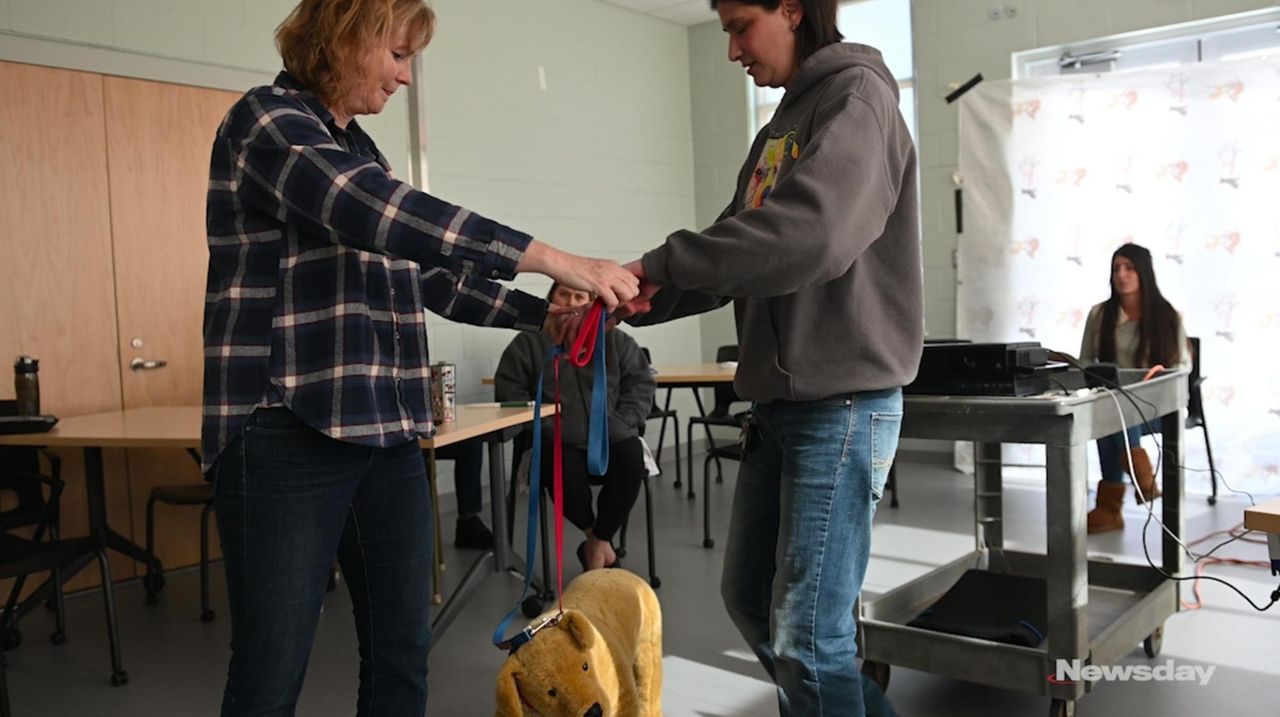 Even an old dog can learn new tricks.

The Babylon Town Animal Shelter recently applied this well-worn adage to its staff and volunteers by enlisting a consultant to provide training on safety and limiting stress for animals and their handlers.

“As an animal shelter, our mission is to continually improve . . . and this is one of the steps we’re taking,” said shelter director Chris Elton.

Babylon in February hired Loehr Animal Behavior in Mars Hill, North Carolina for up to $3,000 for two days of training. Owner Trish McMillan, who has 23 years of shelter experience, including seven years with the ASPCA, consults internationally.

Elton said that since the shelter is new — having moved in October to a new facility in North Amityville from West Babylon — he thought it important to examine the shelter’s operating procedures.

“We’ve designed this shelter to be less stressful, because less stress means more adoptability,” he said, noting that dogs and cats are now unable to see or hear each other and dog kennels no longer face each other.

McMillan held the training workshops at the end of March, meeting with the shelter’s 20-member staff and 40 volunteers. She addressed things like handling techniques and what she called the most important aspect of interacting with animals: body language.

“A lot of things that dogs read very well in one another are not things that people read well,” she said. For instance, a dog laying on its back doesn’t necessarily want a belly rub, she said, because other body language could indicate a defensive pose that means “please stop.”

“People want to touch every dog, and this is what gets us into trouble,” she said.

Workers said one of the most important lessons learned in the training were techniques to break up fighting dogs while avoiding injury to themselves.

McMillan said there will always be staff injuries just by the nature of the work, comparing it to fire prevention.

“You’re going to have your smoke alarms, your fire extinguishers, but we’re never going to get injuries from fires down to zero,” she said. “My goal is to give people the tools to minimize injuries and to know what to do if they slip up.”

The handling of cats was also addressed, and volunteer Barbara Porcella and worker Jada Cooper said they both learned about behaviors they were doing that could cause stress for a cat.

“I didn’t realize how extremely disruptive it is when we cat-test dogs,” Cooper said, having learned cats can be impacted by the brief interaction for as long as 24 hours afterward.

Porcella said she was surprised to learn cats shouldn’t be handled by the scruff of their necks.

“I definitely realized there were things I was doing that are not as beneficial to the cat as I had thought,” she said.

Elton said he learned a lot as well, and said the shelter will continue to reinforce the lessons that McMillan taught with ongoing workshops.

“We learned quite a bit about safety but also some modern sheltering techniques,” he said. “We have a lot of homework to do.”