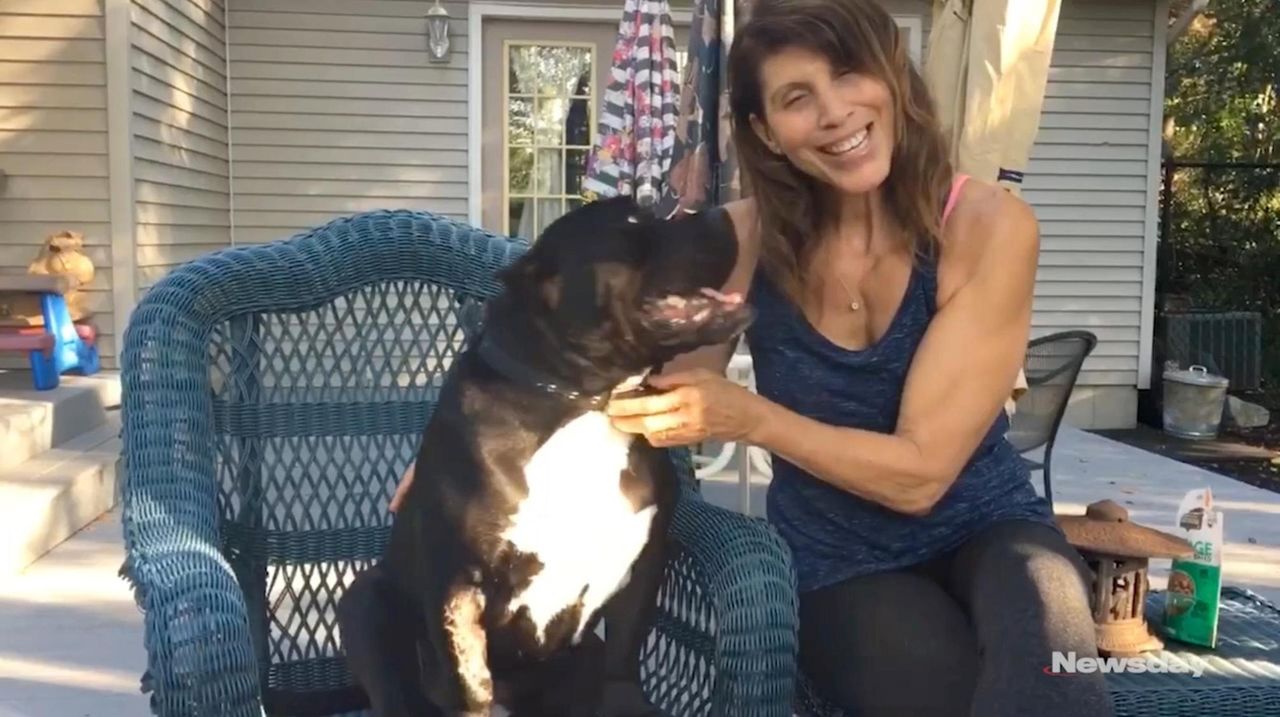 The end of the summer has gone to the dogs as the Hamptons Barking Beauty Pageant takes over the Westhampton Performing Arts Center on Thursday. Three judges from the pet industry will grade 25 dogs in various categories including best active wear, best glamour wear, talent portion, most photogenic and most congenial canine. On Wednesday, Kelly Keenan of Suffolk County showed off her dog King Mufasa's tricks and Maria Cavanagh did the same with her pooch Lucy Belle. Credit: Newsday / David Criblez

The end of the summer has gone to the dogs as the Hamptons Barking Beauty Pageant takes over the Westhampton Performing Arts Center on Thursday.

“This is just like the Miss America Pageant except with dogs as contestants,” says founder Leslie Kennedy who will serve as the host with her Yorkie, SalliSue. “They will all be on camera projected onto a screen so even the tiniest dog will be seen very well.”

Three judges from the pet industry will grade 25 dogs in various categories including best active wear, best glamour wear, talent portion, most photogenic and most congenial canine. Proceeds from the event will go toward RSVP Animal Welfare & Rescue in East Moriches as well as the Westhampton Beach PAC Arts Academy.

Here are four of the canine contestants:

This pup is making her competition debut wearing a mermaid-themed tutu and a French-themed print dress in cream and red pattern with black accents.

“Lucy Belle is sweet and feisty. She is the runt of the litter and the only female among her three male siblings, but she is clearly the boss,” says owner Maria Cavanagh. “They all respect her and they never pick a fight with her — they know who the real Alpha is.”

For her trick, Lucy Belle will be both standing and turning on command.

Last year, this rescue dog was the runner-up to the crown. This time, he’s going for the gold.

In the summer of 2018, André wore a silk black tuxedo, top hat, rose boutonniere and cuffs for the formal wear portion. Meanwhile he went classic Hamptons in the activewear division donning Hawaiian board shorts with cargo pockets and a polo shirt. For the talent portion, André performed an agility run with a single bar jump, weave polls, a tunnel and hoop jump — a division he won.

“André is a tiny but mighty dog with a lot of confidence,” says owner Alyssa Tuthill. “It could be 4:30 a.m. and he’s wants to play. He’s full of energy.”

This year his new outfits and talent trick are both top secret and will be revealed on the night of the pageant.

Even though this is his first time competing, this is a dog with movie star swagger.

“I have four daughters and my youngest is Hannah. My husband thought calling him Woody after Woody Allen was appropriate because of the movie, ‘Hannah and Her Sisters,’ ” says owner Jamie Feit. “Woody has a very chill, loving and cuddly personality, but he’s terrified of bicycles and joggers.”

Woody will get formal with a bow tie and handkerchief and go causal with sunglasses and beach apparel. For agility, he will show off his ability to army crawl across the floor and give high-fives.

Call it a comeback as this rescue dog overcame a severe injury and is returning to compete for his second year in a row.

“Mufasa was rescued with a severe injury to his front right leg, which became twisted and deformed,” says owner Kelly Keenan. “He would actually trip over it and had a lot of trouble walking or going up steps.”

Through RSVP Animal Rescue and a large donation in Mufasa’s honor, the pup was able to get a surgical procedure done to repair his leg.

“This pageant helped to change his life,” adds Keenan. “It’s been months of plates, screws, pins, cast changes, surgeries and rehabilitation. His twisted leg is now almost straight. He can walk really well now and that’s his agility trick.”