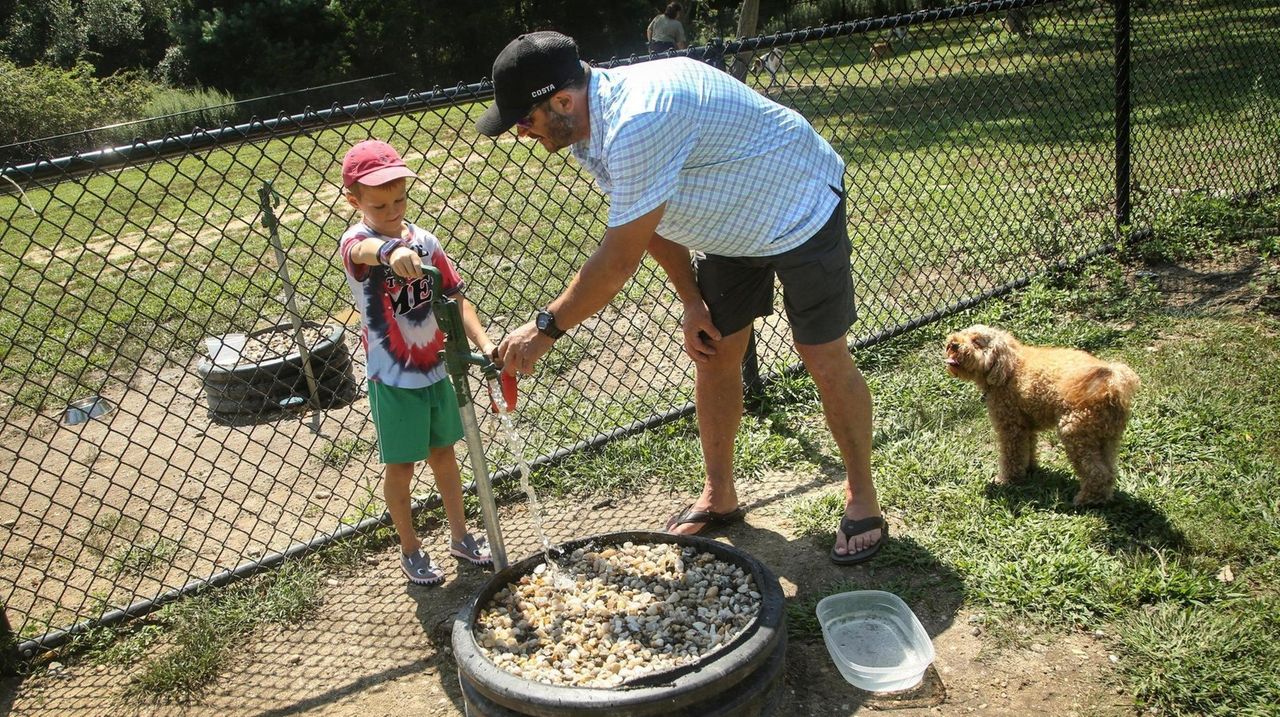 Some pampered pooches on Long Island have a new place to run wild — a dog run in Bay Shore’s Gardiner Park, as seen on Saturday, where leashes are optional. Credit: Newsday / Antonio Planas

Some pooches on Long Island have a new place to run wild — a dog park in Suffolk County’s Gardiner Park where leashes are optional.

The 1.5-acre dog run in Bay Shore, which opened last month, separates dogs by size in two fenced-in areas. The dog park also boasts an agility training area where canines can test their athleticism, skills and grace going through, around and over obstacles such as a suspended tire and wooden beams and planks.

The agility area is the first of its kind for a park in Suffolk County, officials said.

The dog run was full of pups of many proportions and persuasions on Thursday. While their owners socialized with each other, most of the dogs were off leash and running free.

But not all of them.

Nancy Perna, 72, of Oakdale, kept her 7-year-old Havanese named Harley on a leash, for training purposes, while he tried his paws at the agility course.

“It’s part of being obedient and listening and just having more fun with him,” Perna said. “Fun with dogs, it’s a wonderful thing.”

State Sen. Phil Boyle (R-Bay Shore), said the dog run was many years in the making and a bipartisan effort between him and former Suffolk County Legis. Monica Martinez, who now is his Democratic colleague in the Senate.

Martinez wrote the county legislation while Boyle secured a $100,000 state grant in 2016 to build the dog run, county officials said.

Boyle was at the park last week with his toy fox terrier, Livvy. Boyle has been a regular at the park for years. He loves seeing people walk the park’s trails with their furry best friends, but dogs needed a place to roam unleashed, he said.

“It’s going to be a great place to meet new friends, and some of them have four legs,” Boyle said. “It’s much easier for the dogs to socialize because on the leash, they get tangled up. You have groups over there with sometimes 10 dogs in the summer and they are like going around each other. … I love the fact that it is the only park in Suffolk County that has an agility course, not that my dog would ever be able to do it.”

The area for small dogs is 80 feet by 300 feet, big dogs, 120 feet by 300 feet, while the agility training area measures 40 feet by 100 feet. Every area is enclosed by a black, vinyl-coated 4-foot-high fence, and there are two water stations, officials said.

George was not shy about jumping on strangers.

“He’s getting all the exercise he needs for his age and the socialization,” Lunz said. “He’s going to sleep all day for me now.”

Mike Kaplow, 76, of Huntington, was at the park with Loki, his 5-year-old Siberian husky.