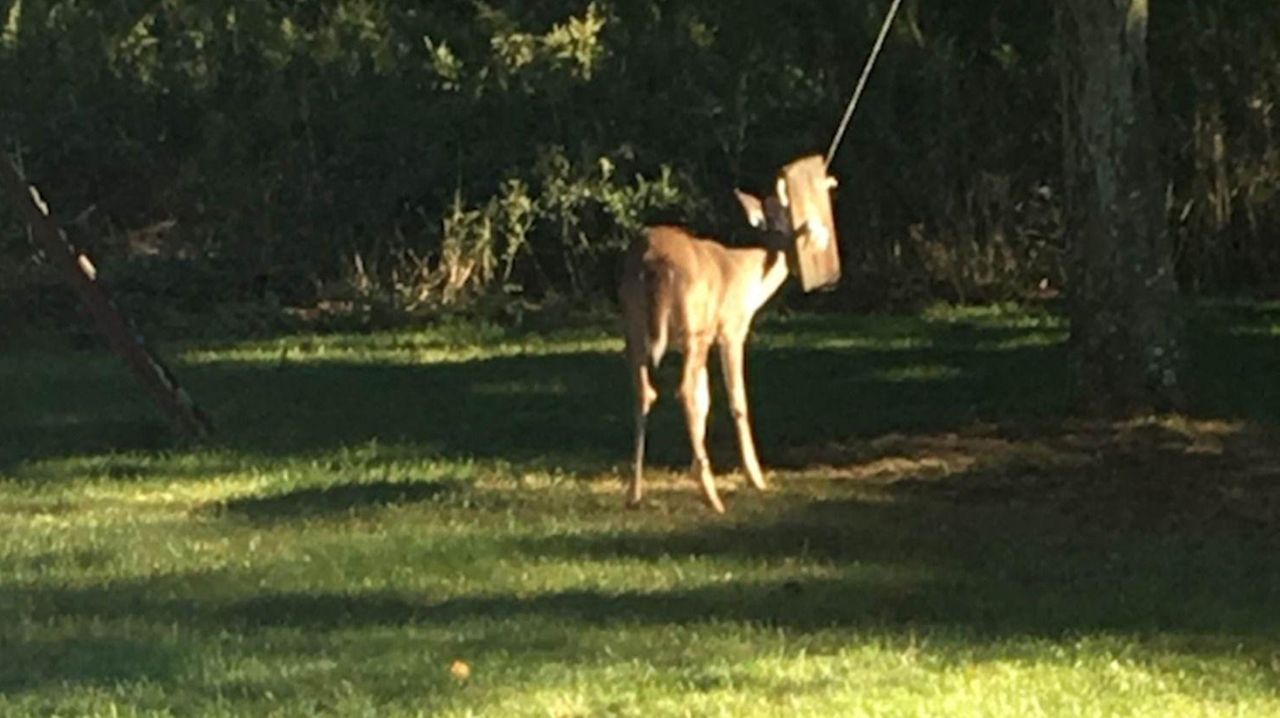 A deer was rescued after becoming trapped in a Center Moriches backyard swing when its antlers got tangled up in the rope on Tuesday, Oct. 10, 2017. Police were called to free the animal, which was not injured. Credit: Skyler Dobrie

It was a wracking experience.

A young deer ended up wearing a tree swing on its head Tuesday when its antlers got tangled up in the rope, trapping the animal in a Center Moriches backyard before it was rescued by police.

“It looked like it had been there for a while,” said eighth-grader Skyler Dobrie, who discovered the oh-deer situation when she woke up and looked out her bedroom window just after 9:30 a.m. “The grass was all stamped down and there’s like footprints everywhere.”

Skyler shouted for her veterinarian-wannabe sister, Shea, 8, to look at the animal, one of many that the family sees because the Dobrie home backs onto Terrell River County Park.

The tree swing victim was one of the 10 or so individual deer that the family can identify by sight. It had first shown up about two years ago, shortly after its birth. The family had watched it grow to its current height, just under 3 feet.

The girls’ mother went out to see if she could help, but her presence just caused the deer to try to run around the tree, the rope jerking its head back, said Skyler, 13.

“Most of the time I was sad, because he seemed so helpless,” the teenager said. “He couldn’t even sit down.”

Her father, John Dobrie, a nurse and a volunteer firefighter, called the police from his workplace, warning his wife and two daughters not to get too close to the deer in case it kicked in panic.

Suffolk police described it as a quick job. One of two emergency service officers took cover behind the tree and extended a long pole with a clipper at the end.

Deer have kicked officers before, so precautions were taken, said Sgt. Pat Minogue of the emergency service unit.

“They get scared,” he said of the animals. “They’re not really looking to kick you. They’re looking to get away.”

In this case, one snip and it was over.

The deer, its head weighed down by a wood plank, turned around, ran and bucked the swing off its head, a video shot by Skyler shows. It hoofed it out of the yard.

“I was happy for him,” the teenager said. “I was thinking he’s probably not going to come back to our property.”

All day, the Dobries looked for the return of the little tree swing victim.

“He might be a little traumatized for a few days,” the father said. “I’m sure he’ll be back, because there’s plenty of food for him around here to eat.”

He quipped to his daughters: “Maybe next time, he’ll try the slide.”