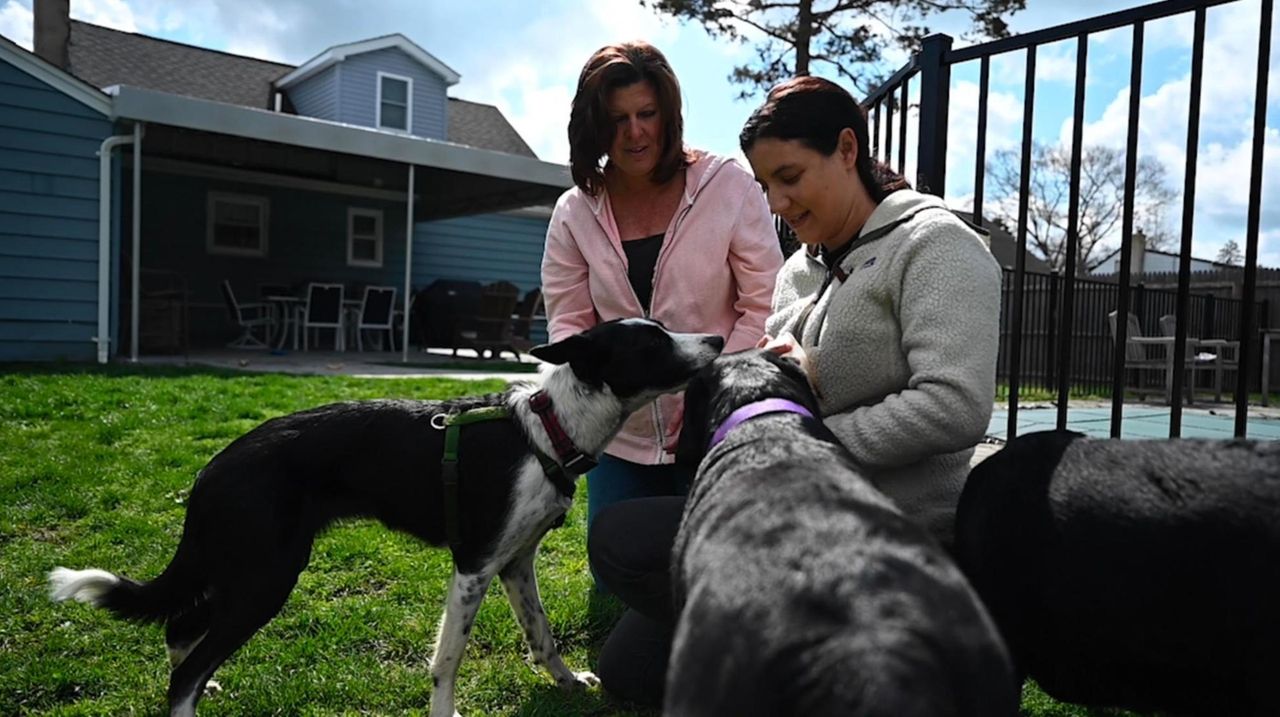 Many Long Islanders got a new pet during the COVID-19 pandemic. Now that they are transitioning back to work, some owners are concerned about their furry friends being home alone all day. Credit: Danielle Silverman

Home alone may come as a shock to all those stress-easing furry four-paw companions adopted during the pandemic whose owners may be returning to the office, if only part time, experts said.

"It’s very important that people start preparing their pets now, before they have to go back," said Gia Savocchi, a certified animal behaviorist consultant for the Town of Oyster Bay with her own East Northport-based practice, Thinking Canine.

"Leaving dogs and cats alone a little bit each day is really important so we can see and gauge what their reaction will be," she said by telephone.

Agreed Michael Costa, supervisor, animal control officer, for the Town of Huntington: "Prepare by taking small kinds of impromptu excursions and leaving the dog behind — and extending [the time] in small increments can really help."

Cats, of course, are nocturnal creatures and thus are much less likely to feel separation anxiety, the experts say. And cats are renowned for their independence — another crucial difference.

"A dog might get destructive or bark or howl or any of these types of behavior, whereas a cat would probably hide, and so it’s not as easily detectable, and they are not affected by it as much as dogs," said Pamela Green, executive director, Kent Animal Shelter in Calverton.

Cats probably suffer much more from changes in their environment, experts said, explaining moving to a new home is much more traumatic than their owners’ new schedule.

Further, "Cats are good at entertaining themselves," said Dr. Diane Levitan, executive director of East Meadow's Helping PAW, and an associate professor at LIU's College of Veterinary Medicine. Both species benefit from being left with puzzle toys — especially if they only get them when left alone.

A number of experts also advised adopting kittens in pairs — so they have a built-in playmate.

With dogs, unless they are part of the great migration back to the office, don’t despair, experts said, if the first trial departure is less than wholly successful.

There are lots of helpful strategies and tools, from cameras to special toys, like hollow hard rubber chew toys filled with frozen peanut butter, to crates to foods that contain tryptophan and anti-anxiety or antidepressant medications. For those lucky enough to have securely fenced backyards, pet doors are an option.

Patience is a must. "Separation anxiety is a behavioral issue," said Green. "It can be remedied, but it does take time."

One crucial technique may be harder on the owner: Emotional goodbyes and greetings are verboten, experts say. The aim, much like leaving a child in day care for the first time, is to make crossing the border between being with the parent and not being with them as routine and ordinary as possible.

"Don’t say, ‘Now behave yourself,’ " said Dr. Katherine Albro Houpt, a veterinarian with a doctorate in behavioral psychology and a professor emeritus at Cornell University. "You don’t have to say anything at all, really, don’t make a big deal out of it."

That same matter-of-fact calm is how dog walkers and owners should handle their arrival. "They certainly shouldn’t greet the dog enthusiastically when they come in," she advised.

For dog walkers, she counseled: "Just say: ‘Hi Fido,’ and snap the leash on," she said. For owners with excitable dogs, she said: "In general, try to ignore the dog; don’t speak to him; don’t touch him until he is calm."

"And then when he stops jumping, maybe ask him to sit and pet him," and then go for a walk, Houpt said.

A bit of acting also is recommended by Barbara Pezzanite, a certified applied animal behaviorist, who works with the Animal Rescue Fund of the Hamptons Inc.

Go through the usual motions of leaving — put on shoes and get the keys — and then sit down or do a chore until your dog regains calm, she advises. And teach your dog to sit and stay while you are out of its sight, gradually lengthening the time.

Think of pooch as a toddler

Even if your dog roams freely when you are home, start training for a return to work by confining it to one room, the experts said.

Just like having a toddler, clear out any hazards, from wires that may chewed to possibly poisonous cleaning products — or just useful or prized objects, from remote controls to antique chairs.

Of course, if left in the kitchen, the many temptations include the trash, often an easy target.

Like many who adopted shelter dogs during the pandemic, Jordan Zarour, 28, of Long Beach, a physical therapist, wants to make up for any deprivations or cruelties his new companion may have experienced. "When you adopt a dog, you want them to know they have their freedom and are loved," he said.

"Initially, I would leave him out in the house — free," he said. "That was fine," Zarour continued, "until he started eating the blinds, sleeping on clothes and eating the garbage."

Mavericks, a young Husky mix, now has been crate-trained and has a dog walker. He also exemplifies the positives of bringing a dog to work; Mavericks does well with clients at The Nomadic Athlete — and if they bring their own dogs, is a fine playmate.

And he gets lots of runs with his owner. "He’s perfect; when I was looking for a dog, I wanted somebody super active," said Zarour.

Zarour’s experience bears out the importance of exercise, as the experts all agreed: a good dog is a tired dog.

In severe cases, talk to veterinarian

Anyone whose dog has a severe case of separation anxiety should consult their veterinarian to rule out any illness and explore calming medications, experts said.

If hiring a trainer or behaviorist, ensure they are properly credentialed and avoid anyone who uses punishments like shock collars or who promises to return a reformed dog after a few weeks away at a training center, said Dr. Houpt.

Forbearance is the best way to handle any semi-catastrophes like torn sofa cushions or broken doors owners may return to. "You do nothing," she said, "because if you punish the dog, he has no idea why he's being punished."

The time for any correction is fleeting indeed: "Pick up a pencil and drop it; that's the amount of time you have to punish him; after that, he has no idea why he is being punished."

Behavioral experts offer tips for easing your pets anxiety when you return to the office after spending months working from home during the pandemic: