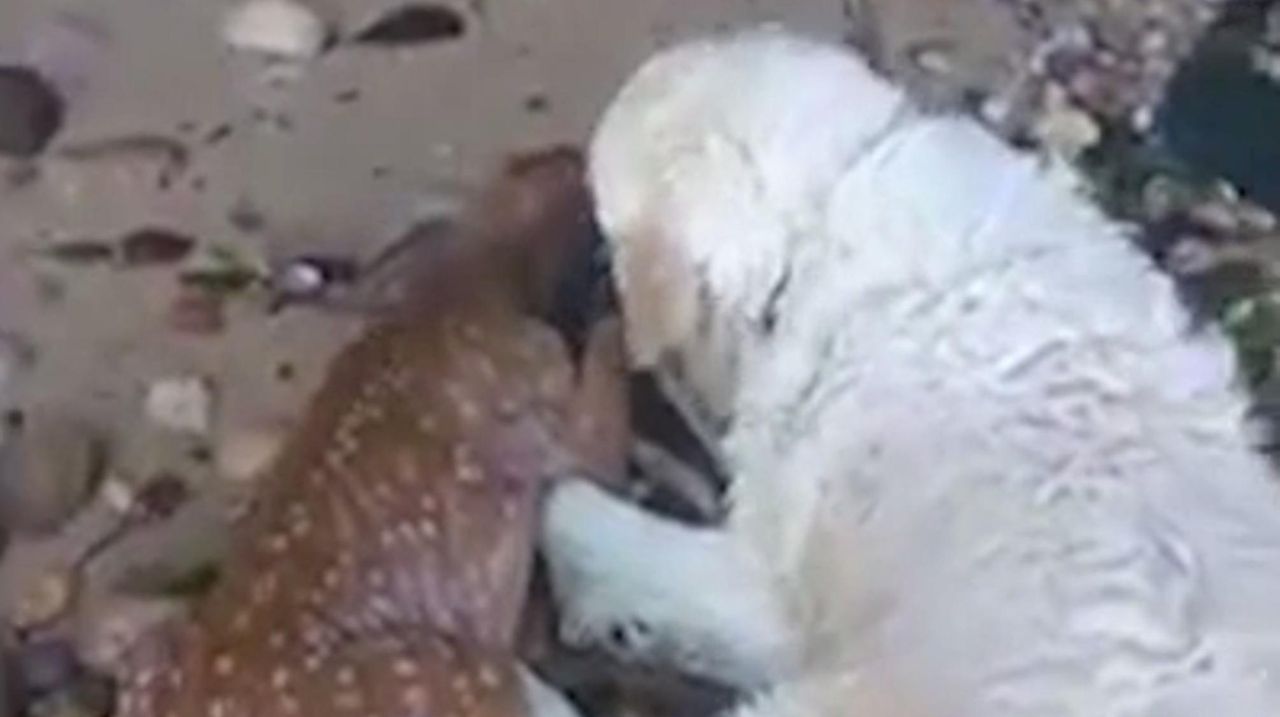 An East Setauket pup is being hailed as a hero for pulling a fawn flailing in Port Jefferson Harbor back to shore.

Mark Freeley, 53, was out for a walk with his dogs, Storm and Sara, on Sunday morning when they spotted a small fawn swimming in the harbor. Storm, a 6-year-old English golden retriever, swam out to the fawn, grabbed it by its neck and started pulling it to shore, a video shows.

Once on land, the fawn ran off but soon collapsed, Freeley said.

“Storm laid down next to it and was nudging it and pulling it but it looked pretty tired,” Freeley said.

Freeley called nonprofit, Strong Island Animal Rescue League, and led Frankie Floridia, the organization’s co-founder, to where they had left the fawn. But as they approached the deer it ran back into the water because it was so “disoriented and flustered,” another co-founder, Erica Kutzing, said.

Floridia swam out to retrieve the fawn, which he said is about 3 months old.

“It was weak, covered in ticks, had an eye injury and some abrasions,” he said.

The fawn was taken to Save the Animals Rescue Foundation, a wildlife rehabilitator in Middle Island, and is recovering nicely, Kutzing said.

“I think it was a great thing for its instincts to kick in, to go out there and rescue it,” Floridia said of Storm. “At that point, that’s exactly what I would have done.”

Freeley posted the video of Storm carrying the fawn to land on his Facebook page and has received an overwhelming response. The clip has been viewed more than 1 million times and shared more than 27,500 times since it was posted Sunday.

“I think it’s so popular because of the concern that Storm showed to the fawn afterward when it came to the beach,” Freeley said. “He’s a very affectionate, very loving dog.”