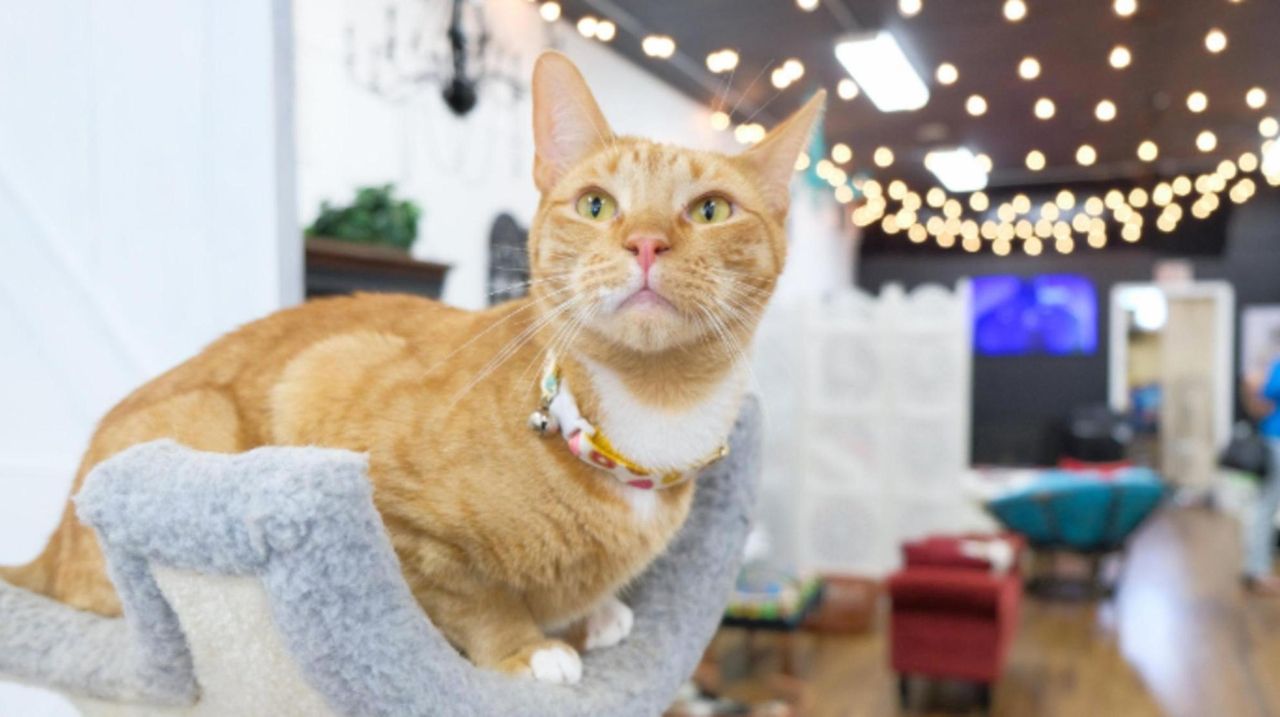 The Shabby Tabby Cat Café in West Sayville, the first of its kind on Long Island, is a place where adoptable cats and their prospective “parents” can meet and check each other out, owner and founder Ryan Shea said on Tuesday, Sept. 25. The cafe, in a storefront at 249 W. Main St., serves as the cats’ home until they’re adopted. Credit: Daniel Brennan

People come here to check out the cute prospects, hoping to find a good match.

It sounds like the scene at a nightclub, but it’s the Shabby Tabby Cat Cafe in West Sayville, where seven days a week cats up for adoption and their prospective “parents” can meet and check each other out.

Cafe owner Ryan Shea of Yaphank says it’s the first of its kind on Long Island, but it might be starting a trend. Shabby Tabby was slated to open on Saturday, and in January a Lake Ronkonkoma resident plans to open A Kitten Kadoodle Coffee Cafe in Selden.

“I think it’s a great idea,” says Gail Pitcher, 64, of the cat cafe concept. The retired database administrator and Sayville resident already has three cats and was looking for a possible fourth Wednesday during a soft opening of the Shabby Tabby.

The cafe, in a 1,300-square-foot storefront at 249 W. Main St. that serves as the cats’ home until they’re adopted, has about 20 cats living there that came from the Golden Paw Society in Huntington. Their elegant digs, decorated in red, teal, and black and white and antiques, include Wi-Fi, a large-screen television for cats and humans to watch together, toys for the cats to play with and beds and shelves and bridges for the felines to climb.

Passers-by can see the cats through the window even when the cafe is closed.

“They’re roaming free and they’re not in a cage, so you get to see their personalities,” says Lisa Bustamante, 35, of Sayville. The dietitian, personal trainer and self-described “crazy cat lover” was also attending the opening, held for donors to a 45-day Kickstarter campaign that raised $30,000 for the renovation of the space.

Shea, 36, a nurse at Stony Brook Southampton Hospital, says she opened the cafe to find the cats a home — it’s not about the food, though coffee, tea and wrapped baked goods are on the menu.

It costs $15 an hour for adults and $10 for children 13 and younger to spend time at the cafe.  The money goes for the care of the cats, rent and upkeep of the space, Shea says.

At some point she plans to offer various events, including wine tastings, but so far the match game seems to be working.

During the opening a couple adopted a black and white kitten named Pancake, which they said was perfect for the cat they already had at home named Waffles.

“I’m getting a lot of good feedback and people thinking about returning to adopt cats they saw,” Shea says.

Jennifer Rose Sinz, 44, plans to open the Selden cat cafe at 600 Middle Country Rd. She says it would be a natural for her.

“I’ve been an animal lover my whole life,” Sinz says. She’s a web and graphic designer who has 10 cats, three hound dogs, six ducks, four chickens and a rabbit at her Lake Ronkonkoma house.

Sinz says she also plans to have about 20 cats at a time living at her cafe, and that they will come from her All About Pets Rescue and feral colonies. People can mingle with the cats for up to three hours by making just a $2 donation.

Money for renovations to her 2,000-square-foot space is coming from her family savings accounts, Sinz says.

Plans also include activities and programs for children as well as adults, and a menu will feature coffee, tea, smoothies, vegetarian meals, salads and desserts.

“Children are going to be reading to the cats and making toys for the cats,” Sinz says. “When people read to cats it’s a stress reliever for the cats as well as the people.”

It’s $10 for children 13 and under and the money goes for the care of the cats, rent and upkeep of the space. It’s not a non-profit.