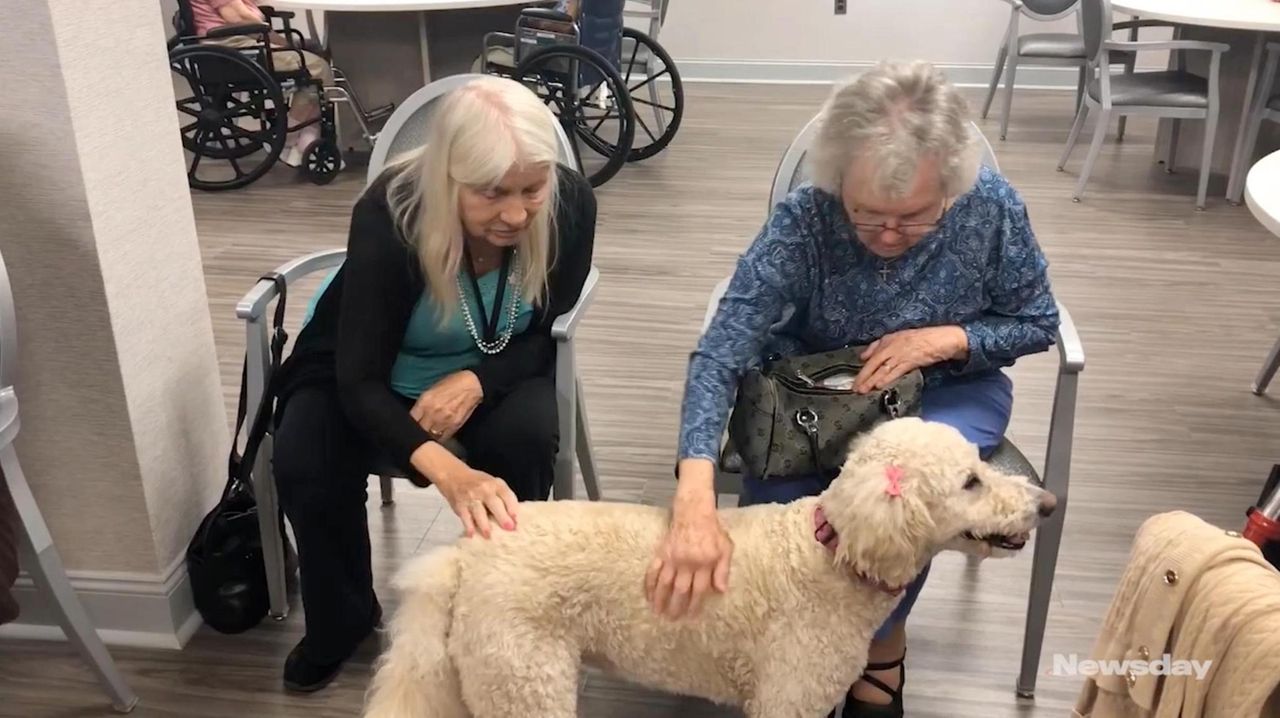 The nonprofit Therapy Dogs of Long Island brought goldendoodles Ken and Barbie and a 4-year-old shichon, Pumpkin, to Birchwood Assisted Living in East Northport, where residents played with the dogs and gave them treats. The residents look forward to each visit, which has happened twice a month for the past year.  Credit: Shayna Greene

Therapy dogs became a part of Terry Gallogly’s life after her now-10-year-old grandniece Lily was born with lissencephaly. Also known as “smooth brain,” it’s a condition where the brain is not fully developed and may result in intellectual disabilities and limited motor skills, according to the National Organization for Rare Disorders.

Gallogly wanted to find dogs that would have the right temperament to visit her grandniece and other children in hospitals. In 2014, she tested the idea after getting her goldendoodle, Ken, certified as a therapy dog and bringing him to St. Mary's Hospital for Children in Bayside, Queens.

“Everybody was standing around. We took [Lily’s] hand and put it on Ken’s head and she started processing right away,” said Smithtown's Gallogly, demonstrating how Lily’s face lit up. “Everyone was shocked and we’ve been going there every week since.”

On Aug. 13, the nonprofit Therapy Dogs of Long Island brought goldendoodles Ken and Barbie and a 4-year-old shichon, Pumpkin, to Birchwood Assisted Living in East Northport, where residents played with the dogs, throwing tennis balls and giving them treats. The residents look forward to each visit, which has happened twice a month for the past year.

“It was a lot of fun,” said resident Amy Kaye, whose dogs, Skye and Lexie, live with her son in Merrick. “I have two huskies at home so I don’t see them too often anymore so it’s nice that these lovely people bring their dogs to us.”

A few residents at Birchwood Assisted struggle with memory loss and early dementia, including five of the residents who were visited by Therapy Dogs of Long Island on Aug. 13.

“A lot of [the residents] light up and get really excited,” said Birchwood recreation director Adam Deitchman. “It’s good for them too in terms of a neurological standpoint. We find that memories like that, especially when they’re associated with previous [pets] they had… it immediately brings them back to that place and it further works on their memory loss.”

After her first visit to her grandniece in 2014, Gallogly continued to take her therapy dogs to St. Mary's Hospital for Children and also participated in various therapy dog events that national organizations Pet Partners and Love on a Leash arranged.

In 2017, she decided to start her own nonprofit that would allow for more interactive visits, including walking dogs and feeding them treats when they perform tricks.

In addition to Gallogly’s dogs Ken, Barbie and Pumpkin, the organization has 13 other trained therapy dogs and a group of volunteers who visit individuals or groups at least five times a week.

Gallogly said that in 2018 the organization visited more than 7,500 people. With the addition of several new dogs that will be completing Gallogly’s dog therapy classes, the plan is to visit 10,000 this year.

“The impact I think is tremendous,” said Gallogly. “The least the dogs do is bring joy. Sometimes, it’s life-changing.”