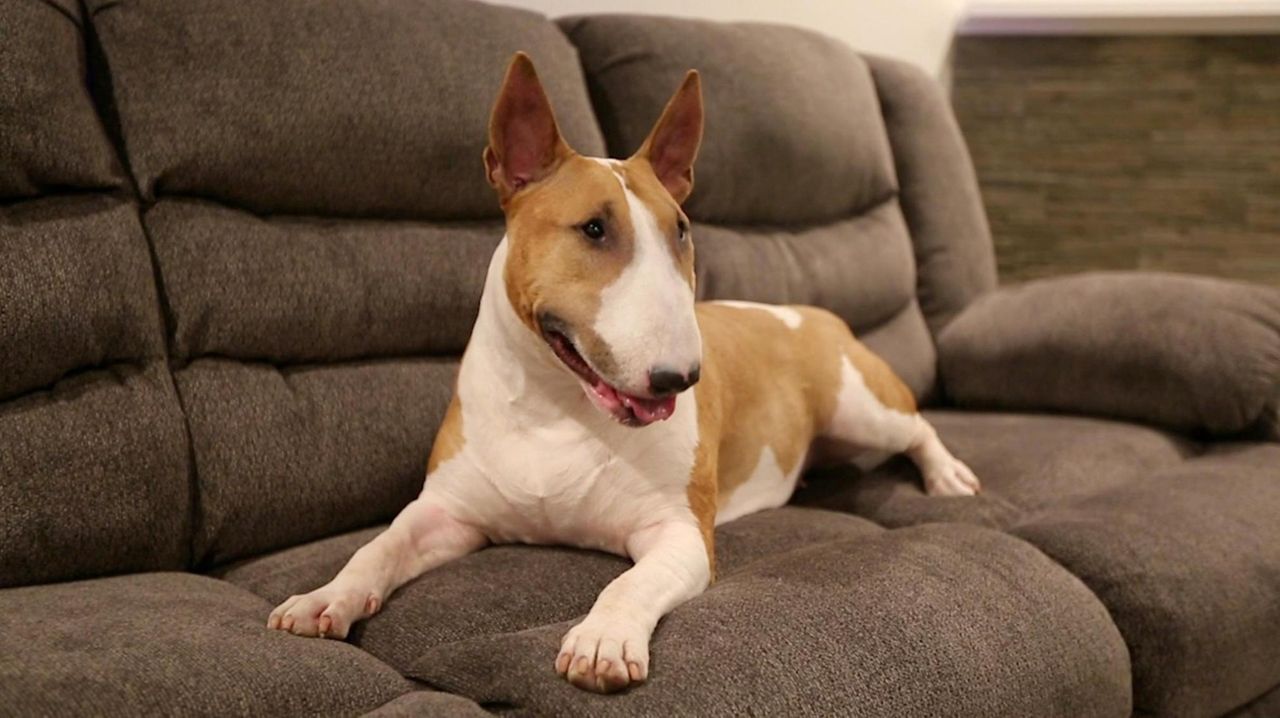 Alisha Hagen, 31, of Manorville, will be entering her bull terrier, Baci, into the 143rd Westminster Kennel Club Dog Show in Manhattan this week. Newsday got a sneak peek of Hagen training her pup for the big day.  Credit: Barry Sloan

Baci the bull terrier from Manorville has led a charmed life, collecting canine kudos far and wide in the run-up to her first appearance this week at the 143rd Westminster Kennel Club Dog Show in Manhattan.

Since making her dog show debut as a 10-month-old pup, Baci has garnered ribbons and rosettes at more than a dozen dog shows from Delaware to Ohio. In November she represented the U.S.  at an international dog show in Leiden, The Netherlands.

“It’s been a wild ride for us,” says Baci’s owner and handler Alisha Hagen, 31, an executive assistant for Competition BMW in Smithtown. Hagen says her prizewinning pet is “the total terrier package. She’s silly, determined and lovable. She knows how to shine for the judge in the show ring.”

Looking to howl for the home team? Here are profiles of Baci and six other local canines that are among 2,800 dogs from 50 states and 14 foreign countries vying for Best in Show.

MOST SURPRISING CANINE SMARTS In a group of people, she will show her social skills by greeting every individual.

WHAT WAGS HER TAIL When Hagen comes home from work, Baci runs a lap around the house and the yard.

OWNER Kelly Lockwood of Babylon. “Lincoln has that special look-at-me attitude that makes a show dog stand out," Lockwood says. "He commands attention when he’s in the ring.”

MOST SURPRISING CANINE SMARTS Lincoln knows what time his human dad comes home from work and waits for him by the door.

OWNER Consuelo Champlin of Westbury.  Cash is “a merry little hound with a great temperament and personality,” Champlin says. His Westminster-worthy traits include “good movement and proper structure,” she says. “Watching him move shows that he’s capable of doing the job beagles are bred to do.”

FAVORITE OUTING A beach day spent digging in the sand.

OWNER AND HANDLER Robert LaCorte of Old Bethpage. Lila has a “commanding appearance and a beautiful head,” LaCorte says. She recently shed 20 pounds through diet and exercise.

WHAT WAGS HER TAIL Meeting new people and other animals

MOST SURPRISING CANINE SMARTS At bedtime, Lila taps LaCorte’s leg with her paw until he says, “Do you want to go to bed?”

OWNERS Mary Ann and Andy Robertson of West Sayville, and Joni Lawrence of Commack. “He floats like a dream, and he's drop dead gorgeous,” says Mary Ann Robertson. He’s following in the footsteps of his mother, Willow, who entered Westminster a few years ago.

MOST SURPRISING CANINE SMARTS Nathan always finds a way to climb to the highest spot in the room or in the yard.

OWNER AND HANDLER Peter Festa of Smithtown.  Dailey is “a well-built bulldog” and “a flashy showman with great attitude,” Festa says.

WHAT WAGS HIS TAIL Dailey wiggles his whole behind when he meets new people, especially children.