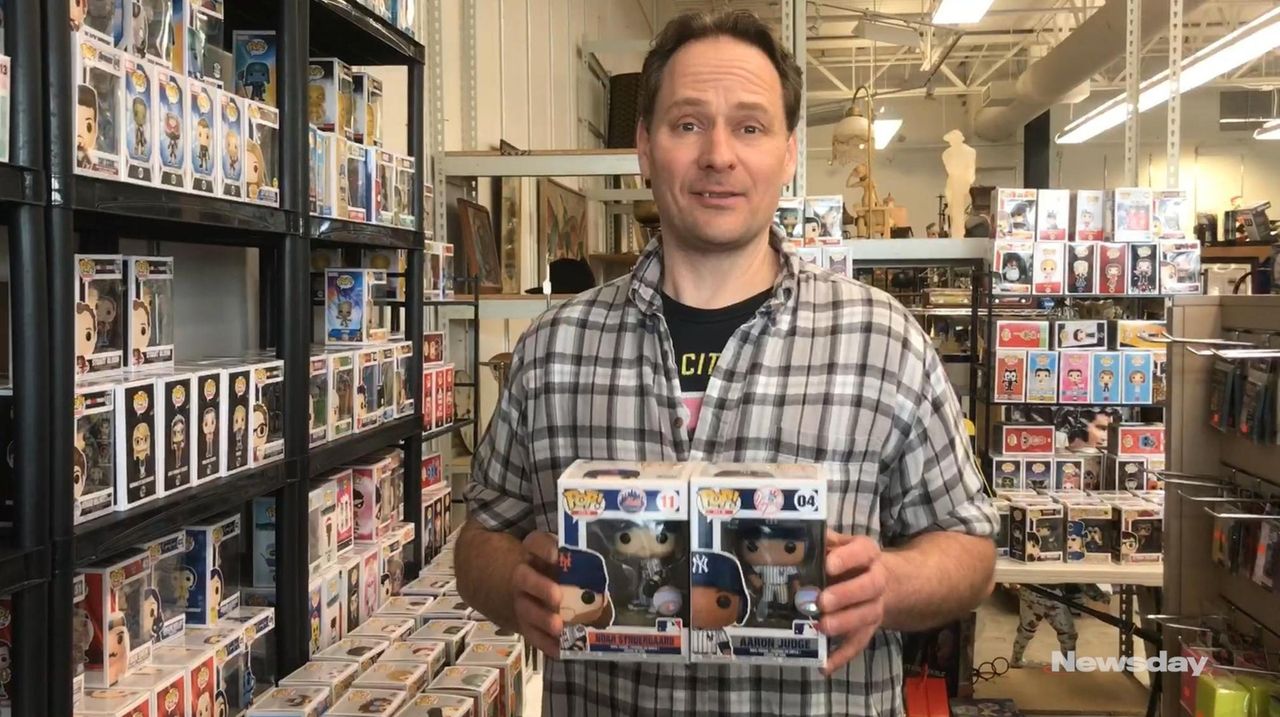 Jason McKee, 46, of East Patchogue, owner of Bellport Antiques and Collectibles on Thursday talked about some of the sports memorabilia gems that can be found at his store.  Credit: Newsday / David Criblez

“We’d bring the box back to my house and crack them open very carefully. The cards were stacked numerically then we’d trade our doubles,” recalls Goodman. “When I’d finish a complete series, I’d put them carefully in shoe box and surround it with tissue paper.”

By 1960, Goodman had built six to eight mint sets every year since he started. However, he lost it all when he failed to pack up his collection in a housing move.

“If I had those cards today, they would have been worth half a million dollars,” he declares. “By the mid-80s my passion came back and more. I became a maniac — totally addicted. I’d go to two to three shows every Saturday and Sunday. My house was so filled with cards, I had to make a path through the boxes.”

Collecting baseball cards and accompanying memorabilia is more than a hobby, it’s a lifestyle. Those who participate are always in a state of buying, selling or searching for specific items along with constantly curating their own personal collections.

“Once this stuff gets in your blood, it’s hard to get rid of it,” says Jason McKee, 46, of East Patchogue. “For a lot of collectors, the fun is the hunt. Once they get the item, they don’t know what to do with it, so they resell it for a profit.”

“I’ve owned enough pieces to know what’s real and what’s fake,” says McKee. “You can tell when they sign using a marker and they stop halfway through a letter, the marker bleeds a little bit.”

Across from McKee is the M. A. N. Cave run by Mike A. Neumayer, 56, of Selden, who is a collector with more than 1 million cards and is running out of space at his home with cards stored in his basement, attic and garage.

Neumayer is a hard-core Mets fan who wears a Mets charm around his neck, has a personalized brick in front of the Citi Field rotunda and even annually buys limited edition wines from the private vineyard of legendary Mets pitcher Tom Seaver.

“I’m currently looking for a 1962 Mets yearbook, their first year, which can run $450 to $600 depending on condition,” says Neumayer. “One of my most precious possessions is my near-mint Tom Seaver rookie card from 1967, which was a gift from my wife.”

The current marketplace for baseball cards is at an all-time high with multiple generations collecting from grade school kids to senior citizens.

“When I started in the business 32 years ago, people said this was just a fad. It’s 2019 and that fad is still going,” says Jimmy Ryan, owner of JP’s Sports Collectibles in Deer Park. “Collectibles are purchased with secondary money when the economy is good, everybody is working and people are comfortable.”

“Years ago the rookie cards — the first card issued of a player — got hot,” says Ryan. “The big staples from every decade are Pete Rose, Nolan Ryan and Tom Seaver from the '60s and Robin Yount, Mike Schmidt and George Brett from the '70s. The new popular guys who sell well now are Mike Trout and Aaron Judge.”

Set-building is the name of the game in the baseball card business. Collectors will pick a year and focus on finding all the cards to complete a set.

Ryan says, “Some collectors like to purchase it all in one shot, while others could spend two years building a set week-by-week because they like the chase.”

“I’m obsessed with those. The 1967 Topps was my very first set, so I fell in love with it,” says Malamud. “I’ll go to shows and everybody will pull out their 1967s to show me what they have.”

“Grading is when they inspect the card, give it a grade 1-10 [low to high] and it gets encapsulated [in a holder] so it can’t be broken,” says Malamud. “It’s important to do because it enhances the value of the collection.”

A common pattern naturally forms among collectors in terms of a circular transfer of materials.

“Typically, people collect as kids. Then they get out of it, and so many come back at age 30 because they want to relive their childhood,” says Ryan. “Then when they retire, they move or downsize, therefore they no longer have room for collectibles, so they sell. That’s how stuff recycles back into this business.”

Visit the Cradle of Aviation Museum, more things to do this weekend on LI
Didn’t find what you were looking for?