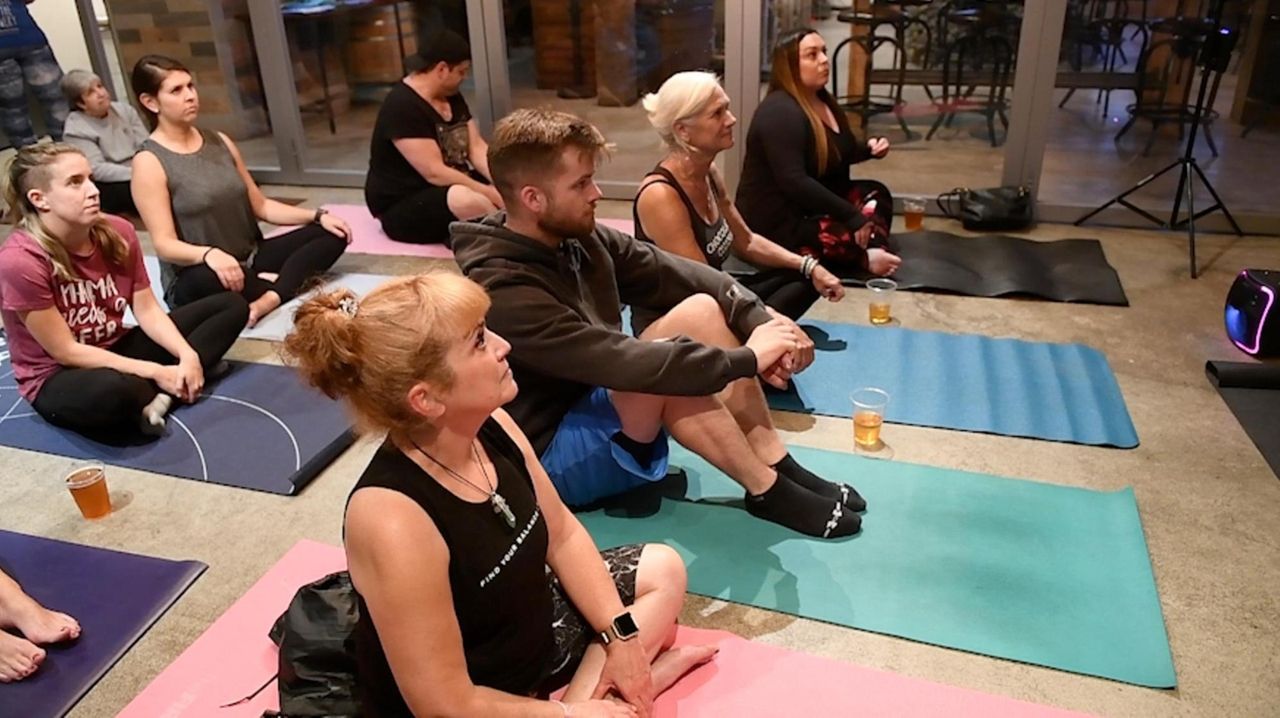 Beer Fit Club is a new way to incorporate exercise that normally might involve weights: The participants get to drink the beer afterward, though for some routines, beer “sipping” is done during the workout.   Credit: Newsday / Thomas A. Ferrara; Beerfitclub

Strength athlete Tom Flesher has a favorite thing to lift while exercising — a pint of beer.

“I've always enjoyed the pairing of beer and fitness,” says Flesher, 37, a Farmingdale resident and economics professor at Suffolk County Community College. “Over time, it's become a fun way to do exercise that's different from what I normally do.”

Flesher is not alone in hopping on the hops bandwagon when it comes to working out. He’s a regular at events given by the Beer Fit Club, which offers yoga at breweries around Long Island and at private events to make exercise “fun,” according to the program founder.   And, she says, as counterintuitive as it may sound, adding beer to exercise doesn’t have to lead to a beer gut. It can instill in people a thirst to become more fit.

WORKING OUT (WITH BEER)

Glasses of beer are incorporated into the exercises for some moves that normally might involve weights. Participants can drink the beer afterward though for some routines beer “sipping” is done during the workout. Class offerings include “Beer & Yoga,” the “Mindful Pintfull" for “mindful meditation,” the ballet-inspired “Barre at the Bar,” and a “Brewery Boot Camp” that uses kegs in the routine. An ugly sweater event is held at Christmastime. Most classes are $25.

Beer Fit Club founder Sophia Del Gigante started the club four years ago and says she got the idea after losing more than 70 pounds through Weight Watchers and visiting San Diego, California, and reading about the beer scene there.

“There were yoga classes at breweries, and as someone who lost 73 pounds I was looking for fitness to be more fun and accessible for people,” Del Gigante says. “I wanted to inspire other people to put fitness in their lives.” She adds, “With having the classes at a brewery and not a yoga studio, people aren’t scared of not being great at it. It’s important to me that everyone feels comfortable and a hundred percent welcome.”

Del Gigante says club participants are encouraged to become part of its community, which includes a Facebook group, a podcast and the “Beer Fit Challenge.” The challenges are done over a week — such as doing five minutes of meditation or doing 150 jumping jacks — the number of jumping jacks Del Gigante says it takes to burn off a pint of beer.

In the classes, wine can be substituted for beer, Del Gigante notes, but it’s beer that’s the focus of the program and what most of the participants drink.

“We think of ourselves as a fitness entertainment company by making fitness entertaining and opening people up to fitness so it’s part of their daily lives,” Del Gigante says. “They’re willing to try this because it looks good on Instagram, they can have fun with friends, and they get to drink a beer.”

Flesher says his wife, Katie Barbieri, 39, turned him on to the Beer Fitness Club and that they’ve been to more of its events than he can count.

“My wife enjoys doing yoga and found an event that she thought I'd enjoy, because I'm a big beer fan,” Flesher says. “It is crazy. But it's also an unbelievable amount of fun. I'm always impressed by how supportive the group and instructors are to people who, like me, might not have as much yoga experience but want to participate.”

Del Gigante says the classes are also a good fit for breweries, which benefit from the creation of new customers since Club participants sometimes end up hanging out at the brewery afterward.

What about drinking and driving?

“We haven’t had any problems,” Del Gigante says. She adds most breweries have nonalcoholic selections as well, which allow people under the drinking age or those not wanting alcohol to take classes.

Jessica Posillico, 33, a digital courseware sales representative and East Islip resident, says she heard about the Beer Fit Club from her sister.

“I liked the idea of bringing people together for fitness while making it fun in a laid-back atmosphere, like a brewery,” Posillico says. “I’m someone who appreciates yoga, but I don’t always feel like mine is the ‘yoga body type’ to walk into a traditional studio and take a class. But I am the type that walks into a brewery with no problem.”

0:42
Day in the Life of Long Island 2021
Long Island restaurants with luxe outdoor patios
1:52
Family-friendly theater productions to catch this summer
10 events, things to do this weekend on Long Island
The best ways to see the 'Strawberry Supermoon' on LI
New Greek takeout spot opens in St. James
Didn’t find what you were looking for?