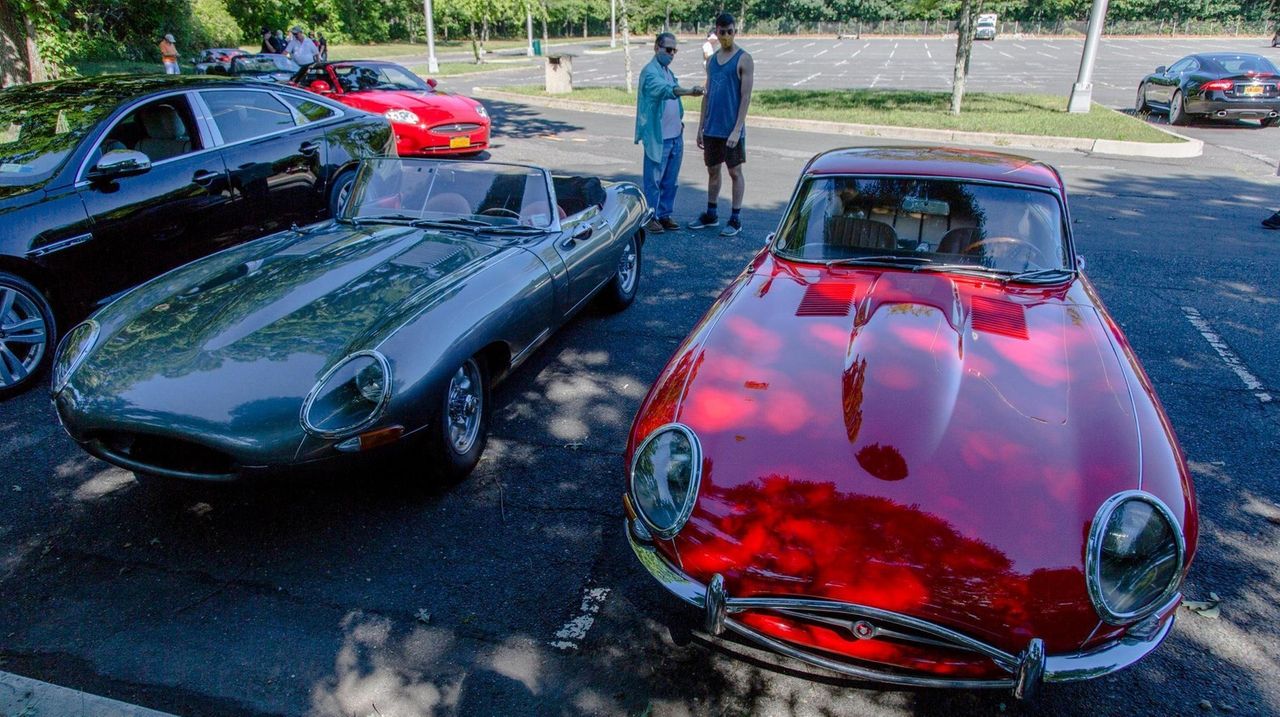 Corvette owner John DiBlasi says car shows have been affected by the coronavirus pandemic, but people have found other safe ways to meet and view automobiles. Other groups, including the Jaguar Drivers Club of Long Island, pictured, have been holding socially distant member-only meets. Credit: Kendall Rodriguez

COVID has canceled traditional car shows, but that hasn’t stopped gearheads from running their engines. Long Island car enthusiasts like to share their automotive pastime with the public. Here’s where four free, socially distant car meets are happening often:

Long Island Needs a Dragstrip is all about promoting motor sports in Suffolk County. Every Tuesday night, this group holds a cruise night at Our Lady of Mount Carmel in North Patchogue from 5 to 9 p.m.

"We get a mix of everything, it’s not just drag racing cars or hot rods. There’s imports, customs and even motorcycles," says committee member John Consoli, 35, of Coram. "People come to hang out, relax and enjoy their hobby."

The group doesn’t charge but accepts donations for the church’s food pantry. They are also working hard toward the goal of getting a dragstrip built on Long Island. "Automotive sports were born here. We had one of the very first four-lane wide dragstrips," says Consoli. "We want to bring a motor sports park back to Long Island."

The season runs through the Tuesday before Halloween (Oct. 27) where the last event concludes with a special "Trunk or Treat" night.

"People decorate their cars, kids come in costume and trick or treat among the cars," says Consoli. "It’s a real family environment."

Since car shows in the traditional sense aren’t happening, Patty Mancuso of Smithtown is bringing car shows to you. Her Smithtown Rolling Car Show, where specialty cars parade through a different neighborhood each time, has been running since the spring.

"I started doing it because of the quarantine. There were no car shows and we have all these nice cars," says Mancuso, who owns a 1981 Camaro Z28. "Working at home I was watching all these birthday parades go by and I was thinking, ‘It would be nice to see some cool cars.’ "

Mancuso, 53, organizes and promotes each event through the Nextdoor app. Her radius is Smithtown, Hauppauge, Commack, Dix Hills, East Northport and Kings Park. They are held appropriately every few weeks and she announces them five days before on the app and her Facebook page to make sure the weather is good.

"People appreciate it. They wave, say ‘thank you,’ plus take pictures and videos," she says. "It’s about spreading a little joy during a strange time. I’m just trying to get some smiles going."

One of the newest gatherings in the car community is That LI Car Meet in Farmingville where drivers gather in the parking lot of the old Kmart building every Saturday evening from 6 to 8:30 p.m.

"We accept everyone — motorcycles, trucks and cars," says organizer Michael Sinz, 21, of Ronkonkoma. "Every week there’s a different turnout." Attendees socialize from a distance.

"We always want to see new faces," says Sinz. "Everyone likes to walk around and meet the people who own the cars."

Sinz got excited when a 2017 Acura NSX recently made an appearance. "This is not a car you see every day," says Sinz. "To have one come to our meet was very exciting."

Early birds head to "Cars & Coffee" at the old Macy’s parking lot in Commack at sunrise on Sunday mornings until 11 a.m.

"It’s our outlet before we go about our week," says organizer Nick Ferraioli of Ronkonkoma. "It’s more about the camaraderie than anything else. The conversations over these cars are incredible."

The atmosphere is a family-friendly one with plenty of children in attendance.

While some auto organizations are more public, others are keeping to themselves during the pandemic. Many are going the “members only” route this fall.

The Jaguar Drivers Club of Long Island typically holds its annual car show, “Jaguar Invitational Concours d’Elegance,” on the weekend after Labor Day at the Vanderbilt Museum in Centerport, however, that was canceled this year. But, members will come together on Oct. 25 for an outdoor rally that runs from Melville to Northport Harbor.

“It’s a route everyone takes following preset instructions with questions along the way to answer. Whoever gets the most questions right ends up being the winner,” said club president Mike Carroll, who has a 1967 Jaguar E-Type as well as a 2007 Jaguar XK8. “It gives people a chance to get together and ride their cars.”

The Long Island Corvette Owners Association holds regular meetings on Zoom twice a month and unofficially gathers for a weekly outdoor socially distanced breakfast with their cars on Saturdays in Farmingdale.

“It’s basically social activities that revolve around the car,” says club vice president Tom Donato, who owns six Corvettes. “We all have Corvettes in common so there’s always something to talk about.”

On Oct. 23-25, the LICOA is doing a weekend getaway to Rhode Island with their Corvettes to tour the Newport Mansions and the Newport Car Museum.

“We all love the Corvette because it’s truly the American sports car,” says club president Ed Stichweh, who drives a 2005 C6 Corvette. “People are drawn to the heritage of the vehicle, which has been around for over 60 years and so has our club.”