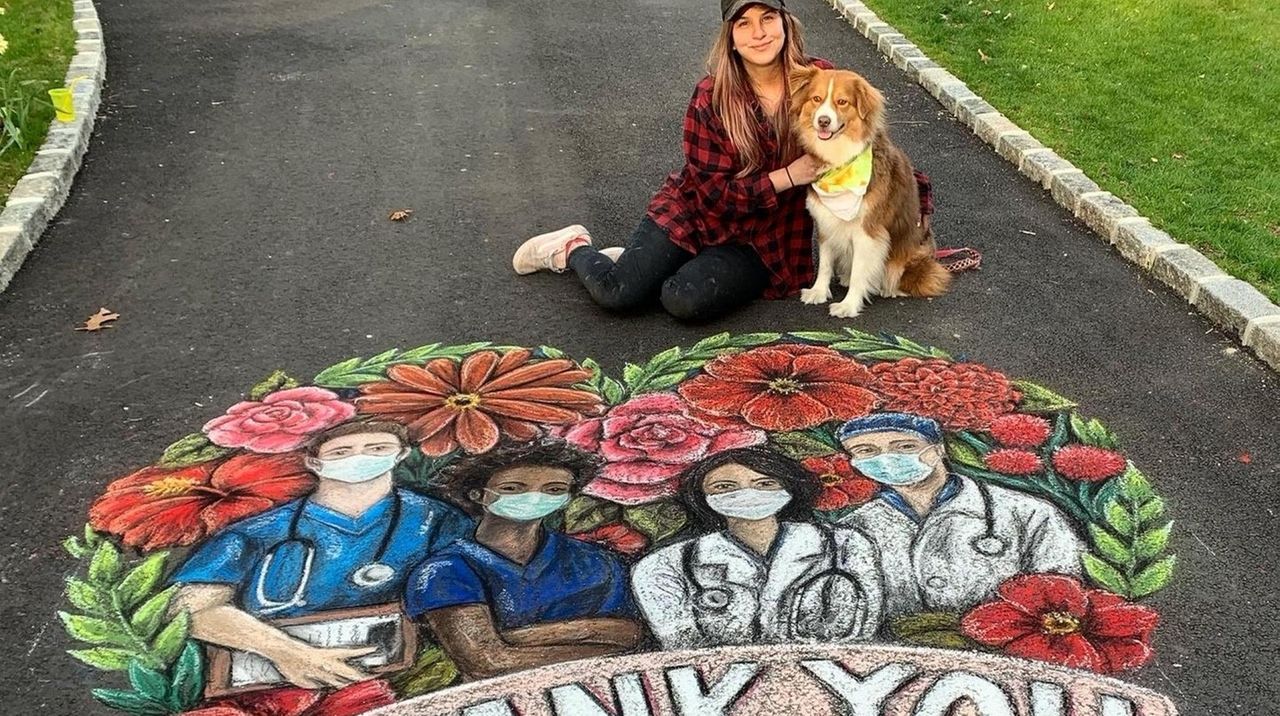 Kara Hoblin, 30, of Cutchogue draws a "thank you" to essential workers in her driveway in chalk. Credit: Kara Hoblin of Kara Bella Art

Chalk it up to talent.

Some amazing works of art have been popping up on driveways and sidewalks all over Long Island as some professional local artists join the “Chalk Your Walk” campaign. The grassroots movement is still going strong after being started worldwide during the first days of the pandemic lockdown to encourage the drawing of images outside homes to lift passersby's spirits.

Some of the "masterpieces" took about two hours to make from start to finish while other drawings took nearly a full day.

“I had seen this was sort of a trend that was picking up,” says one of the artists, Meredith Samuelson, 41, of Hewlett. She teaches art at a Brooklyn middle school. “I love drawing and being creative and I was looking for a project, so it felt like something I would love to contribute to. We’re all isolated but art is a way to connect to other people.” She drew a pair of colorful lovebirds and wrote the message, “Apart but together.”

It was a natural for Nate Kane, 17, to want to get in on the effort. The student at William Floyd High School in Mastic Beach comes from a family of artists. Included is his mother, Stephanie Schena, who has done special effects make up for independent films.

“Usually, I do portraits,” Kane explains. One of his chalk subjects was a man. “It was just a random model I found in a picture on my phone and I used some chalk from the dollar store.” He adds, “I saw some people in the news and on Facebook doing it, so I thought I’d do it — so many people come walking by the driveway, so I thought I could give them hope.”

A talent for art runs in the family of Jamie Bula, 38, as well. The Massapequa Park resident is an art teacher at the John F. Kennedy Middle School in Bethpage. The mother-of-two’s work is drawn largely to appeal to the younger crowd who are fans of such children’s favorites as "Paddington Bear," "Toy Story" and "Mary Poppins." Her daughter, Avery, 6, drew a picture of Snoopy to compliment Bula’s drawing of Charlie Brown and Lucy. Bula talks of using special chalk that’s creamy when used on paper to achieve more intense colors in her sidewalk art than just pastels.

“I feel like a connoisseur of sidewalk chalk,” Bula says. “I like doing it because they give people outside walking something to look at. Every time I think of not doing one now I think of the people walking by every day that are expecting to see them.”

Kara Hoblin, 30, of Cutchogue, says that as an artist she normally primarily works in chalk. She drew a tribute to health care workers though she is more known for doing more “nature-inspired” creations. She’s done mural-like chalk art for a permanent chalkboard wall inside the dining room at the First and South restaurant in Greenport.

“I do about eight a year and I’ve been doing it for years,” Hoblin says of her First and South drawings. “I’m inspired by what’s going on in the world.” She adds, “I did the health care workers drawing in mid-April just to say, ‘Thank You.’ I’m not on the front lines — my trade is an artist — so I thought the only thing I could do to help is draw.”