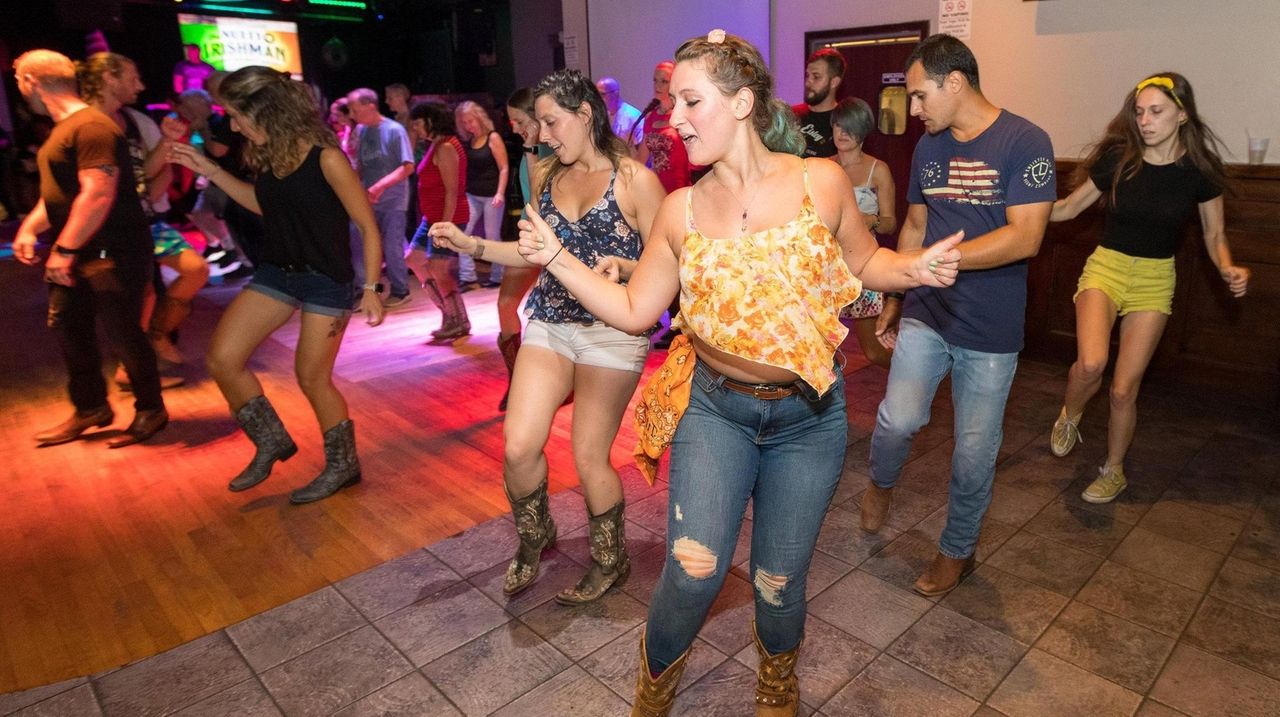 The Country music scene is alive and well on Long Island as different events are held weekly at places like The Nutty Irishman in Farmingdale, where they host Country Tuesdays. Credit: Barry Sloan

This might be the Northeast, but if you walk into the Nutty Irishman in Farmingdale on a Tuesday night, you would think the bar was located down South. Men and women are in jeans, plaid snap-down shirts, tank tops, Daisy Dukes and cowboy boots as they dance together across the wood floor. That’s right, Long Island has gone a little bit country.

"The country community is almost like the TV show ‘Cheers;’ you are welcome no matter who you are," says DJ Neil Wrangler, who spins at Nutty’s Country Tuesdays. "There’s a southern hospitality aura about it."

Long Island has become a hub for country music. In fact, the genre made up a third of the Jones Beach and Bald Hill concert rosters this past summer.

"Country artists are aware of how passionate the listeners are out here," says Phathead, program director and morning DJ at Long Island’s own My Country 96.1 FM [WJVC]. "Most of the country artists are from rural areas so the lyrical content in their songs lends itself to be connected to the suburbs rather than city locations."

WHY IS IT POPULAR?

Country music's draw is its inclusiveness. The age range of the crowd is quite vast going from 20 year-olds to senior citizens.

"We all mesh and intermingle. There’s no age barrier," says Brianna Sanzotta, 31, of Holbrook, who is a regular at Nutty’s Country Tuesdays. "It’s almost like a family event."

Part of this tight unity is due to the bonding activity of line dancing. At Country Tuesdays not only is it encouraged, there’s even free lessons offered on the open dance floor to welcome newcomers.

"You don’t have to know everything right off the bat," says Ryan Finlay, 31, of West Babylon who attends weekly with his girlfriend. "The crowd is filled with friendly people who are always willing to teach you a new dance."

Those seeking a country concert experience can head to Mulcahy’s Pub and Concert Hall in Wantagh, which has booked national headliners like Rodney Atkins, Easton Corbin, Hunter Hayes, LoCash, Drew Baldridge, Mitchell Tenpenny and Craig Morgan. One of the biggest draws at Mul’s is ZBTB, the Zac Brown Tribute Band, which has been packing the pub since 2013.

"Zac Brown’s music is so beachy. He’s almost like a country version of Jimmy Buffett," says ZBTB’s lead singer and acoustic guitarist Pete Frank. "The closer we get to the beach, the better we do."

Whenever ZBTB is in town, Emily Baron, 29, of North Babylon makes a point to be in the crowd.

"I love their vibe. ZBTB shows are always a guaranteed good time," she says. "It’s my therapy."

Alyssa Lindenmeier, 30, of Carle Place agrees, "The performers set the tone by being very fan interactive and really get the party going. The guys have such high energy on the stage that you will never see anybody sitting down."

Each December, My Country hosts a secret holiday show on Long Island where they give away and sell some tickets but the crowd doesn’t know who the headliner is until the artist arrives on stage. Past surprise guests included Darius Rucker, Dan + Shay, Maren Morris, Kacey Musgraves, Brett Young and Luke Combs.

"This year, we are going to have two secret holiday shows at Mulcahy’s on Dec. 1, featuring all female artists and Dec. 15, with all male artists," promises Phathead.

Another element of the country community's popularity is the fashion of it all. Go West! in Bohemia has been Long Island’s outpost for country attire for the past 24 years.

"We sell cowboy boots, hats, belts, buckles, shirts, bandannas — you name it," says owner Ellen McGarvey. "We even have spurs."

Sanzotta keeps it simple with a tank top, shorts and boots. "It's casual but comfortable," she says. "Makes it easy to dance in."

Finlay goes with a similar vibe donning a T-shirt, jeans and boots. "I can't do the cowboy hat," he admits. "I get too hot dancing."

Clearly boots are the most popular country items everyone wears. "We sell 200 different styles," says McGarvey. "Men typically like the square toes while ladies tend to go with a more pointed tip."

Once a month, Go West! teams up with next door neighbor Eleanor’s Lounge where they host an outdoor line dancing event with a live country band in the parking lot.

"Country fans come out in force every time," says Brandon Altman, co-owner of Eleanor’s Lounge, who also offers monthly country karaoke. "They are very lively, fully dressed and always looking to have a good time."

WHEN | WHERE 7-11 p.m. every Tuesday, The Nutty Irishman, 323 Main Street in Farmingdale

Long Island is developing a new country star - Dan Reardon. This 40 year-old singer/songwriter from Bayville has been taking weekend trips to Nashville to record his original songs, which are currently streaming on Spotify.

“Country music has a genuine quality to it,” says Reardon, who typically gigs at Spotlight in Huntington and Craft Kitchen and Tap House in Wantagh. “Whether the concept is simple or more profound, each song has a heartfelt story.”

Growing up he was raised on the music of Alabama, Alan Jackson, George Strait and Garth Brooks.