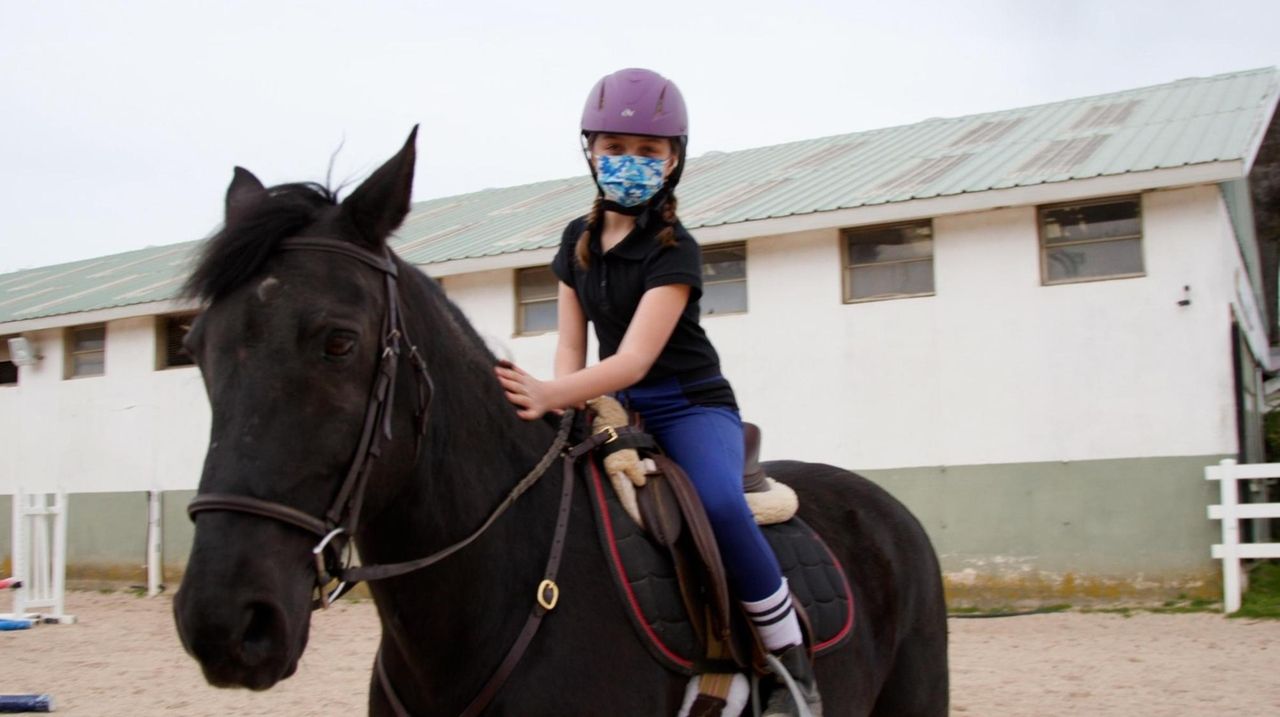 The Babylon Riding Center in West Babylon offers horseback riding lessons for beginners. Owner Vinny Russo, on April 25, said it's the perfect time for your children to start taking lessons now that the weather is starting to warm up. Credit: Kendall Rodriguez

By Arlene Gross Special to Newsday Updated May 18, 2021 5:00 AM
Print
fbShare Tweet Email

Though she learned how to ride horses in her 30s, Marci Gorenkoff gave up the sport to raise her children.

With her kids now grown, Gorenkoff, 62, of Woodbury, is back in the saddle, getting hands-on lessons at DDR Farm in Melville, where she’s learning not only how to ride, but also to care for horses.

"It’s better to learn when you’re young," advises Gorenkoff, who’s had to get beyond fears, but absolutely loves the sport.

"There is nothing like it," she says. "If I trot, I love how it feels to be moving on a horse and trying to learn its rhythm."

Adults first timers are way more fearful than children in general, says Diana Russo, owner of DDR Farm. "Things just don’t happen as easily for you when you take them up as an older person," she says. "For children, if they’re a little nervous, once that horse starts walking and they feel the rhythm of it, they get a smile on their face. It’s easy for them."

Anyone can learn to ride a horse, says Vinny Russo, owner of Babylon Riding Center in West Babylon.

"But the main factor is you can’t be afraid of the horse," he says.

Thus, Vinny prescribes getting to know a horse up close before actually going out to ride it.

"If you have no fear factor, you get on a horse and you can ride a lot faster than somebody that has just a little fear in them," he explains.

Once riders become proficient, there’s a seamless connection between horse and rider, he says.

"When you’re on a horse and you know what you’re doing, you’re actually part of the horse."

Vinny generally recommends lessons for children no younger than six years of age, unless they’ve been doing other activities, such as dance or music lessons, which generally indicates that they have greater attention spans.

Some parents want their kids to start as young as four years old, he notes.

"I tell them, I believe they’re too young, but come down, we’ll start with a pony ride and I’ll see," he says. "Some children comprehend quickly, and some kids don’t."

Riding is just a small part of the relationship with the horse, says Diana.

"A lot of our program we do spend a lot of time on the ground and give a lot of information about horse behavior, how to relate to your horse and grooming is part of that," she says, adding, "It’s a really important bonding experience."

The first half of a 30-minute private lesson for a child at the Babylon center starts on the ground with an instructor in a grooming stall, letting the child get up close, touching and brushing the horse or pony. For an adult, Russo advises an hourlong lesson, following the same game plan.

"They get to see that a horse shaking his head or stamping his foot, swishing his tail is all something that a horse does naturally and I believe it takes care of a lot of the fear factor," he says.

The second half of the lesson entails a formal riding lesson in the indoor arena.

"Once they have a lot of the basics down, and they have balance and they can control the horse, then we suggest maybe going into a class where there’s anywhere from four to six people in the class," Vinny says.

There are two basic riding styles: English and Western.

Developed to chase foxes, English style riding entails saddles that are lighter and built for speed, Diana explains. Western saddles, which have a horn for a cowboy to hang a rope on, were developed for long hours of cattle work.

"You have to get your balance very independent of the equipment. It’s basically you and your horse very close together," she says.

DDR recommends learning English style first, to establish a sense of balance on the horse, and then switching over to Western, for slow paced, leisurely riding.

DRESSING THE PART: Gear to Get

"We recommend trying to avoid sneakers because you need a little bit of a heel, so your foot doesn’t go all the way through the stirrup," she says.

Once people commit to riding, DDR will send them to a tack shop to purchase paddock boots and an approved riding helmet — which is different from a bicycle helmet.

For entry-level riding you don’t need much else, other than some grooming brushes, Diana says.

And, it takes no time at all to become proficient at the sport, notes Vinny: Becoming a pleasure rider, where you can control the horse and comfortably trot along, typically takes about 20 lessons.

Here are a sampling of the many riding centers in Nassau and Suffolk.