All colleges promise to equip their students with tools to succeed. For Richard Daly, Johnson & Wales University did just that — with a chisel and chain saw.

It was there that Daly was first introduced to a chain saw, die grinder, sander, chisel and blowtorch as a culinary student in 2000 during his sophomore year of college. His instructor had taught him how to use the tools in a more advanced way and tasked him with creating an ice sculpture for a buffet centerpiece. Despite the sharp learning curve, six months later Daly was competing in carving competitions at the collegiate level.

Daly’s interest in ice sculpting never thawed. The Mastic Beach resident used his undergraduate experiences to carve a career path — and gain international recognition. Daly, 37, holds the Guinness World Record title of World’s Fastest Ice Carver — a distinction he earned in 2013 when, in just two hours, 52 minutes and 12 seconds, he created 60 sculptures using 18,000 pounds of ice. He shattered the previous record of 4 hours, 22 minutes and 55 seconds that had stood for more than a decade.

“The record was previously broken by my predecessor when I was first learning how to carve and I thought it was just an amazing feat and wondered how anyone would ever be able to beat such a crazy record,” Daly says. He spent a year preparing to have his expertise measured by a Guinness adjudicator. 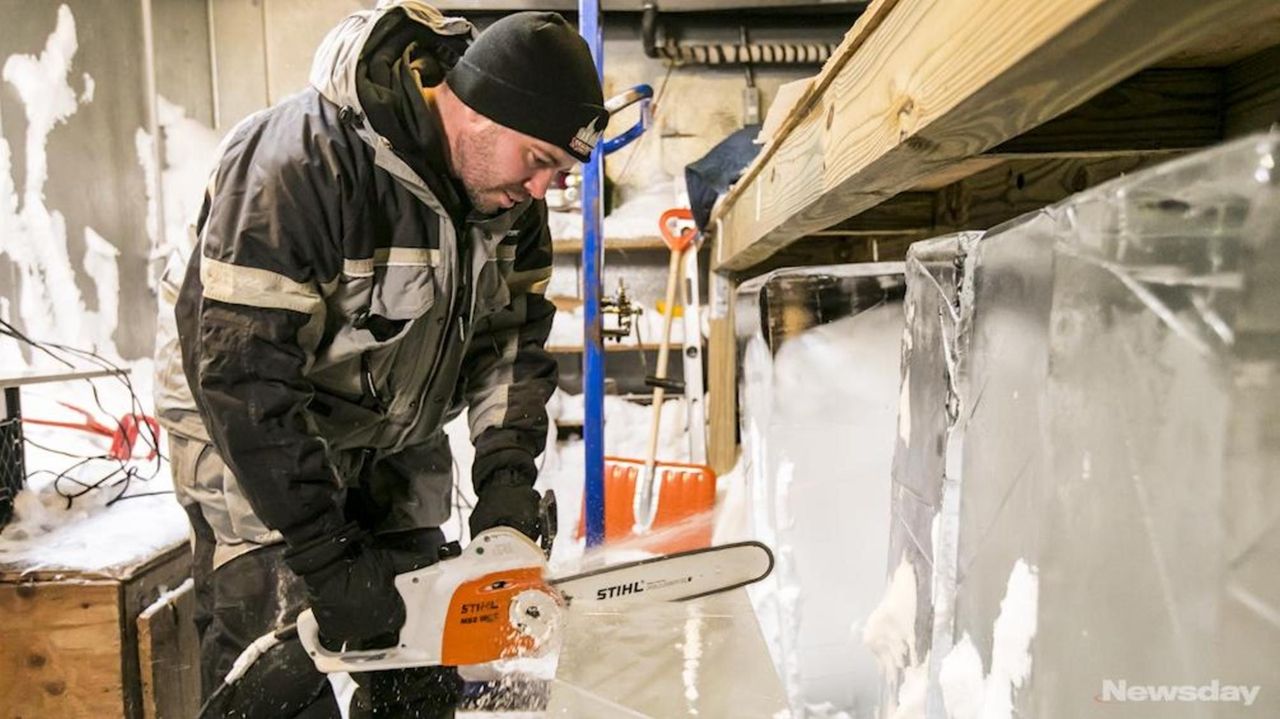 In the past decade, Daly, a culinary arts teacher at William Floyd High School, has won more than 200 ice carving competitions across the country and scored 10 gold medals at the U.S. National Ice Carving Championship. He has titles from the 2015 and 2016 events.

On Long Island, ice is always in season. While enrolled in culinary school, learning to carve, Daly said ice sculpting businesses were in short supply. In 2003, he launched Ice Melodies to fit the mold, servicing Long Island, Queens and Manhattan.

“It is a consistent business throughout the year, it just changes from weddings to private events to live demonstrations and competitions,” Daly says.

Daly operates the company out of his home — specifically, a 16-foot-by-18-foot freezer. Plying his craft in the frigid air required to keep 300-pound blocks of ice from turning into big puddles, he wears a heavy-duty ski suit, wool hat and thick gloves. Many of the carvings he is commissioned for, however, are done on-site at catering halls for weddings or as part of larger demonstrations for other private and corporate events.

“We turn many of our sculptures into luges, so the beauty of the sculpture also becomes functional and tons of fun,” Daly says.

Luges, which feature added trails where alcohol or other liquids are poured, start at $95 and ice sculptures at $185. Cost is determined by the amount of ice and time a sculpture requires and the distance for delivery. A heart-shaped design (usually 40 inches tall and 20 inches wide) delivered anywhere in central Suffolk County would cost about $250. Daly handles all of the carving for Ice Melodies but is in the process of upgrading to a computerized carving process to increase production.

Daly’s success in speed sculpting is what led him to contact Guinness. For several years, after starting Ice Melodies, he debated doing so.

“Everyone thought I was nuts,” he says. “I knew it would be a ton of work and it took about a year of planning to figure it out.” It also demanded about 200 hours of modifying chain saws, sharpening blades and designing templates of everything from heart shapes to ice cream cones to submit to the Guinness team ahead of his test. All told, he spent upward of $10,000 readying himself for the challenge, most of it to cover the adjudicator’s expenses.

“Once the 18,000 pounds of ice was being unloaded from the truck, I wondered if I was in over my head,” Daly says. “On paper, I believed I could beat the record by 30 minutes if everything went smooth and, in particular, I didn’t get hurt in the process.”

Come carving time, Daly quieted his critics and took comfort in having paid little attention to his cold feet.

“I never in my wildest dreams believed that I would smash the record by 90 minutes,” Daly says.

LIer's Guinness marshmallow art on 'GMA'Towering over the crowd, Andy Gertler's marshmallow mosaic was finally completed after eight hours of ...