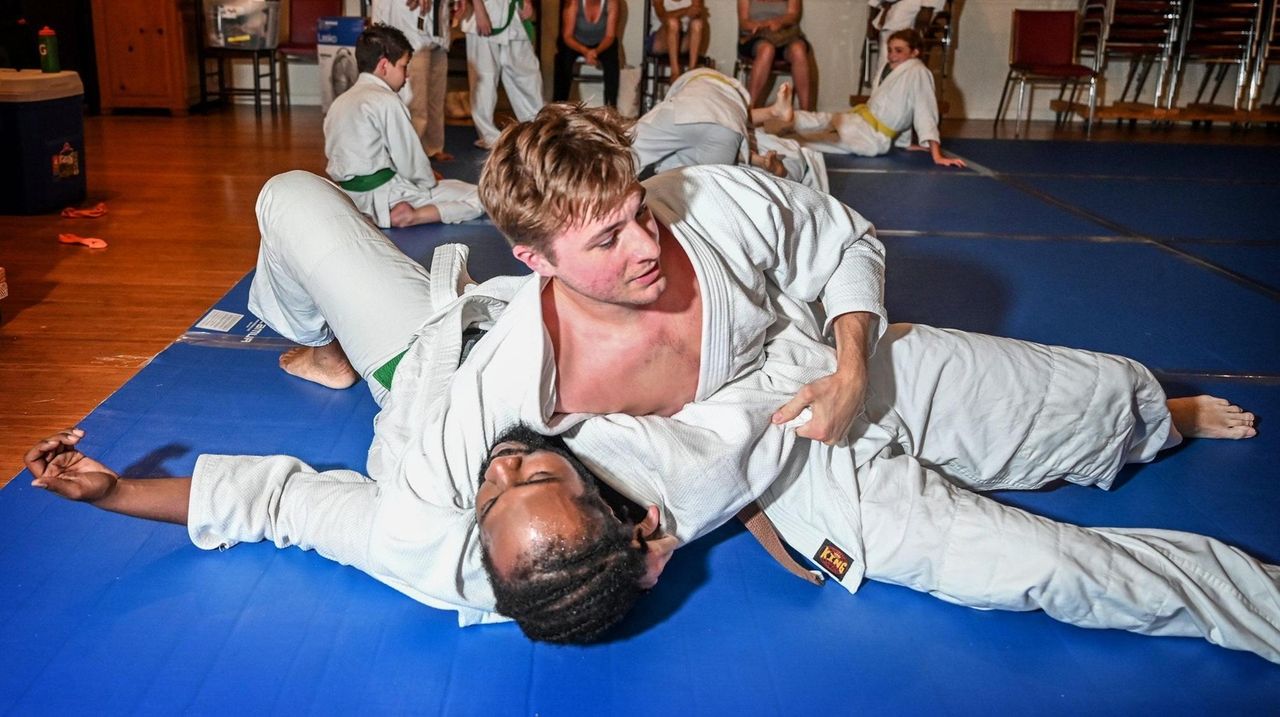 We visited Long Island Bujutsu Academy in Bay Shore to see what judo is all about, the importance and meaning to local groups as the Olympics begin in Japan.  Credit: Newsday / Thomas A. Ferrara

When it comes to martial arts, very often people immediately think karate. However, one of the most popular is judo. Taken from jiu-jitsu, judo means "the gentle way." Imagine karate without the kicks and punches.

This summer, one of the most anticipated competitions at the Olympics will be the judo bouts in Tokyo, the city where the sport was born.

"Make no mistake, the Japanese take this very seriously. This is their game," says Smithtown Judo owner Sensei John Lucas, who is a 6th-degree black belt. "The Japanese players have some of the best judo techniques in the world. The Kodokan in Tokyo, where the bouts will be held, is the worldwide temple for judo."

The biggest contender at the Olympics this year will be the Japanese team featuring stars like Shohei Ono and Uta Abe. "Judo in Japan is like basketball here in the U.S.," says Smithtown Judo instructor Jason Brodsky, 48, of Smithtown. "The sport is built into the culture."

Judo was created by Jigoro Kano in 1882 when he founded Kodokan Judo. He brought the sport to all schools of Japan and became the first Asian member of the International Olympic Committee; the sport debuted at the Olympics in 1964.

"Dr. Kano was a small guy who figured out a way to defeat larger opponents by using their own force against them. Judo is more of a grappling art. The goal is to control your opponent and take them to the ground," says Sensei Robert Geick, owner of Long Island Bujutsu Academy in Bay Shore and a 3rd-degree black belt. "There are no real strikes in the sport of judo. You can win on a perfect throw or go for a submission with an arm bar, a choke or a hold down."

Over the past 57 years, the United States has garnered success in judo at the Olympics. In 1964, Jim Bregman of Virginia took the bronze in the first year the sport was offered. More recently, the big judo stars in the U.S. have been women. Ronda Rousey of California became the first woman in the country to win an Olympic medal for judo when she captured the bronze in 2008. Meanwhile Kayla Harrison of Ohio also made history by winning two Olympic gold medals for judo in 2012 and 2016.

"Kayla is an amazing individual who has come through such hardships and has a great attitude," says SenseiDoc Watson, owner of Arigatai Dojo in Manorville and a 3rd-degree black belt. "To make it to her level is unprecedented."

Geick adds, "I’ve been seeing more women get involved in the sport because of Ronda and Kayla. I’ll bring a projector into class to show them doing moves and the girls get so excited."

"If anyone has a shot at medaling, it is Angelica, but she would need to have a good day," says Brodsky.

Smithtown Judo instructor Joe Prizzi, 61, of Coram noted, "Angelica is on a roll as she just captured a silver medal at the Pan American Judo Championships earlier this year."

"When you watch them fight, you’ll see a lot of the traditional throws done in completely different ways," says Washington, a green belt student at Long Island Bujutsu Academy in Bay Shore who is named after the Hollywood actor. "It opens up your mind to all the various moves you can learn, which is extremely inspiring."

Thanks to modern technology, judo fans won’t have to get up at all crazy hours to battle the 13-hour time difference to catch the Olympic bouts in Tokyo as NBC will offer coverage of each mat via streaming.

"I’ll watch it before and after practice," says André Boxwill, 44, of Huntington, who is a brown belt at Long Island Bujutsu. "There’s always something to learn."

Green belt student at Arigatai Dojo Brendan O’Reilly, 35, of Eastport claims, "When you see judo performed at its peak form at the Olympics it makes you double down on your practice and be the best player you can be."

If you become inspired by watching judo at the Olympics, get active by finding your focus at one of these Long Island dojos: