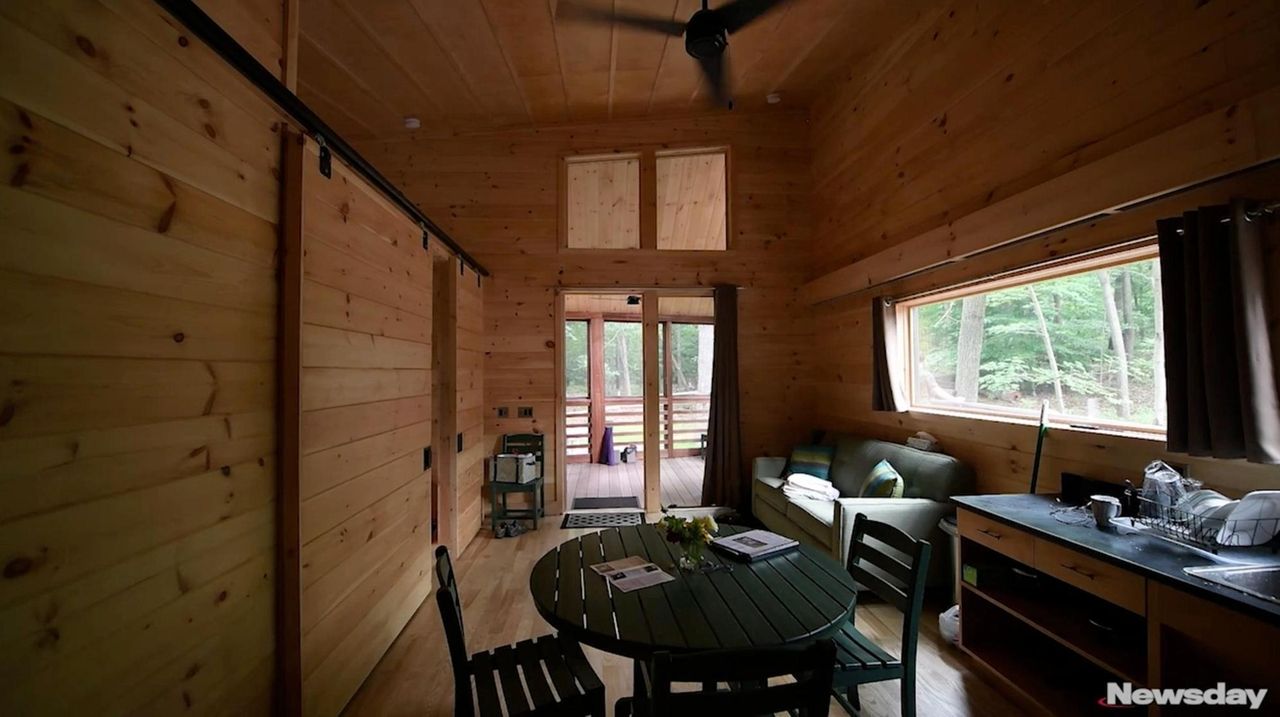 "Glamping," or glamorous camping, is a new trend that is spreading to parts of Long Island.  Credit: J. Conrad Williams Jr. and Raychel Brightman

Linda Loewenthal, of Brooklyn, and her family thoroughly enjoyed their recent vacation on the campgrounds of Wildwood State Park in Wading River.

But there was no pitching tents, making fires to cook meals or sleeping on the ground. Instead, for a week they rented one of the park’s new luxury cabins that came with all the comforts of home such as bedrooms, a fully stocked kitchen, a bathroom and a large, screened-in porch.

“That would not be happening, that’s not appealing at all,” Loewenthal says of a traditional camping experience. “I don’t like the idea of sleeping on the ground, and I can imagine what the food would be like having to cook over a fire.”

Her family is part of a growing number of people who want to spend time relaxing and being one with nature — but only if there’s no roughing it involved. What makes them happy campers is “glamping” — glamorous camping. It’s a fast-growing trend worldwide that has Long Island expanding its camping offerings.

And on Long Island "glamping" has really taken off during this year’s camping season. The new accommodations include stunning cottages at Wildwood State Park on Long Island Sound, and others expected to be completed by Labor Day weekend at Heckscher State Park on the Great South Bay. Luxury tents are expected to be available at Cedar Point County Park in East Hampton by next summer.

“Word has gotten out [about Wildwood] and reservations have skyrocketed,” says George Gorman, Long Island deputy regional director for the state parks department. He says those cabins are booked for the weekends through fall.

John Romfo, chief executive officer of glamping.com, says the website started in 2014 when "glamping" began to really catch fire, and it continues to grow in popularity. ''Traffic to our site is up 25 percent [year over year], and we have seen this same growth rate every year over the last four years,'' he says.

Romfo says "glamping" is nothing new; it’s just new to a lot of people. He notes the concept started in Africa in the early 1900s when  British and  U.S. tourists began traveling to on luxurious safaris with sumptuous meals, fine wines and other creature comforts brought from home to their tents in Nairobi, Kenya.

“'Glamping' is a way to experience the great outdoors without sacrificing luxury,” Romfo says. “It is camping without inconveniences, or discomforts.” He adds that "glamping" has been popular in the United Kingdom for more than 60 years, but only caught on in the United States and Canada “10 to 15” years ago.

Rebecca Martin, chief executive officer and co-founder of Brooklyn-based Terra Glamping, attributes the widening interest in "glamping" to people wanting to get away from the stresses of today’s high-tech world and pamper themselves in the process. Some of these accommodations don’t have Wi-Fi or television to allow guests to completely unplug, while others throughout the world can feature such luxuries as chefs, butlers and area rugs on wood floors.

“We’ve come to an age where we’re so connected all the time, so there’s the comfort, luxury and disconnection angle” to the trend, Martin says. In the tents there’ll be no Wi-Fi or television.

Romfo says "glamping" is most popular among millennials, baby boomers and families with kids between the ages of 6 and 12.

Linda Loewenthal, 54, is a literary agent and vacationed at Wildwood park in early August with her husband, Eric Boorstyn, 55, and their son, Sam Boorstyn, 20. None of them had ever done traditional camping.

“It wouldn’t occur to us as a family vacation,” Eric Boorstyn, an architect, says of camping. He says he read about Wildwood cottages and they were appealing because they were “more homelike” and could give him a taste of yesteryear . “I came to Wading River as a kid and it’s nostalgic to be driving the same roads.”

During their vacation the family made trips to Greenport and Orient Point “enjoying the community around us,” Boorstyn says.

What do the purists think of the Boorstyn breed of “campers?”

“The cottages are nice, but that’s not camping," says John Lucas, 50, a service technician and Holbrook resident who had pitched a tent and was spending five days at Wildwood State Park with his 13-year-old daughter, Julianna, and three of her girlfriends. “You’re basically in a house.”

INFO $175 a night to $250 a night, with minimum two-night stay through Thanksgiving Day weekend, parks.ny.gov

INFO $225 a night to $320, with minimum two-night stay through Thanksgiving Day weekend, parks.ny.gov; reservations may be made at reserveamerica.com

3 LI restaurants to try this weekend
LI drive-in, outdoor movie and concert schedule for summer
New seafood spot opens in Bayville
Family carnivals are back: Put these dates in your calendar
New LI dessert spot serves coffee imprinted with your photo
Didn’t find what you were looking for?