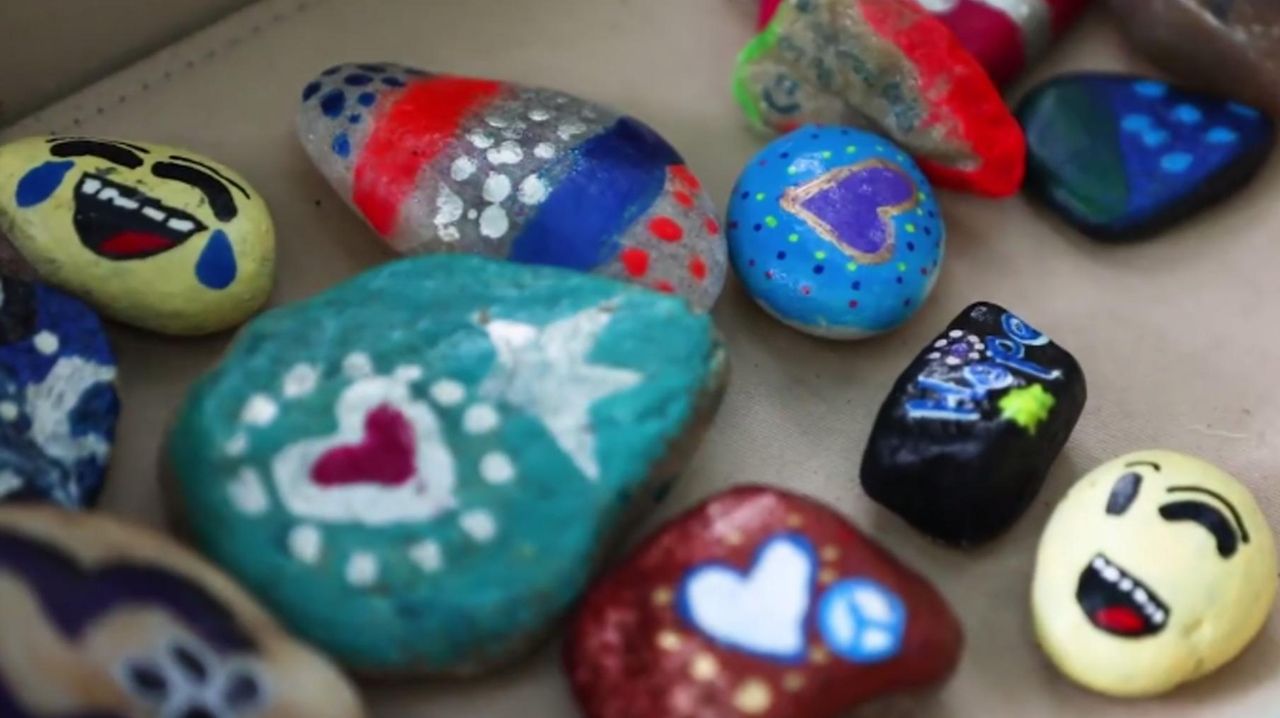 On Wednesday, Aug. 2, 2017, Brandy Lima and her two children, Jasper and Bridget, visited Avalon Park and Preserve in Stony Brook with a box of colorful rocks they had painted. They spent the afternoon carefully placing the rocks around the park with the intention of bringing happiness to those who stumble upon them.  Credit: Newsday / Marcus Villagran

A new craze has Long Islanders painting rocks and “hiding” them in plain sight in parks, shopping malls and playgrounds for others to come upon accidentally. It’s this summer’s version of Pokemon GO! — but while that fad had kids and grown-ups using smartphones to search for augmented reality characters, the painted-rock hunt is for something more primitive, concrete and reality based.

Participants are decorating plain old, garden-variety rocks, most of them the size of a palm, with colorful, uplifting pictures and sayings — think rainbows, hearts and strawberries — and Zen words such as “Love” or “Relax.”

“I’m addicted to it,” says Geri Petrizzo of Deer Park. She didn’t want to divulge her age but did say she has a 25-year-old son who has planted some of hers at Niagara Falls. “It’s like a soothing therapy for me,” Petrizzo says. She estimates she’s painted more than 300.

Painters learn who has found some of their rocks because there is an online aspect to the game — painters add a hashtag with the name of a Facebook painted rock group on the back of their rocks, and finders are encouraged to post their photo with the rock on the page. Then they can keep the rock, leave it where it is or hide it somewhere else for another person to stumble upon. Painters also post vague hints about where they’ve hidden rocks, such as a street sign or a park entrance sign.

Long Island groups include #LongIslandRocks, #SuffolkCountyRocks, #FarmingdaleRocks, #BayShoreRocks and so on. “I was inspired to start it by a friend in Washington State,” says Paul Kearney of Islip, who founded #LongIslandRocks, which has grown to 850 members. “It’s just the simplicity of it, that’s what’s cool about it. Kindness is easy. There’s nothing like seeing a post with a smiling kid who found a rock.”

Jasper Lima, 5, of Smithtown, found his first rock in Avalon Park and Preserve in Stony Brook, when he and his sister, Bridget, 9, and their mother, Brandy, were returning from a hike. It was painted with a purple outline of a heart and a paw print.

“I probably would have left it there thinking that someone had dropped it,” Brandy Lima says. “We turned it over and it had the little hashtag on there, LongIslandRocks. My kids were super thrilled, so excited. It took me a while to figure out how to post it on their page.” They’ve since painted and hidden dozens of their own rocks at the preserve.

Isabella Stephen, 7, of Ridge, found her first rock at the Holtsville Ecology Center. “Right before the goats,” says Isabella’s mom, Donna Paez. It said, “Positive Attitude.” Isabella wanted to get into the act. “I like painting,” Isabella says. So the family covered the dining room table with newspapers and Isabella, Julian, 3, Paez and her husband, Martin, painted together. “It was actually quite relaxing,” Martin says. “I made a pumpkin. And a chicken.” He added, joking: “Nobody would recognize it as a chicken, but I knew it was a chicken.”

Some local and national businesses are also getting involved. The Crafter’s Table in St. James, for instance, hosted a free rock-painting event in July that drew about 50 people, says owner Anne Carlin. Crayola launched a Rock Painting Set for $19.99 on its website on July 19; it will be in stores next month. And on Aug. 9 Michaels stores — which sell rocks and craft supplies — announced that the company has partnered with The Kindness Rocks Project, which is credited with starting the whole movement, in an effort to log photos of 1 million painted rocks at michaels.com rockchallenge.

Lina Enoch, 45, of Merrick, who started #MerrickRocks this summer, recommends that painters use acrylic paint, fine-tipped paint pens for detailing and a clear sealer so the paint doesn’t wash off out in the elements. “For me, as an adult doing it, I especially like the messages, painting, ‘You are loved’ or ‘You are not alone,’” Enoch says. “I do it as a pay-it-forward, spread-the-joy kind of thing.”