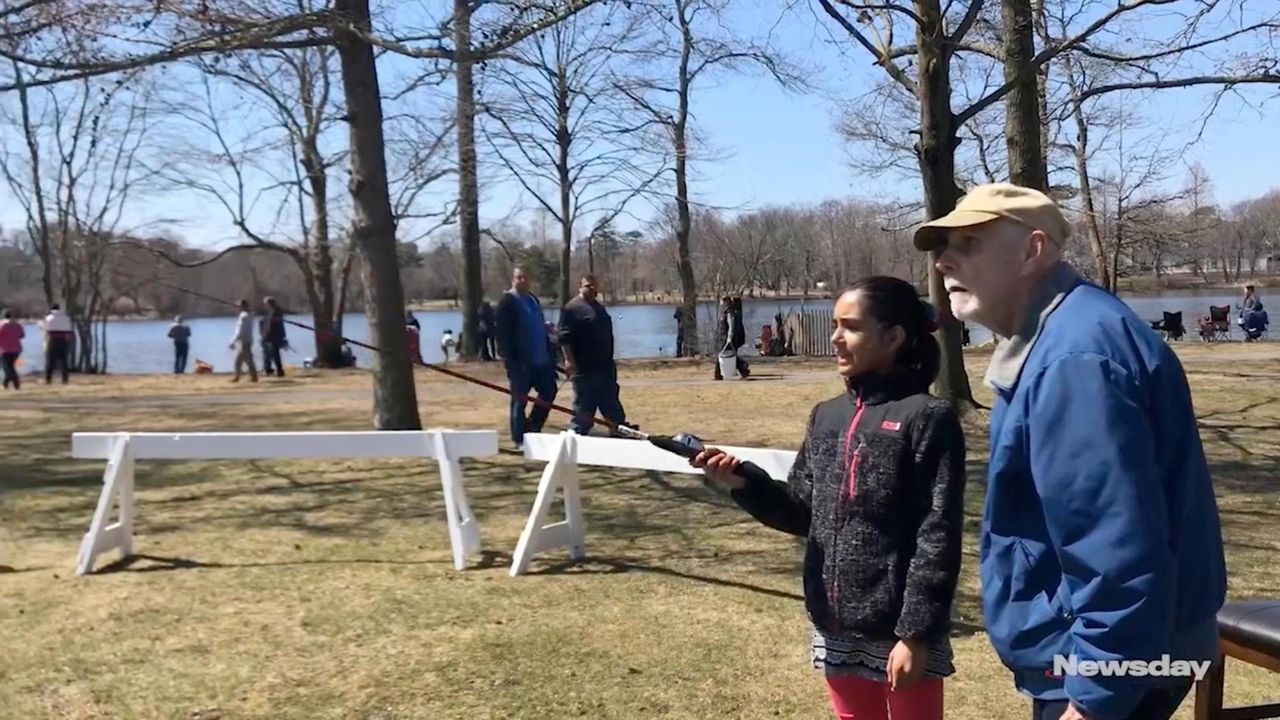 Long Islanders busted out of their winter confines Saturday, throwing off their heavy coats and celebrating the coming of warmer weather.

Many of the cars cruising along Hempstead Turnpike had their windows down. Adventureland amusement park in Farmingdale was whirring like a giant windup toy.

You could almost hear spring in the air — like a song of hope whispering in your ear, calling you out to do something daring.

Temperatures on the first Saturday of April reached more than 60 degrees under an umbrella sky of the bluest blue.

Here are some ways Long Islanders spent the day:

Donning his khaki Bermuda shorts, Peter Grawehr of Bellmore really wanted to get his wife and three boys out of the house. When he was a kid, his parents used to take him to boat shows and let him play on the vessels.

So that's what he did Saturday, taking the family to the Long Island Boat Show at the NYCB Live’s Nassau Coliseum. And they had a ball.

The 13-year-old twins, Quin and Rowan, hopped aboard a long white Edgewater 262CX and started treating it as their fort. Quin went exploring in the compartments down below in the 26-footer.

Rowan was fascinated that the boat builders could get a bathroom into such a small space.

Grawehr, 45, wasn't even looking to buy a boat. His wife, he noted, gets seasick "in the worst way."

The family had its sights set on the warm season ahead. Grawehr's wife, Colleen Fitzpatrick, had already started her gardening, trimming the apple tree and weeding the beds where she will plant her vegetables.

Fitzpatrick, 45, said she's hoping the family gets lucky in this year's lottery to get a cabana at Nickerson Beach Park.

The boys are itching to toss around a baseball and football.

Rowan can't wait for the family summer vacation to the Outer Banks in North Carolina. He loves the beach.

"I take after my mother," he said.

She's a schoolteacher, so she will have lots of the time this summer to spend with the boys.

Stepping out against cancer

Clearing skies and springtime sunshine welcomed breast cancer survivors and their allies to Bethpage State Park on Saturday morning to share their hope and courage in battling the disease that annually claims so many women on Long Island.

“Sometimes, you just have to tough it out,” said Anne Marie Allocca, 62, of Valley Stream, describing the radiation burns she endured — that she refused to let derail a family vacation — after she was diagnosed 17 years ago.

Though she has been in remission since undergoing surgery and chemotherapy, Allocca knows a recurrence remains a risk, recalling a friend’s mother whose cancer returned after 25 years. “That’s what I’m afraid of,” she said, noting she has yearly mammograms done where she learns the results the same day.

To the recently diagnosed and treated, including Jenni Cherlin, 37, a native who is moving back to Long Island, Allocca advised: “I guess I would tuck it in the back of your mind; it could come back, they say, so you have got to just keep going to the doctor, going for your checkups — and please, do not forget your mammograms.”

Cherlin, before setting out on the 5K walk organized by the nonprofit Lean On Me, said: “I’m cancer-free now — and a little tired.”

Cherlin found that a “cold cap” helped keep her hair from falling out during chemo. She has raised $2,000 so someone less fortunate can benefit from the device, which can cost about $500 a month.

Cherlin’s experience illustrates some of the pitfalls patients face; after finding a lump on her birthday, May 26, 2018, she learned her insurer deemed her too young to pay for a mammogram, so she turned to Planned Parenthood for help.

Still hoping to start a family, she and her husband, now living in Philadelphia, had two embryos frozen before undergoing chemotherapy, which can block fertility.

“Most people in this day and age, they do survive.”

Teach a kid to fish …

Al Winckler watched as Kristina Dahal held her first fishing pole, swung it back and cast her line 25 feet into the grass at Belmont Lake State Park in Babylon Town on Saturday.

He had shown her how to cast just minutes earlier, reminding the 10-year-old to flick her wrist as she flung the pole forward. But after just a couple tries, Winckler’s son, who was busy helping a toddler reel in his line, remarked that the girl was “a natural.”

Over the past 10 years, Winckler and his son, Steven Winckler, have taught probably hundreds of children how to fish at the Spring Family Freshwater Fishing Festival. It’s they both look forward to, said Steven Winckler, who drove down from his home in Saratoga for the event.

“We enjoy seeing the kids who have never held a pole before,” Steven Winckler said. “When they figure out how to do it, they get so excited.”

New York State Department of Environmental Conservation staff lent poles to the new fishermen and handed them cups with fresh bait. Hundreds of families surrounded the lake, hoping to catch one of the 4,500 brown and rainbow trout that the department had stocked the lake with for the free-fishing day.

License requirements were suspended for freshwater fishing for the day, according to DEC Regional Fisheries Manager Heidi O’Riordan.

Mackenzie and Ava Chiarulli, ages 7 and 5, of Sayville had spent hours at the lake waiting for a nibble and were still confident they would catch something by the end of the day. They were more optimistic than their mother, Debbie Chiarulli, who lounged in a lawn chair nearby and enjoyed the warm weather.

“The only one who seems to be catching anything’s the birds,” she said, moments after an osprey had dived into the water.

The sisters reeled in their lines and one after the other got them tangled in the branches above them, giggling as their father, Eric Chiarulli, cut them down.