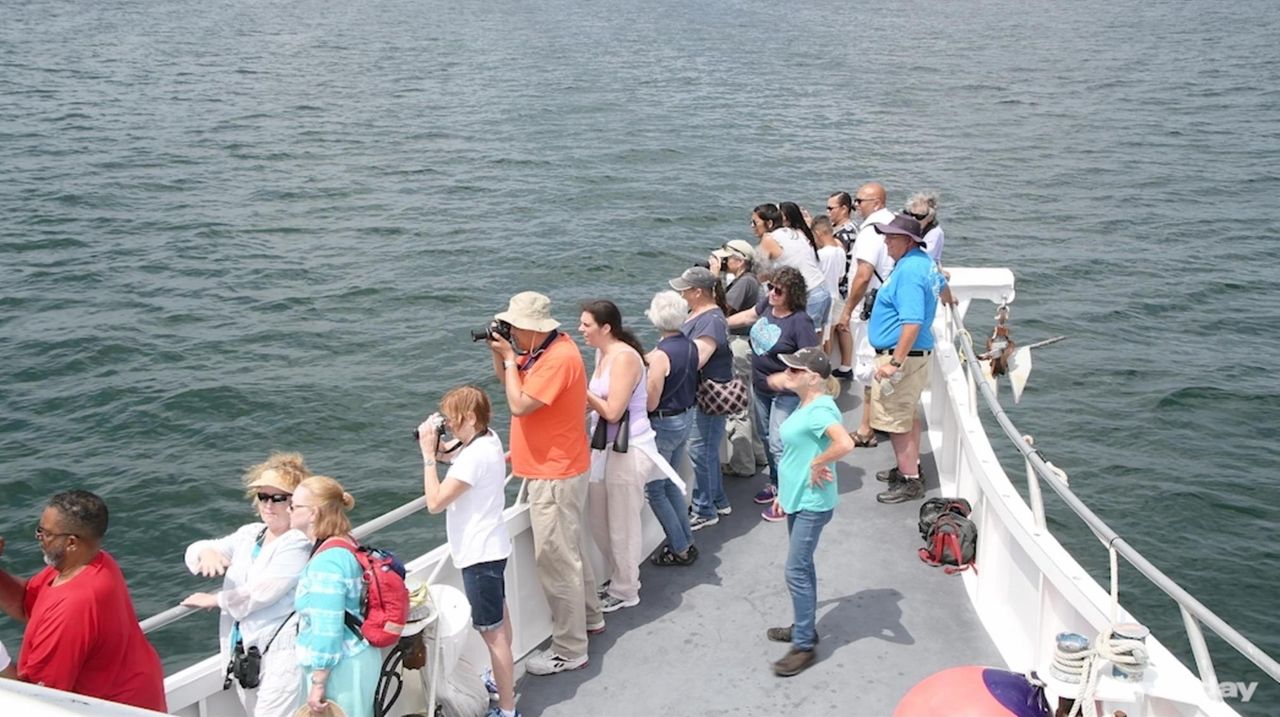 Long Islanders looking to see a humpback whale or bottlenose dolphin this summer can head out with the Captain Lou Fleet into the waters off Freeport to take an adventure cruise. Credit: Newsday / J. Conrad Williams Jr.

“I’ve never seen a whale in action in the sea, and I’ve only seen dolphins in an aquarium,” Gonzalez, 17, of Farmingdale, marveled aboard the Captain Lou Fleet’s maiden whale-watching cruise of the season earlier this month from Freeport’s Nautical Mile.

Gonzalez, her brother, Sebastian, 6, and their mother, Heidy Vallejo, watched from the deck as dozens of bottlenose dolphins swam in twos and threes around the boat.

“Dolphins in the area usually means there are humpback whales nearby,” said Thomas Bunting, 53, of Bellmore, the onboard naturalist.

And sure enough — within minutes — a humpback whale was breaching 10 feet from the starboard side. The humpback, which boat captain Nick Dionisio estimated to be 35 to 45 feet long, spouted, then gracefully slid back into the depths — but not before flipping its flukes straight up in the air.

As cheers were heard from the 61 passengers on board and cameras captured the very Instagrammable moment, Sebastian smiled and said: “This is better than Sea World.”

Montauk has traditionally been the main port of destination for whale watches in the ocean waters off Long Island. The Coastal Research and Education Society of Long Island (CRESLI), an educational, research and conservation group, has been offering the cruises for three decades. This summer whales have been encountered on each excursion with Montauk’s Viking Fleet, says Arthur Kopelman, a marine mammal population ecologist and CRESLI president.

“I expect this year to be like all the other years with a high rate of finding whales and hopefully the tremendous diversity that we typically get,” including humpback, minke and finback whales, Kopelman said.

The Captain Lou Fleet’s new boat, the Atlantic Pearl, is a 100-foot Yank super-cruiser that can take up to 149 passengers. The boat has two decks for viewing and a galley that sells soft drinks, burgers, hot dogs and packaged snacks.

On this trip, most passengers stayed on the sun-drenched deck with binoculars and cameras ready as Dionisio narrated from the bridge and looked for whales on the horizon.

“Thar she blows!” Dionisio shouted when he saw a spout, the first of five humpbacks seen about two miles off the Rockaways. “Humpback at 2 o’clock.”

A little whale-watch humor bubbled up after a humpback spouted upwind, giving passengers a sample of its seafood diet.

“Did you smell that? It’s the whale’s breath,” Dionisio joked.

As whales continued to surface, spout and show their tails, passengers expressed surprise that a Nassau County whale-watching trip could be successful.

WHEN | WHERE 11:30 a.m. July 19, 26, Aug. 1, and Thursdays through August, weekends in September and October aboard the Atlantic Pearl/Captain Lou Fleet, 116 Woodcleft Ave., Nautical Mile, Freeport

WHEN | WHERE 2-7 p.m. Wednesdays and Sundays through Sept. 2 aboard the Viking Fleet from Montauk Harbor