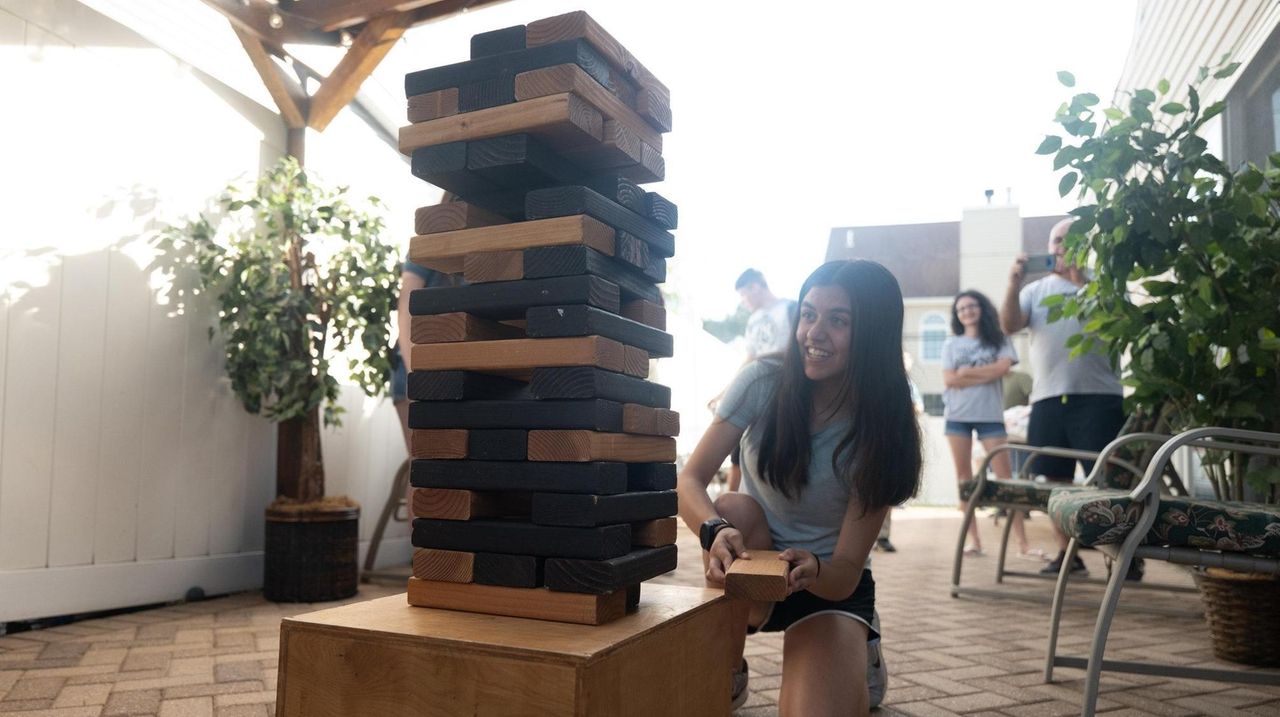 With people spending more time at home during the coronavirus outbreak, families turned to oversized backyard games to bring everyone together. Credit: Kendall Rodriguez

When it comes to games this summer, bigger is better.

Oversized lawn games are all the rage across Nassau and Suffolk. It seems many Long Islanders will be spending more time in their backyards than usual, therefore family entertainment is on the agenda.

“In many ways, these games incorporate a love for the outdoors,” says Omar Clennon, 40, of Freeport, who purchased an oversized Connect Four-type of disc-sliding game called Four-in-a-Row ($250-$275). “As we become a more tech-driven society, people are focused on being indoors. This is a great way to bring people outside and come together.”

Clennon bought his game from Don Williams of West Babylon who handcrafts each one out of pinewood from his garage and Let’s Craft in Westbury. Williams, 47, started his side company Kuniworks Co. after seeing his uncle play oversized Jenga at a family reunion.

“I tried making my own version called Backyard Blocks and enjoyed doing it so I just kept knocking them out,” says Williams, who does all his business through Facebook and Instagram. “There’s definitely a demand. I get random emails and direct messages requesting these games all the time.”

When Steve Bergonzi of Levittown was at his block party last summer, he brought out the set of Backyard Blocks ($90-$175) he purchased from Williams and the stacking game took off.

“Even with all the inflatables and entertainment we spent money on, everybody wanted to play with the blocks,” says Bergonzi, 48. “When it got dark, we brought it into my house. I had over 20 people playing this game in the middle of my home. It was the hit of the party. I could not believe it.”

Each of the 54 Backyard Blocks pieces are 3” x 9” and can stack up to 4-feet high while the Four-in-a-Row game is 48” tall x 36” wide holding 48 discs. Players enjoy not only the gaming aspect but the king size of these products.

“Kids love the coolness factor,” says Jennifer Jones, 48, of Mastic, who bought a Connect Four from Rocky Shores Woodwork in Rocky Point. “With the large size, you’re not just stuck sitting at a table. It gets you up and moving, which is healthy.”

Bergonzi adds, “Everyone likes bigger things. It’s the 'wow' factor. The minute you see it, you want to play it. Even if you don’t play, you want to watch.”

There’s also a sense of nostalgia because it brings people back to their childhood when they played the tabletop board game versions. “It makes you feel like a kid being outside having fun,” says Bergonzi. “Plus, you are being active away from your phone or computer.”

Long Island’s own lawn game creator Robert DiGiacomo, 45 of Lake Grove even made an oversize version of his original game PaddleZlam called Ultimate PaddleZlam ($59.99), which is like a pickleball version of KanJam.

“It appeals to a younger age group,” says DiGiacomo. “Ultimate PaddleZlam is more like a sport because it’s a high endurance game with nonstop action.”

Brian Ballou of East Islip is enjoying playing Ultimate PaddleZlam with his wife and kids these days.

“The larger cones make your goal easier to hit which opens up the game to more people,” says Ballou, 46. “I also love the new paddles because they are easier to handle.”

Many predict the popularity of these games will rise with folks sticking close to home this season because of the pandemic. “People want to be around friends that they know and trust in a controlled setting,” says Clennon. “I think it’s the nature of the time, therefore, these games will serve as solid entertainment.”

WHERE TO BUY OVERSIZED LAWN GAMES

2:02
Rockaway Beach has much to offer summer daytrippers
Where to get great gelato on LI
2:44
Eternal Con returns and more: Here's what's happening on LI this weekend
LI drive-in, outdoor movie and concert schedule for summer
2:44
10 events, things to do this weekend on Long Island
3 places to try over-the-top fries this weekend
Didn’t find what you were looking for?