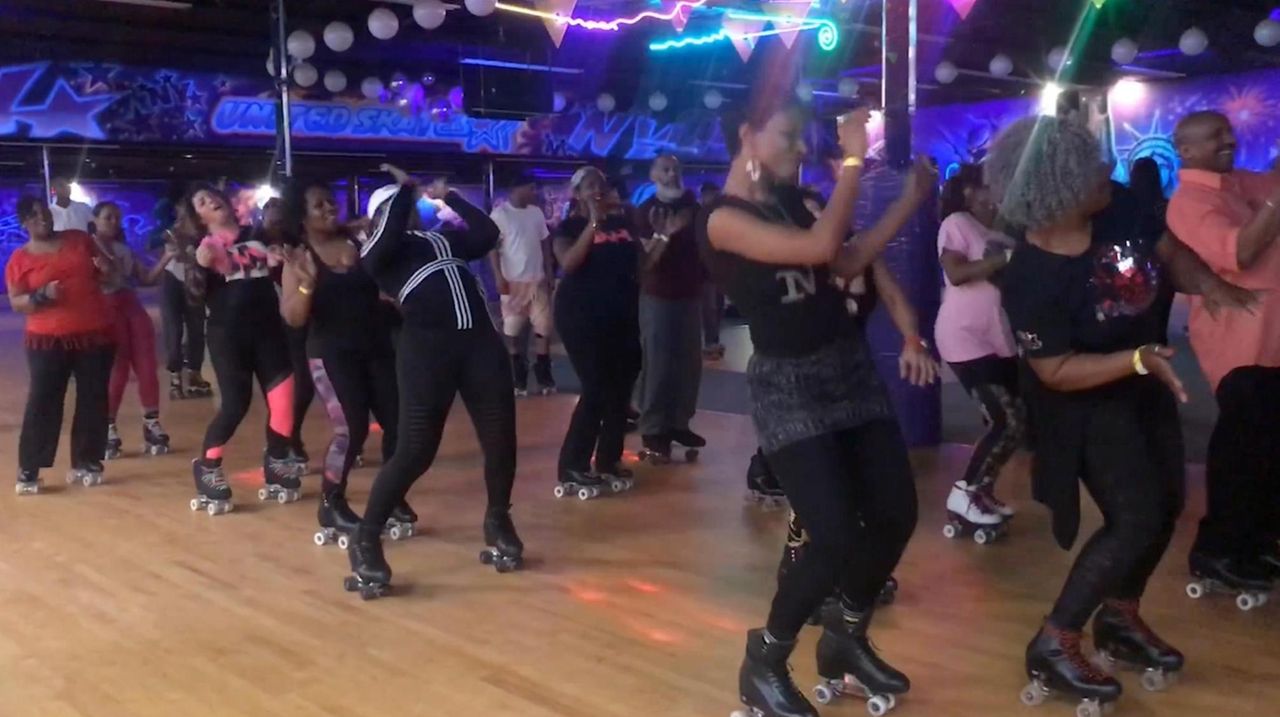 On Monday nights, adults can get on a roll at United Skates of America in Seaford. The roller rink hosts Adult Night, when Long Islanders from ages 18 to 80 hit the rink from 8:30 p.m. to midnight. Credit: Newsday / David Criblez

Bob Mouzakes is about to make his move.

The 57-year-old from East Patchogue turns on a set of white blinking lights at the bottom of his roller skates indicating he’s getting ready to pull off “The Coffin.” After building speed, he bends his right knee while lying an inch off the floor head-to-toe as his left leg extends horizontally, evenly balanced with his left shoulder.

“I get so low I can pick a handkerchief off the floor with my teeth,” says Mouzakes, who has been roller skating for 43 years. “I get a rush from doing it because it’s something that most people can’t do.”

It’s Adult Night at the United Skates of America in Seaford, where Long Islanders from ages 18 to 80 hit the rink every Monday from 8:30 p.m. to midnight.

Putting on a set of wheels transports these skate veterans back to their teens, when life was more carefree. Whether they were forming trains around the rink or weaving through the crowd, skating made them feel alive. Now they want that vibe to continue.

“Roller skating is something these adults have grown up with. They like to skate because it brings back such good memories,” says United Skates general manager Lisa Ingenito. “Some people are just starting to realize that roller skating is still out there. It’s something people thought was gone, but it really isn’t and it’s not going away anytime soon.”

LOOKING BACK AT LACES

For Graceann Porter of Floral Park, roller skating hits her nostalgia button. She spent a lot of her free time as a teenager doing laps around the rink at Laces in New Hyde Park on Hillside Avenue, which closed in 1991.

“Laces was my home away from home,” says Porter, who is in her 40s. “I’d take two buses to get there, then I’d skate all day and all night. That’s where all my friends were.”

Back in the day, Porter wore colored jeans with matching sweatshirts and she always brought her own skates.

“You wouldn’t be caught dead wearing a rental skate. It wasn’t cool,” she recalls. “Everyone had a dance plug, not the full stopper at the tip of the skates, because it allowed you to do spins on your front wheels.”

Today Porter, who is organizing a Laces reunion on April 13 at United Skates, goes skating with her 6-year-old son, Liam, and her grade-school friend Teri Takmopoulos of Merrick, who proudly carries her own skate bag into the Family Skate session on Sundays at noon.

“I couldn’t afford really good skates when I was young, so now that I’m an adult I was able to get the real deal — leather Riedell skates with RollerBones wheels,” says Takmopoulos,also in her 40s. “The bearings in those wheels grip the floor better, plus they can help you go faster.”

DJ Arson spins on Adult Night, mixing everything from disco to pop to hip-hop, catering to everyone’s listening tastes as long as the records can groove.

“Skating is more versatile and unique today,” says DJ Arson. “It’s not just skating around several laps in a circle for hours, but doing different techniques.”

Seeing those fancy moves drew John Merck, 46, of North Babylon, to get back out on the floor. He has mastered a technique called The Matrix, where the skater goes on his or her front toe wheels pointed in and then spins.

“It’s an art form. It’s like dancing on skates,” says Merck, proudly wearing a Skatehead T-shirt. “I get locked in with the music and the groove takes over. You are stridin’ along, doing some moves and really feeling it.”

His buddy Jeff Turner of Amityville used to be a wrestler and a track star in high school. Today, the 53-year-old skates to keep in shape.

“When I was in high school, I was into sports, then over the years I stopped working out. Skating brings that athletic excitement and exhilaration back,” he says. “This is an activity where you are always learning. You try to get better every week.”

Instructor Tanya Dean teaches Skaterobics, every Friday night at Hot Skates in Lynbrook at 8:30 p.m., which combines roller skating, exercise and dance. Her students then skate together every Adult Night at United Skates, where Dean often leads them in a Skaterobics routine in unison.

“This is an exercise that’s safe and healthy that we can do for the rest of our lives,” says Dean, 56. “You can burn up to 700 calories per session.”

Mark Blagrove, 56, of St. Albans, Queens, says he is diabetic and skating helped him lower his blood sugar and blood pressure without medication.

“I really feel the difference,” he says. “Plus, this is some of the most fun I’ve had in years.”

Randel “Pee Wee” Turner, 69, of Bethpage, has been skating more than 50 years. He was a member of Long Island’s Nightrollers, a club that traveled all over skating at different rinks.

“We’d go to places like the Skate Key in the Bronx, Empire and Sweet Ruby’s in Brooklyn following different DJs,” he says. “That’s how I met my wife.”

Turner’s wife, Patricia DePasquale, who is in her 50s, spins in front of him while he smiles on the sidelines. The couple is on wheels together every Adult Night where Pee Wee keeps everybody moving.

“You come in here, you come to skate,” he states with conviction. “Don’t worry about standing around looking at your cellphone.”

Skaters like to congregate, share stories and even teach each other moves as a way of passing on the passion.

“When new skaters come in, the older skaters are always willing to help them,” says Jeff Keene, 57, of Roosevelt.

Harmony is the main theme among skaters,  who are quite diverse in age, race, shapes, sizes and tax brackets.

“Everybody comes from different backgrounds and it doesn’t matter,” says Keene. “Nobody is against anybody here. We are all one family.”

Retro restaurant-arcade opens in Levittown
Kickstart the holidays with these events happening on LI
10 events, things to do this weekend on Long Island
Decorate your home with unconventional holiday wreaths you can make or buy
Events by night to celebrate Hanukkah on Long Island
New LI restaurant debuts 9-course, ever-changing tasting menus
Didn’t find what you were looking for?