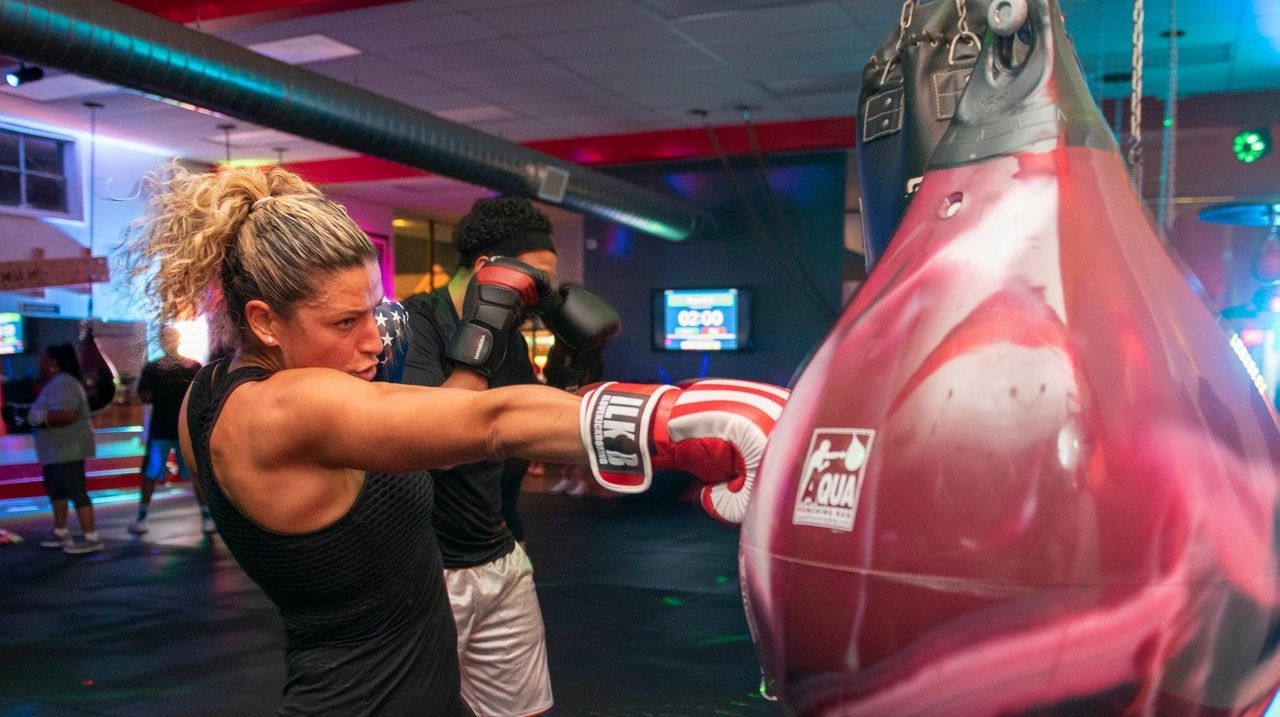 CardioBox Nightclub Experience is a Saturday night class at New York Fitness & Boxing in East Northport that includes a DJ and after-party at a restaurant. Credit: Howard Simmons

It’s around 10 on a recent Saturday night and multicolored strobe lights command attention from behind a storefront in a mostly darkened portion of Jericho Turnpike in East Northport.

Inside a DJ plays loud, thumping music for an enthusiastic and energetic crowd, but the “partygoers” aren’t sweating it out by dancing just yet — they’re sweating from pummeling a punching bag in their boxing gloves and by doing frantic squats, jumping jacks, lunges, crunches and pushups.

After two 45-minute sessions of boxing-inspired exercise with a pair of 15-minute breaks, most of the 35 or so participants head over to the nearby Pomodorino Italian restaurant in Huntington to end the night there with dancing, some complimentary healthy snacks and a free drink.

It was all part of the first “CardioBox Nightclub Experience” offered every Saturday night from 9 p.m. to 2 a.m. for $30 at the door by New York Fitness & Boxing in East Northport.

“The CardioBox Nightclub Experience is for all skill levels and abilities,” says New York Fitness & Boxing CEO and co-owner Edwin Rivera of Huntington Station, who was presiding over the action on opening night. “The program will appeal to fitness-minded people who love to dance, hear live DJ music and enjoy a nightclub atmosphere.”

Rivera notes the idea was inspired by similar gyms in Manhattan as a way to expand offerings that appeal to millennials and Gen Xers. But he upped the experience by adding a live DJ to spin the class music and a free drink pass to a neighborhood bar.

“Partnering with local bars allows the customers to continue the nightclub experience and dance the night away,” Rivera says.

If boxing and dancing seem like an unlikely combination — Rivera sees strong parallels.

“Boxing is a form of dance and the music has a way of keeping you focused and getting you through the program even when you’re exhausted,” he says. Recalling the late Muhammad Ali’s moves in the ring Rivera adds, “Dancers learn dance routines, boxers are no different. Boxers learn upper and lower body combinations that look and feel like dancing.”

The weekly event is advertised largely through social media and Rivera plans to have different restaurants and bars participate monthly in the after-party portion of the evening.

“I love it, this is super cool,” said Raquel Skellington, a 23-year-old model and actress who lives in Melville, as she was taking a 15-minute break from the exercising. “Even when I was younger I was looking for something like this.”

Christian Ceglia, 20, of Locust Valley, participated in the workout at the gym and then followed the crowd to Pomodorino. Once at the restaurant he said he’d like to do the evening again.

“I play football, so I like getting hit,” Ceglia says, referring to the boxing exercises.

“It was intense workout,” Diktas says. “It definitely kicked our butts — I didn’t expect to go 45 minutes straight — and we feel like winding down, so why not have a drink?”