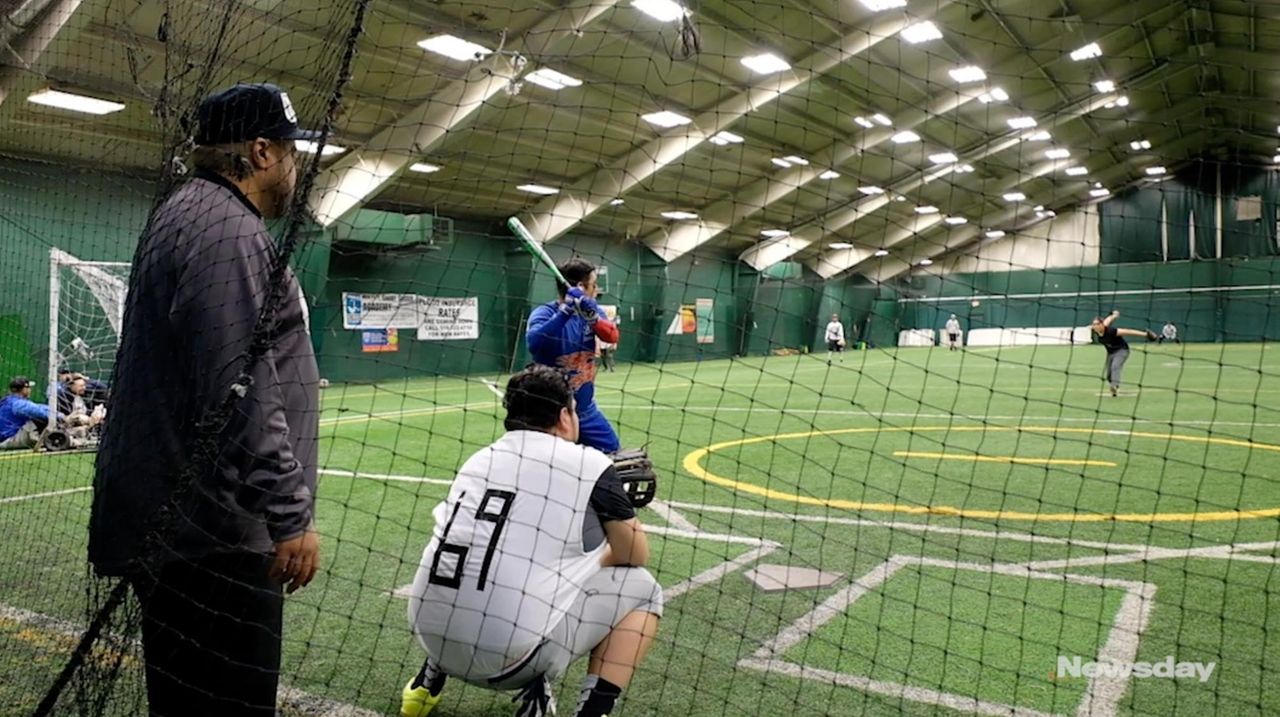 Tony Mercado, the commissioner of a softball league that plays from 1 to 7:30 a.m. on Saturdays and Sundays indoors at the Long Island Sports Complex in Freeport, explained the popularity of the league's games despite its early morning hours.  Credit: Jeff Bachner

The ping of a metal bat hitting a line drive, the chugging of footsteps charging toward first base, the roar of people cheering — these are all commonly heard during a softball game, but not usually at 3 a.m. That’s when the Indoor Softball League holds games at the Long Island Sports Complex in Freeport.

“I came up with the idea because I wanted to find a way to play during the winter,” says Tony Mercado, the organizer and mastermind behind the Indoor Softball League, which plays from 1 to 7:30 a.m. most Saturdays and Sundays between late November and early March.

Anyone 18 and over can join, and although individuals are allowed to play, Mercado says he prefers the cohesion of teams. “We’ve had as many as 12 teams come to play in one night,” he says. There are coed, women-only and men-only teams as well as different styles of play, from the basic underhand throw to the high-arching slow pitch. Teams pay between $250 and $400 to play per night. The fee covers costs to use the venue, any sort of uniform and prizes.

It’s basically the same game played outdoors but tailored to the arena. The space has a ceiling, so hitting large-blast home runs are virtually impossible. Successful hits are flattening line drives or ground balls. The 35-by-75-foot field is turf on concrete, so sliding isn’t an option. Instead of nine fielders, there are eight, and games are four innings a piece, so several can take place in one night. All batters start with counts of one strike-one ball, which also speeds up the action.

Each night is its own tournament. “Tonight, you’re the champ,” laughs Mercado, 38, a doorman from Flushing. “Then tomorrow, you’re no longer the champ.”

At the end of each season, Mercado schedules something out of the ordinary, such as a “World Softball Classic” where players represented countries of their ancestors. Teams will play with wood bats for the season closer this month, he says. Players usually use metal ones.

The idea for an overnight league happened by chance as Mercado searched for venues in the tristate area, he says. Most were booked, he says. When he approached the Long Island Sports Complex, “they told me the only winter hours they possibly had were at night,” he says. Mercado usually works until midnight most days, “so I was like, I’ll take it!”

The hours are not easy for some.

“The first time I played, I made the mistake of laying down for a minute,” says Tony Wong, 28, a showroom manager from Bayside who plays for the Polar Bear CoEd Pick-up Softball team. “I could barely get back up.” He says the trick is to keep moving, “and I drink these,” pointing to a sack of energy drinks.

Others says nocturnal play is no problem at all.

“I’m not normally a night person, but the Adrenalin keeps me going, so it’s no problem,” said Giovanny Valencia, laughing. The 32-year-old financial officer from Rego Park says his girlfriend thinks he is “crazy” for playing softball at such odd hours.

Valencia organizes his team, the QBRI (Queens Bridge Randall’s Island) Softballers via Meetup.com, and says he has a total roster of 740 members and “our games fill up every time.”

Valencia’s girlfriend Bonnie Stringer, 30, also from Rego Park, attended a recent game, preparing “by grabbing a venti cold brew from Starbucks on the way here.” She seemed peppy enough, but when asked what she normally would be doing, she is quick to say, “sleeping.”

“It’s actually fine,” says QBRI member Stephanie Hatlee, 29, an executive assistant from Crown Heights, of the unusual hours. “Once you start playing, you lose track of what time it is. You just don’t want to check your phone and see what time it really is.”

“I worked all day, never made it to taking a nap, and now I’m playing and feeling good,” says Steve “Spider” Wilson, 44, a carpenter from Ozone Park, at a recent game. He organizes the Polar Bears and says he sees nothing strange about staying up all night to chase down ground balls and swing away: “What else would I be doing now? Sleeping? Going to a club or a bar? This is so much better.”

WHEN WHERE 1 to 7:30 a.m. most  Saturdays and Sundays between Black Friday in November and mid-March at the Long Island Sports Complex, 103 Mill Rd, Freeport

Lifelong friends reopen longtime LI pub
Christmas party pop-up bars open on LI this season
5 ways to enjoy the return of the Dickens Festival in Port Jefferson
1:47
LI artists find splendor in the glass
Marilyn Monroe-themed eatery replaces longtime Italian spot
These cooking classes will take you around the world without leaving LI
Didn’t find what you were looking for?