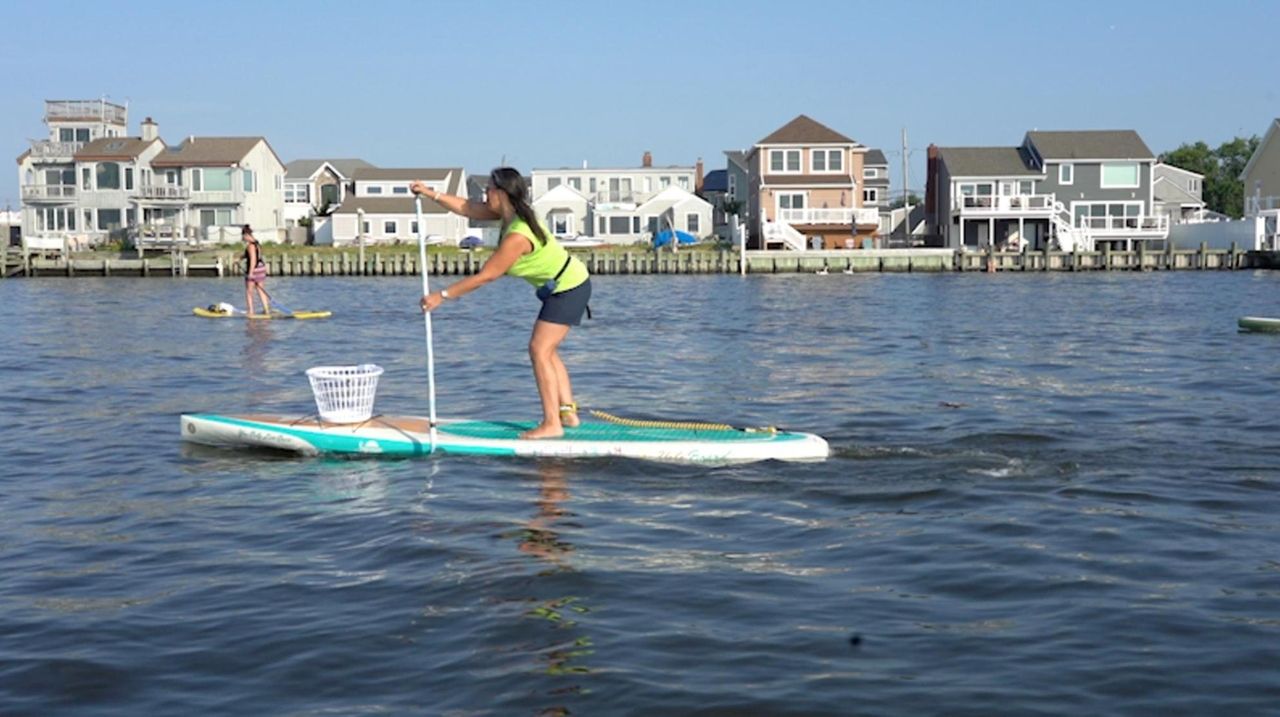 Once the sun is up, so are these four-dozen paddleboarders from as far as Westhampton and Long Beach. At the helm, Karen Marvin, organizer and owner of Long Island’s largest SUP (stand up paddleboard) shop gathers her group of mostly locals on a mission to clean up the canals and creeks of Babylon.

Every Sunday at approximately 7 a.m., weather permitting, they hit the canals for about two hours around the Long Island Yacht Club to collect as much trash as possible.

On a recent weekend, one of the largest groups to date collected nearly 300 pounds of trash out of the Santapogue Creek in West Babylon (that's behind the old Kmart on Montauk Highway), in near 90-degree weather.

“I grew up on the water and if we can't keep the waters clean, we’re not going to have it to paddle in,” Marvin, 50, says. “Sometimes, we do such a good job of cleaning, there’s not much when we go back the next week. It puts a big smile on your face, like, ‘wow we are really making a difference.’”

Each week, the group selects a different canal or creek to clean — say, Fosters Creek or Carlls River — from about eight waterways they have essentially adopted. In addition to the countless plastic bottles and bags, the group has also found balloons, clothing, cans, carpets, tents and old tires. Hauls average 20-30 pounds, Marvin says.

Monthly, the team visits Fox Island, a small, uninhabited island next to the "Lindenhurst cut" in the Great South Bay just north of Fire Island. Those group paddles leave earlier — around 6 a.m. on Sundays — to accommodate the roughly 50-minute paddle across the bay. About 300 pounds of garbage is collected each time.

Full hearts — and bellies, too. Paddlers receive a sense of accomplishment and good doing as well as a healthy breakfast on the beach. After the paddle, Marvin supplies paddlers with yogurt, fruit, hard-boiled eggs and bagels on the beach back at the yacht club. “It feels good to do something good for the environment,” she says.

Paddleboarder Steve Pace, 64, of West Islip, has been a part of the paddle cleanups since the start about six years ago. On this particular trip, he single-handedly gathered about 30-40 pounds at the tip of his board.

“It’s challenging at times, but I think every little bit helps,” he says of maneuvering over the water while also holding on to the trash. “We can get to shallow places people probably have never cleaned before.”

Also among Sunday's paddlers, was Julie Munaco, 52, of Farmingdale. She has been cleaning the waters for three years both with the group and during solo paddles. She says she does it with the hope that others will do the same.

Paddles run year-round but may be canceled for severe weather.