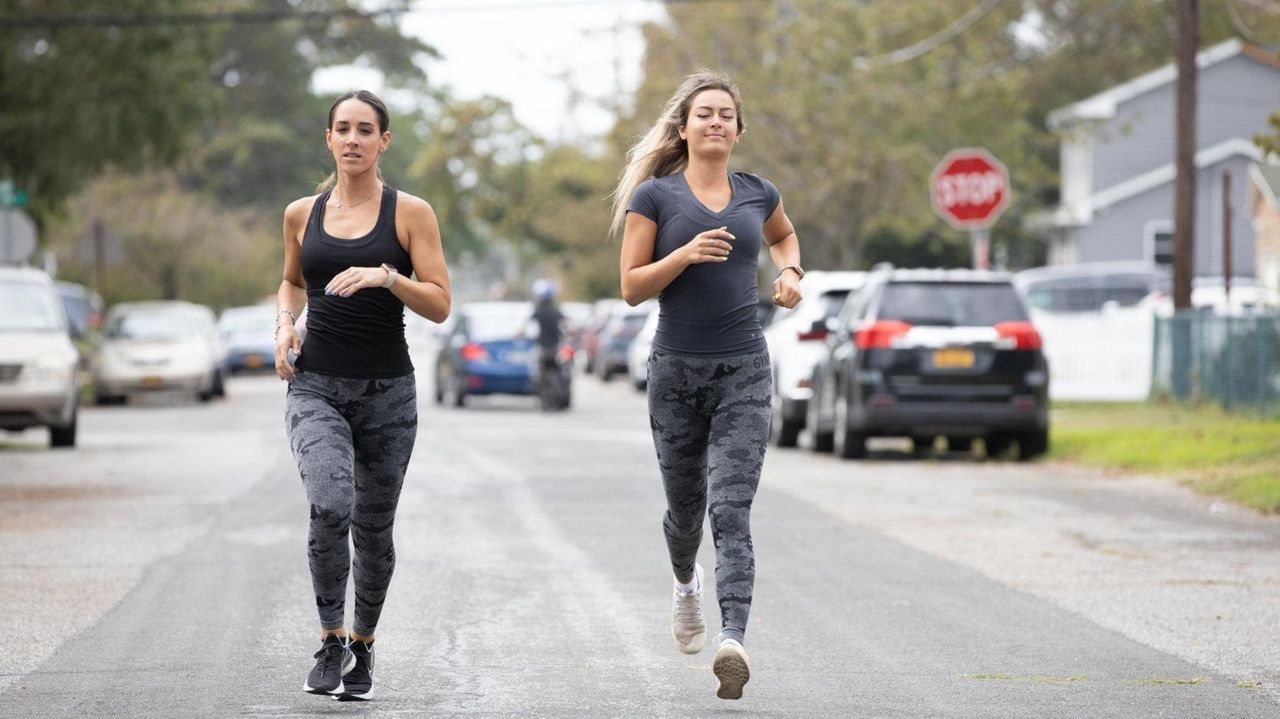 Lindenhurst sisters, Erica and GinaMarie Ferretti stayed in shape by holding each other accountable to home workouts in the early days of quarantine.  Credit: Kendall Rodriguez

It took a pandemic for me to drop 10 pounds.

Gone were restaurant meals, with their bread baskets and desserts. Gone were office parties to celebrate birthdays, awards and departures, with their requisite cakes. Gone was Wednesday night Mahjong with its cookies and chips.

And in a few weeks, gone were five pounds.

With social obligations also going “poof,” I had no choice but to turn to exercise for entertainment. My husband and I discovered a wooded hiking path that we regret not having known about previously. And vegetables? I’ve never had so much time to experiment with eggplant — baked with Parmesan cheese, stir-fried with an Asian-inspired sauce, in homemade baba ganoush. I met my new BFF — Best Food Friend — spaghetti squash after a delivery substituted it for butternut squash.

I’m now down 10 and hope to keep going. Other Long Islanders have also dodged the dreaded “Quarantine 15” and instead headed in the other direction. Here are five things they say helped:

1. Boredom. “I had nothing else to do,” says Lawrence Sprung, 45, of Smithtown, about riding his Peloton stationary bike 30 to 60 minutes daily. “My longest streak was for 100 straight days,” says Sprung, who owns a wealth management company. He’s 6-foot-3 and dropped from 212 to 202, he says.

Boredom also motivated Erica Ferretti, 23, a Lindenhurst nursing student. “The first weeks of quarantine … I watched TV, was on my phone and was sleeping more than I was eating. At one point I just got so bored and had no energy.”

Her sister, GinaMarie, 28, who also lives in Lindenhurst, urged Erica to join her in a workout, and Erica reluctantly did. Afterward, she thought, “Well, this took up an hour and a half, so let’s just do it again tomorrow.” Erica has lost about 10 pounds. “But the crazy transformation for me was more in terms of muscle gain,” she says. She can lift more weight and do more pushups. Says GinaMarie, “I honestly feel like it kept us sane through quarantine. It was something to look forward to.”

Westbury personal trainer Bonne Soffer has seen her free online YouTube following grow during the pandemic as people strive to get in — or stay in — shape. “Everybody who’s talked to me has said, ‘What else am I going to do? I have time now,’” Soffer says.

2. The Boomerang Effect. The shock of gaining weight spurred Sprung’s son Zachary, 17, into action. The high school senior initially took up baking to pass the time during quarantine. “Bread, cinnamon rolls, cupcakes, cookies. I would bake it and then eat it,” he says. “We were lounging around, watching TV and playing Xbox.”

“Sitting indoors is really the enemy,” agrees Soffer. “People have to tell themselves, ‘No, I won’t go to the refrigerator 15 times today.” Normally, Zachary would be playing ice hockey for the Kings Park High School hockey team, so he called his trainer and they came up with an at-home series of workouts that Zachary and his brother, Jeremy, 14, could do using weights and resistance bands. The oven was retired, and Zachary, who is 6 foot 1, went from 220 to 190.

3. No commute. “I used to commute an hour and a half each way to the city from Long Island. Now that I don’t have that commute, I have more time to exercise,” says Azadeh Aghajani, 37, a finance director from Glen Head. She started to follow Soffer's workouts, watching them at 6:30 a.m. in her basement before her 8-year-old daughter woke up. She shaved off about seven pounds — including a few she had gained at the beginning of quarantine — and feels healthier and happier, she says.

4. No hustle-and-bustle. Typically, Melissa Connolly, 53, vice president of university relations for Hofstra University in Hempstead, would rush to work events and grab food on the go. “I’m getting carbs, because that’s what’s available,” she says. Working from home changed that. “Being able to control my food better, being able to control when I ate, what I ate, made a big difference.”

Physician assistant Maria Scorzelli, who works at the Northwell Health-GoHealth Urgent Care in Glen Cove, says that many people may be actually eating better than usual during this time. “When you’re at a restaurant, you want to treat yourself. When I cook dinner at home, I don’t make dessert,” Scorzelli points out.

Connolly also used the opportunity to work from home to combine tasks with exercise. “During the day, I would walk outside and take a meeting on my headphones and get 200 steps in,” she says. Each day, she tries to walk 10,000 steps so that on weekends she’s ready to tackle hiking challenges in the Catskills or on the South Teconic Trail. Connolly is 5-foot-5 and has taken off 35 pounds since January, the majority after the pandemic started, she says.

5. A desire to stay as healthy as possible. Erica and GinaMarie’s dad, Gerry Ferretti, 55, was on his own get-in-shape quest. Ferretti, who runs Seaford’s Long Island Film Festival, even made a short film in which he played himself both as a couch potato and a Rocky-esque athlete. “You can’t stay inside like this all day long eating chips and cookies,” the motivated self says to the lazy one, who initially gained nine pounds during quarantine. Says Ferretti: “I was that guy who would go to a place like Ciao Baby and go, ‘Look at these portions!’” Ferretti challenged himself to jump rope in his living room, converted another room in his house to a gym, and got his bicycle out. He took off that nine pounds and more. Fear motivated him as well, as he is a cancer survivor, he says. His goal is to drop seven more pounds, to wind up 5-foot-9-and-a-half and 175. “You know what I’m training for? Life,” he says. “I started realizing that the healthier we are, the longer we’re going to live.”