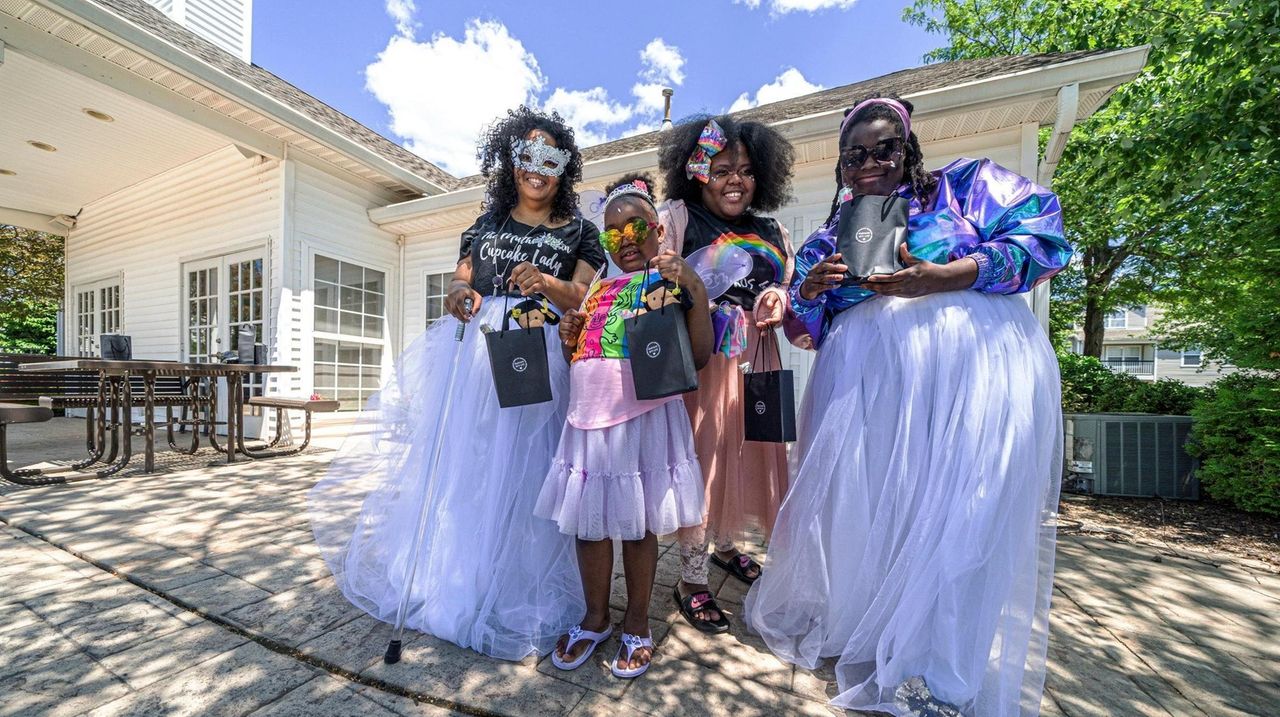 Lita Morales, 38, left, her niece Payton Stewart, 6, her daughter Serenity Boyd, 16, and Tasia Morales, 26, and all from Melville get ready to drop off desserts and gifts to a home in Melville on June 7. Lita is a member of a Facebook group called Dessert Fairies of Long Island.

A new sport has emerged during the current pandemic: Dusting.

It has nothing to do with household chores. It’s primarily women playing Santa and surprising other families with gifts left on their doorsteps. They call themselves “Wine Fairies” because that’s how it started, giving wine as the “fairy dust” — but now women are “dusting” houses of people they don’t even know with lottery dollar scratch-offs, gift baskets, Milano cookies or flowers.

“Our group is about giving. The point is about doing something nice for somebody,” says Connie Bayer, 43, a stay-at-home mom of five from Miller Place, who launched the Wine/Treat/Surprise Fairies of Long Island Facebook Page two weeks ago. “You put a smile on somebody’s face. So many people are having a good time with this, and it’s become contagious.”

Here’s how dusting works: People prepare gifts bags, it could be five, it could be twenty. Then they post a photo of the gift items on the Facebook Page and say where they’ll be dusting — as in “I’ll be dusting today in Mt. Sinai” — and people who want to receive a gift put their addresses in the comments. The duster chooses who to leave the gifts for, it could be someone she knows or somebody new. The duster can choose to put her address in the post in case those who receive want to dust her in return.

Some people are going out dusting in fairy wings or other costumes — Cathy Petraccione, 40, of Seaford, who works in import/export, and her sister, Lori Rodriguez, 45, a real estate operations manager from Massapequa, plan to go dusting dressed as "wine and cheese" and wear wineglass shaped sunglasses. "Everybody's getting a kick out of it," Petraccione says of the dusting phenomenon.

“At first I was kind of skeptical because I don’t really like posting my address online for everybody to see,” says Michael Marchese, 30, of Bay Shore, who works in an auto body shop. “Two days later I go outside and I had a little thing of candy and a little bottle of alcohol and some snacks. I said, ‘That’s pretty cool.’ "

Some people are asking to specifically dust health care workers, wives of police officers, those celebrating a birthday or people who have never been dusted before. Courtney Simonetti, 34, of East Rockaway, who works in marketing, asked to dust women who are in relationships with men of other ethnicities, as she is. “Right now the world is in a really difficult place and it seems divided,” she says of why she chose to give them gifts.

“People sneak up to your house, it’s a hoot,” says Bob Richards, 60, of Westbury, who works in entertainment production. His wife, Kathy, 52, a stay-at-home mom of three, started the men’s group because she thought the husbands were being left out. She says the men call their outings “saw dusting.” Bayer jokes that her husband, Chris Hempfling, 54, who works in the auto wrecking field, has started a “Fairy Dusting Spouses Support Group for Men.”

Bayer’s groups are only open to people invited by others in the group, and she says she checks their Facebook Page before accepting them. Her rules also say no home-baked goods allowed. “I don’t know if you’re licking the spoon or your cat is walking across the counter,” Bayer says.

Wine Fairies of Long Island is open to anyone on Long Island older than 21, says Pamela Diehl, 37, of Levittown, a corporate director of rehab for a nursing home, who started that Facebook page. After members of that group dust for their first time, many will post that they’ve earned their “wings.”

“People are doing it ring and run style, or you can wait for them to answer,” Diehl says. “It started with wine. People took the idea and ran with it. I think it’s just building a sense of community. People are having bad days, maybe they lost their job, and they look outside and there’s a bottle of wine at their door.” Deihl also created a T-shirt with the logo “Kindness Changes Everything … Wine Fairies Long Island,” with proceeds go to Levittown Food Pantry; she says she's raised more than $5,000 so far.

“People are going through so much right now. It’s just so fun to see everybody get so happy even with the smallest things,” says Elizabeth Vogel, 35, of Miller Place, a CFO of an IT company and member of the Wine/Treat/Surprise group. She’s “dusted” 30 to 40 people.

Shianne Comodo, 23, a chef, and her mom, Nicole Ballato, 47, who works for a bank, have gone out dusting people six times in the Levittown area, delivering baskets with flip-flops, candy, candles, face masks, garden supplies and wine. “This is making me get up and do stuff,” Comodo says.

“If I hadn’t started this during COVID-19, it probably wouldn’t have taken off because people have busy lives,” Bayer says. She says she thinks that once the coronavirus era is behind us, this will be one of the happy memories people will have from this time period and that women will laugh remembering their dusting escapades. “This is what I hoped it would turn out to be.”