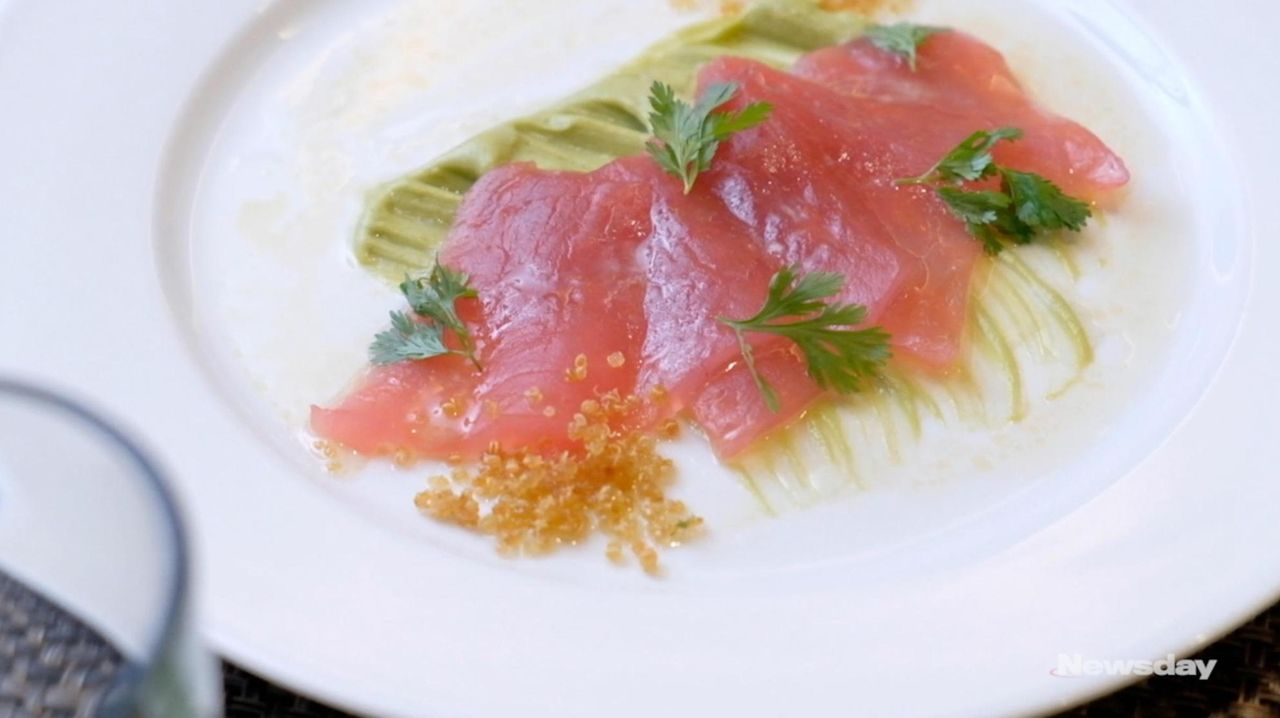 Executive chef of the Roslyn Hotel, Tomoyuki Kobayashi, demonstrated how he adds a mix of flavors to complement his yellowfin tuna sashimi.   Credit: Daniel Brennan

SERVICE: Good when not crowded

1221 at MFP, the most-awaited Long Island restaurant of the last 12 months, is performing adjacent My Father's Place, the legendary music club reborn last June in The Roslyn Hotel.

The sleek, stylized spot, designed as if to bring speakeasy chic to the windowless lounge of a classy cruise ship, has checked into what once could have been a subterranean exercise room.

It has a vaguely 1920s look, meant to evoke Gold Coast memories. The approach is streamlined, with some handsome touches, from the black granite-and-white onyx bar to the creamy, light-gray hues,

Photos of musicians, singers and concerts from My Father's Place decorate the low-slung space. You may sit near an image of Buster Poindexter, the reopening act. And remember the stars who made the original club a destination from 1971 to 1987: Springsteen, Marley, U2; Billy Joel, Richie Havens, Lou Reed; Blondie, Madonna, Joan Jett; The Police, the Ramones, Talking Heads.

But, nostalgia aside, the question is: if you're not staying at the hotel and not attending a concert, why eat here?

The answer: Tomoyuki Kobayashi. The chef, who earned three stars for Toku Modern Asian in Manhasset and redefined Louie's Grill & Liquors in Port Washington, has a new stage.

Be sure he's slated to perform. Any understudy won't do. Once, on a jammed concert night when Kobayashi clearly was absent and the staff certainly overwhelmed, the main course was chaos served cold, with a side of neglect.

During two later visits, with Kobayashi in the kitchen, the food generally was very good and service polished and attentive.

So, enjoy that amuse of lively gazpacho. Savor the opener of lustrous and silky yellowfin tuna sashimi, with the crunch of toasted quinoa for contrast. Leisurely, taste lobster carpaccio, glistening from yuzu and olive oil. Find summer in a terrific lobster roll, generous, bound with tarragon aioli, set on a brioche bun alongside housemade chips.

Then, there are the also-ates. Spicy tuna sushi comes across minced into mush on a rice-packed rival of a potato tot. Tiger shrimp and charred octopus are overcooked en route to rubbery and can't be rescued by their tasty supporting cast, whether blood orange or black garlic, elderflower vinaigrette or more tarragon aioli.

And the mishmash dubbed "chicken raclette," with too sweetly sauced thin rounds of meat and broccoli florets under a bland mantle of "Alpine cheese," even materializes minus the advertised kick of kimchee. A slice of cauliflower steak arrives so scorched that a storm of Sriracha aioli wouldn't rescue it. No hint of lemongrass accents the dry, braised short rib.

But a quartet of Frenched lamb chops is easily recommended, set on dabs of chimichurri and tzatziki. The house's Wagyu burger, a high-rise with tempura shiitakes, onion, wasabi-blue cheese, and honey-garlic soy, is cooked to order and excellent.

Tender roasted chicken, seared halibut and seared sea scallops also stand out, as does a fiercely herbaceous linguine with shrimp and garlic.

To go with all this, there are a few carefully crafted cocktails, led by riffs on the Manhattan and the Margarita; respectable wines by the glass and local brews, too.

For dessert, both the matcha panna cotta, despite pistachios and coconut flakes, and the mango panna cotta, even with candied ginger, are just too gelatinous.

You're better off with the tangy lemon tart, wobbly vanilla flan, cream ricotta cheesecake, brownie sundae, or the Asian pear, which is fueled by sangria and playfully finished with ice cream and cotton candy.