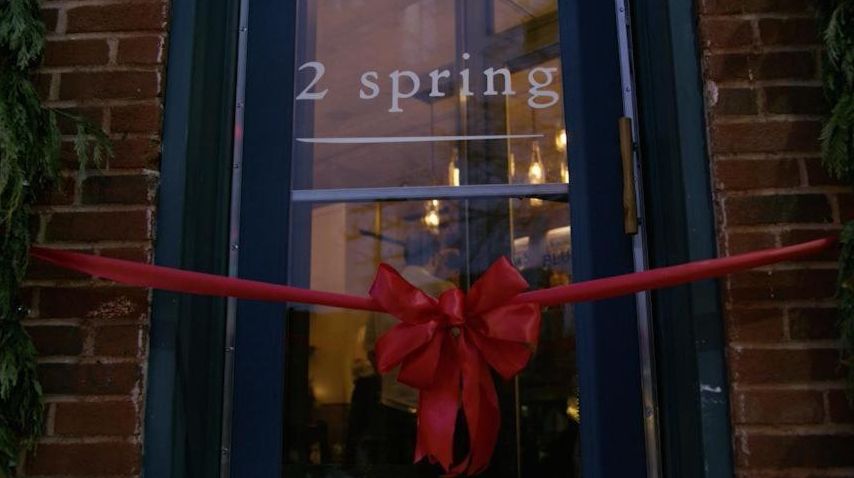 When 2 Spring opens for dinner in Oyster Bay on Wednesday at 5 p.m., diners will find no trace of the address’s former occupant. Gone are the lace curtains and baked ziti of Cafe Al Dente, replaced by a soaring New American restaurant whose chef, Jesse Schenker, vanquished Chef Geoffrey Zakarian in an Iron Chef plantain battle.

The restaurant’s first floor is dominated by a bar serving well-crafted cocktails, both classic and creative, as well as a wines-by-the-glass list that draws from New York, California, Italy and France. Dine at tables downstairs too, or ascend the stairs to the upper dining room.

Schenker (and his young family) moved to Oyster Bay after a very successful run in New York City. Named one of the country’s best young chefs in 2011 by both Forbes and Details magazines, he ran two well-regarded restaurants, The Gander and Recette (both now closed). The owners of the landmark 1925 building at the corner of Spring Street and Audrey Avenue, Oyster Bay residents Claudia and Michael Taglich, met the chef in Manhattan and lured him out to Long Island to helm their new restaurant. It took more than a year to transform the space.

The sleek dining room, in warm shades of wood and brick, is a fitting showcase for the chef’s concise, contemporary menu, featuring appetizers such as cod fritters with lamb ragu and curry aioli, small plates such as linguine and clams with shellfish bisque and large plates such as spicy lobster with harissa, bread pudding and carrot sauce.

With this new opening, the perennially underperforming Gold Coast town of Oyster Bay looks to be entering a restaurant golden age. 2 Spring follows on the heels of two excellent Italian restaurants, Autentico (February 2016) and Osteria Leana (May 2016) and the second location of the exceptional sushi bar Nikkei of Peru (January 2017).